The Federal Reserve is expected to provide more hints on tapering when it meets next week but may stop short of revealing a timeline. Amidst jitters about the Delta variant, markets could whipsaw if the Fed cites both progress and dangers ahead. Meanwhile, US and Eurozone GDP readings could further muddle the market mood as they will likely confirm the solid rebound in Q2 even as uncertainty about the outlook is increasing. If all that wasn’t enough for investors to digest, inflation numbers out of Australia, Canada and the US will come under the microscope.

It goes without saying that the July 27-28 FOMC meeting will be next week’s highlight as it will be the Fed’s last chance to telegraph any potential tapering announcements either at the Jackson Hole symposium in August or the September policy meeting. But when it comes to the July gathering, it was always going to be a tricky one because policymakers clearly want to see more data before making up their minds on tapering but, at the same time, they need to get the ball rolling, at least on holding some preliminary discussions about the timing and pacing of any reduction in their asset purchases.

Complicating matters even more is the escalation in virus cases due to the highly contagious Delta variant of Covid-19, which has now become the dominant strain in the United States. Caution about the growth impact fdangerfrom the Delta variant could widen the divisions within the FOMC on how soon the $120 billion a month in QE needs to be pared back. However, those details will probably not be disclosed until the minutes and all we might get on Wednesday about a looming taper decision is how much closer the Fed is to achieving “substantial further progress”. 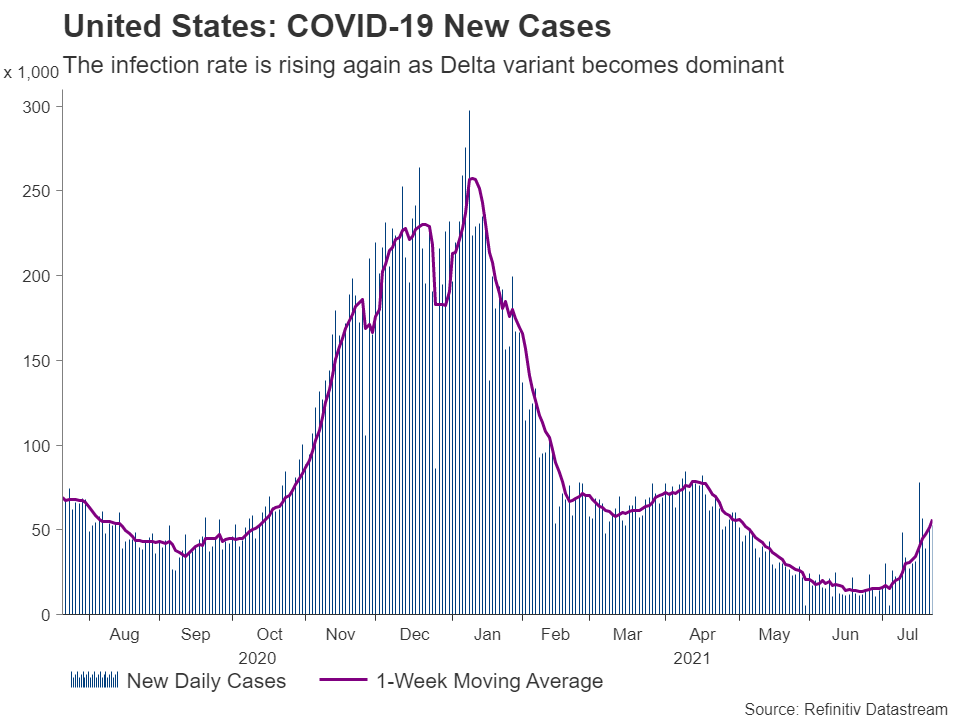 Should the Fed stick to the script and provide only subtle hints of tapering, the US dollar and Treasury yields may come under some downside pressure. But there should be support for the greenback from a barrage of indicators for the US economy.

New home sales will start the week on Monday and there will be more housing numbers on Tuesday and Thursday. America’s housing market is booming on the back of pent up demand and the pandemic-induced trend to move out of cities into larger suburban homes. However, housing construction has been hit not only by shortages in materials such as lumber but in labour as well. So the sector is being watched closely right now for signs on how long these issues will persist to get clues on the bigger question about whether higher inflation is transitory or not.

Other notable releases are Tuesday’s durable goods orders and consumer confidence index. But the more market moving data are likely to be the advance GDP report on Thursday and PCE inflation on Friday. The US economy is expected to have expanded by a staggering 8% annualized rate in the three months to June, surpassing the pre-pandemic peak in GDP. 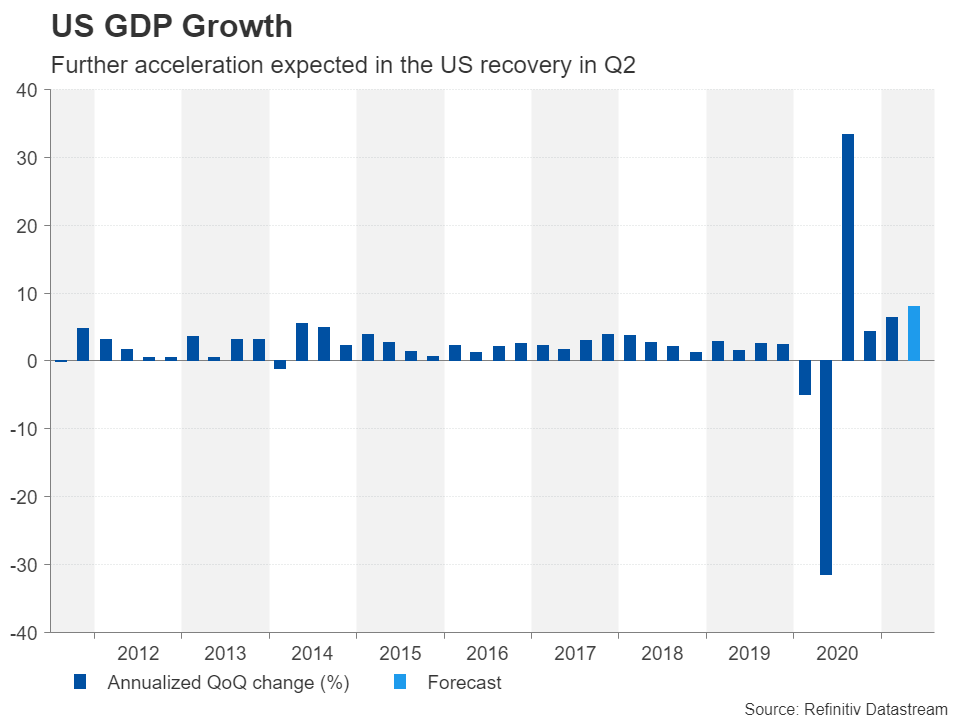 But investors will also be keen to see how strongly growth fared at the end of the quarter by digging through Friday’s personal income and consumption figures for June. And finally, the core PCE price index could rock the markets at the end of the week, as the Fed’s favourite inflation metric is anticipated to have increased by a worrying 0.7% month-on-month rate. 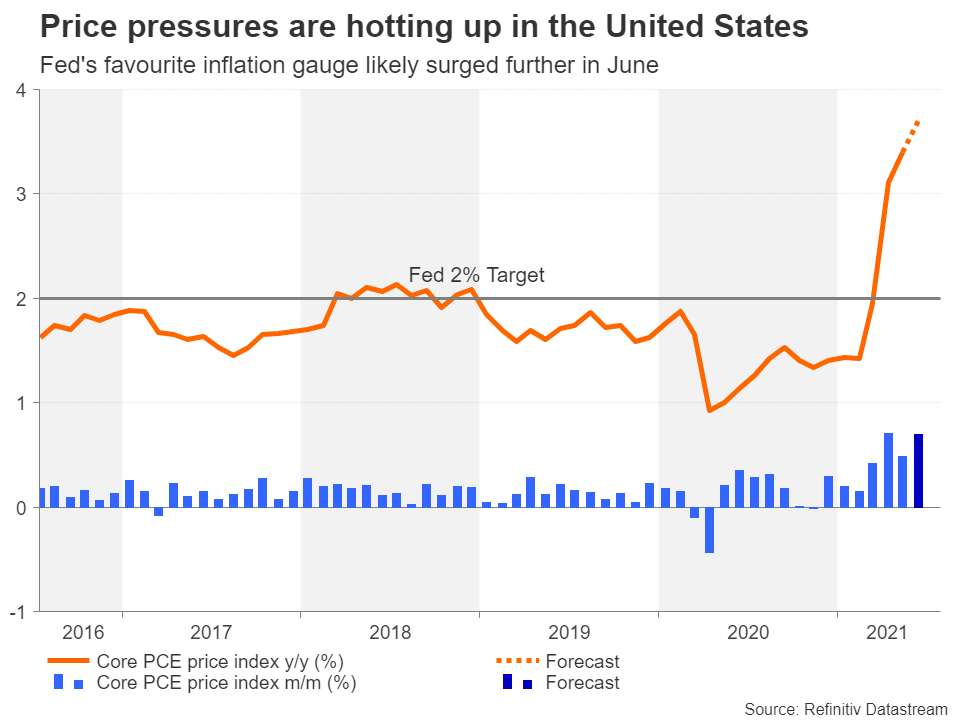 Inflation will be scrutinized in Australia and Canada too next week but may not necessarily do much in terms of shaping the policy outlooks for neither the Reserve Bank of Australia nor the Bank of Canada in any way. Australia’s consumer price index stood at just 1.1% year-on-year in the first quarter but could shoot well above the RBA’s upper target band of 3% in Q2. Whilst that would certainly help build a stronger case for policymakers to wind down their QE programme sooner rather than later, the fact that swathes of Australia have been placed under fresh lockdowns recently means that the RBA is more likely than ever to overlook any temporary spikes in inflation. 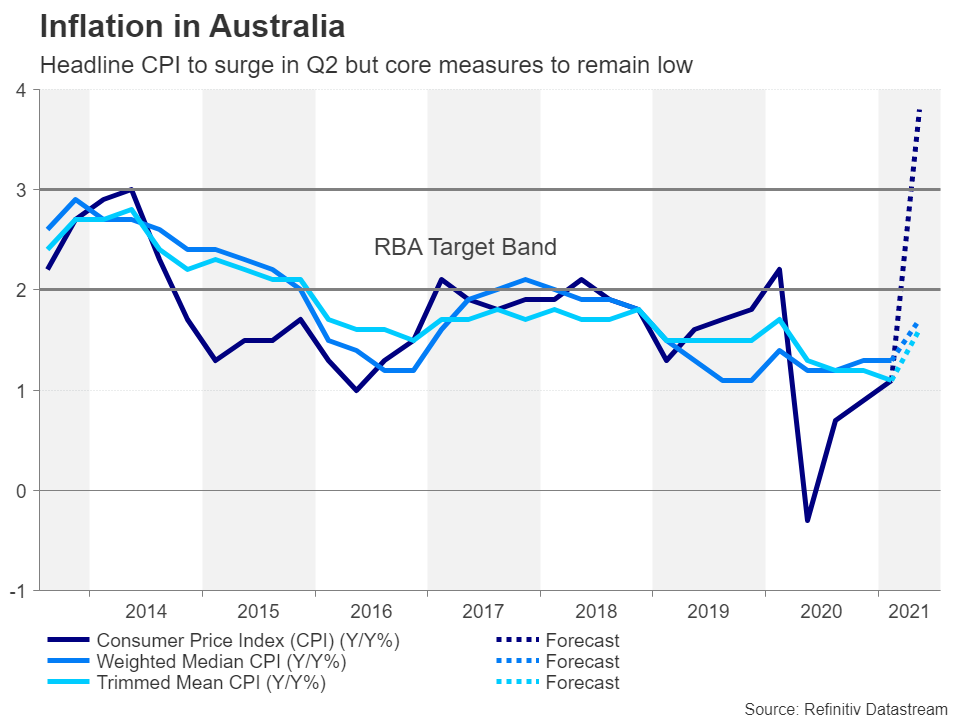 At best, stronger-than-expected CPI prints on Wednesday might defend the Australian dollar against the mighty greenback’s advances.

In Canada, the headline inflation rate has already surpassed 3% and the economic recovery is solidifying. Monthly GDP numbers on Friday should reaffirm this. However, with both the global virus trend and oil outlook worsening somewhat lately, it’s questionable whether the Bank of Canada would be swayed towards moving faster with its tapering plans even if domestic indicators, for the time being, continue to strengthen further. Hence, oil prices and risk sentiment will probably remain the Canadian dollar’s main drivers this summer.

In Britain, daily infection rates could have a hand in deciding which way the pound goes in an otherwise quiet week. There are some early signs that the latest virus wave in the UK is peaking and should there be more evidence supporting this in the coming days, sentiment for sterling could improve.

However, in the euro area, the Delta variant has only just started to become rampant in some member states while it’s started to fall in others, so it’s more difficult to get a full picture. Investors might therefore prefer to be guided by the upcoming business surveys to gauge how the economy is being impacted. Germany’s Ifo business climate index is out on Monday and the Eurozone’s economic sentiment indicator will follow on Thursday.

The week will draw to a close with the top-tier releases – the flash estimates of July inflation and Q2 GDP. The Eurozone’s harmonised index of consumer prices is expected to nudge back up to 2.0% y/y in July from 1.9% in June. That’s a pretty tamed figure compared to the 5.4% rate in the US. Underlying inflation remains even more subdued in the euro area, forecast at 0.9% y/y. 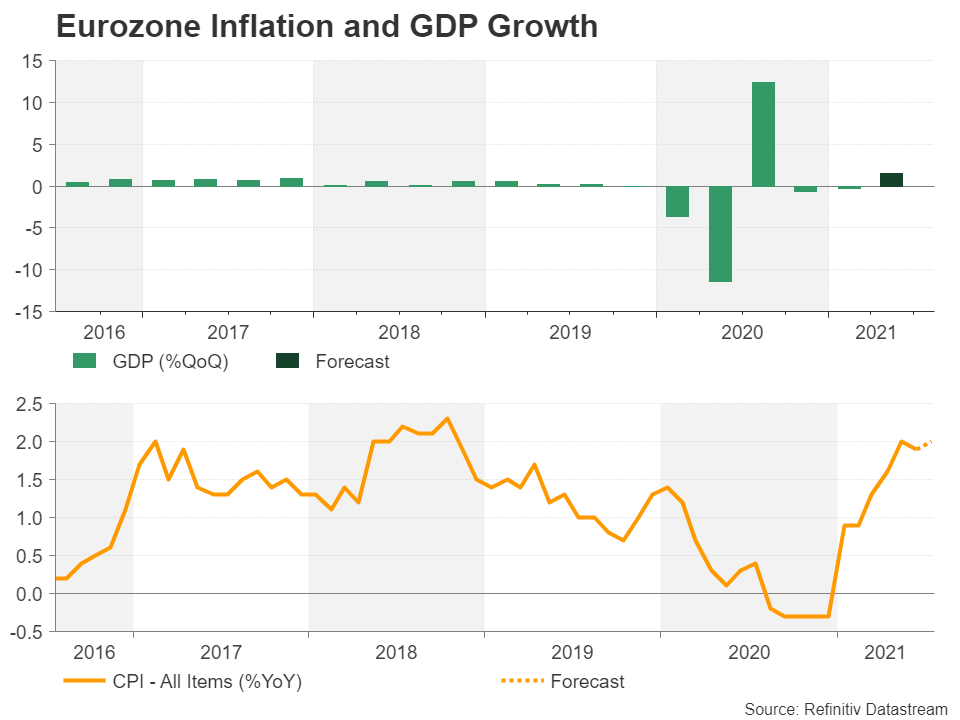 With the ECB doubling down on its pledge to lift inflation sustainably to 2%, the prospect for euro/dollar is looking a bit grim right now. There might be some cheer for the pair however, from the preliminary GDP readings for the second quarter. Eurozone growth likely bounced back by 1.5% over the quarter in Q2 after contracting by 1.3% in the previous quarter.

In the broader markets, it could be another bumpy week for risk appetite. The earnings season should keep the positive tone in equities alive as all the big tech names, including Apple, Microsoft and Alphabet, are due to report. But if virus cases continue to spiral higher, it will be harder for investors to ignore the darkening clouds ahead. Still, this would be good news for the other safe-haven currencies such as the Japanese yen and Swiss franc. The yen came off its highs in recent sessions but its medium-term uptrend against its major peers remains intact. 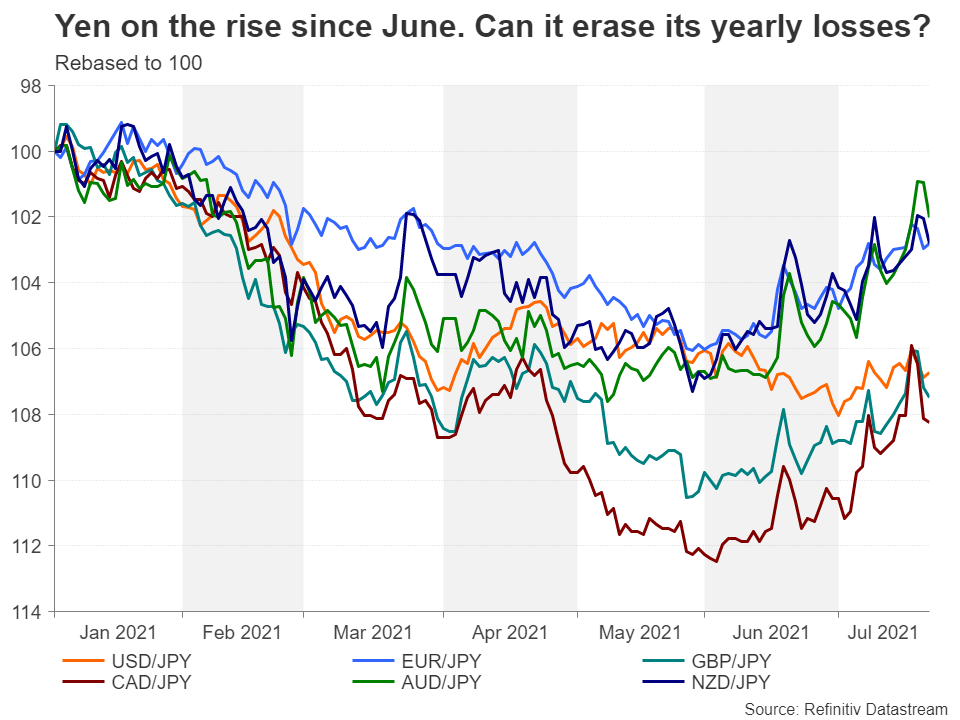 The summer Olympics will kick off this weekend in Tokyo, but the games are unlikely to deliver much economic benefit to the country as spectators have been banned due to rising infections. Retail sales data out on Friday are expected to show sales were almost flat over the year to June as virus curbs were tightened. Though, a rebound in industrial production during the same month might lessen the gloom.