The USD/JPY pair struggled to capitalize on the previous day's modest bounce from one-and-half-week lows and edged lower during the Asian session on Thursday. This marked the third day of a negative move in the previous four and was exclusively sponsored by a subdued US dollar demand. That said, a combination of factors should help limit any meaningful downside for the major, rather attract some dip-buying at lower levels.

The underlying bullish sentiment in the financial markets could dent demand for the safe-haven Japanese yen and lend some support to the pair. Bulls might further take cues from a modest pickup in the US Treasury bond yields. Apart from this, the upbeat US economic outlook should continue to underpin the USD and hold bearish traders from placing any aggressive bets or position for an extension of the recent corrective slide.

The FOMC March meeting minutes released on Wednesday revealed that policymakers remained cautious about the continuing risks stemming from the pandemic. The Fed remained committed to extending monetary policy support until the recovery was more secure. Investors, however, seem convinced that a stronger economic recovery would force the Fed to raise interest rates sooner than anticipated and pushed the US bond yields higher.

The prospects for a relatively faster US economic recovery from the pandemic remained well supported by the impressive pace of coronavirus vaccinations. This, along with US President Joe Biden's infrastructure spending plan of more than $2 trillion, has been fueling speculations about an uptick in US inflation. This, in turn, raised doubts that the Fed will retain ultra-low interest rates for a longer period. Hence, the key focus will remain on Fed Chair Jerome Powell's scheduled speech later during the US session.

In the meantime, the broader market risk sentiment, the US bond yields and the USD price dynamics will be looked upon for some trading opportunities. Later during the early North American session, the release of US Initial Weekly Jobless Claims might also provide some impetus to the major.

From a technical perspective, the previous YTD tops, around the 109.35-30 region should protect the immediate downside. This is followed by the 109.00 mark, which if broken decisively might prompt some technical selling and drag the pair to the 108.45-35 horizontal support. Failure to defend the mentioned support levels will suggest that the pair has topped out in the near term and pave the way for a further near-term depreciating move.

On the flip side, the key 110.00 psychological mark now seems to have emerged as immediate resistance. Some follow-through buying has the potential to lift the pair towards an intermediate barrier near the 110.30-40 region en-route the recent daily closing highs, around the 110.70 area. A sustained breakthrough, leading to a subsequent move beyond the 111.00 mark will set the stage for the resumption of the pair’s well-established bullish trend witnessed since the beginning of 2021. 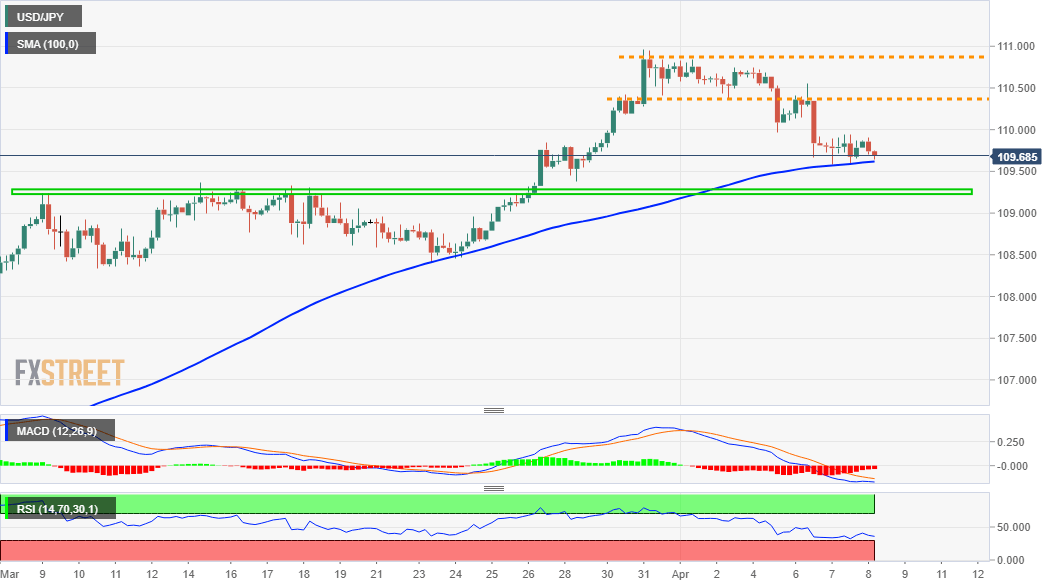