Yesterday's drop in crude oil prices ended a strong winning streak. Up until that point, Brent oil prices had risen for nine consecutive days, no less. This was the longest winning streak in more than five years. Speculators evidently rushed for the exits ahead of this week's US crude oil inventories data. The American Petroleum Institute (API) produced its findings last night, ahead of the official figures from the Energy Information Administration (EIA) this afternoon. According to the API, crude stockpiles fell by 5.8 million barrels in the week ending June 30, while gasoline stocks dropped by 5.7 million barrels. The API figures were significantly stronger than expected, causing the oil price slide to come to a halt ahead of the publication of the EIA's figures today. If the EIA confirms the API figures, or better still come in even stronger, then there is a potential for oil prices to completely reverse yesterday's drop. However, the bar raised now and the scope for disappointment is high. Thus, if the EIA data contradicts the API estimates then expect the opposite reaction in oil prices.

Generally speaking, crude oil prices are stuck in a wide range as market participants weigh the impact of supply restrictions imposed by the OPEC and Russia against rising shale oil supply, above all from the US. It is for this reason we had been producing bullish oil reports as prices slid towards the lower end of their long-term ranges towards the penultimate week of June.  Now oil prices find themselves bang in the middle of the range again. It is at these levels where price action tends to become choppy and frustrate the masses. While I am still bullish on crude oil in the long-term, due to prospects of the market tightening, in the short-term I am neutral: I get bullish when prices fall towards the lower end of the range and bearish when near the top.  At these current levels, I would lean more towards the bullish than bearish side because liquidity below some swing low points were already tested and prices failed to hold below them. Thus, oil prices may push higher over time to probe liquidity resting at higher levels. 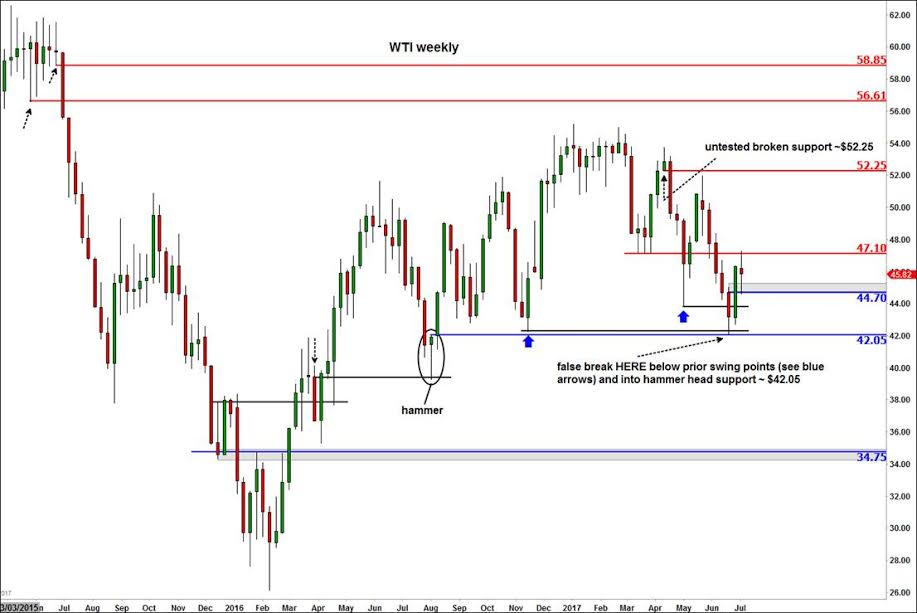