Since the start of the 2018/19 marketing season Russia, a major global grain exporter, has exported 17.7 million tons of grains as of October 18, according to Russia’s Ministry of Agriculture data. The export is up 21 percent compared with the same period of the last season. The wheat export is up 34.3% to 15.2 million tons. And Russian agricultural consultancy IKAR upgraded Russia’s wheat export forecast to 33.0 million tons from 32.5 million on back of bigger wheat harvest, a 1.5% increase. At the same time Ukraine looks set to harvest its second-largest grain crop ever this year, with total production of around 64 million metric tons. Ukraine’s Ministry of Agrarian Policy and Food estimates it could export approximately two-thirds of that total by the end of next June. Forecasts of increasing wheat production are bearish for wheat prices. 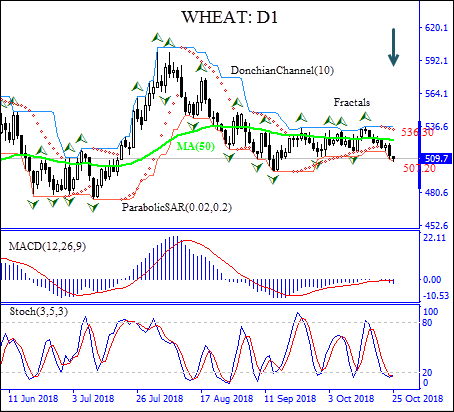 On the daily timeframe the WHEAT: D1 is below the 50-day moving average MA(50) which is falling, this is bearish.

We believe the bearish momentum will continue after the price breaches below the lower boundary of Donchian channel at 507.20 This level can be used as an entry point for placing a pending order to sell. The stop loss can be placed above the upper Donchian boundary at 536.30. After placing the order, the stop loss is to be moved every day to the next fractal high, following Parabolic signals. Thus, we are changing the probable profit/loss ratio to the breakeven point. If the price meets the stop loss level (536.30) without reaching the order (507.20), we recommend cancelling the order: the market has undergone internal changes which were not taken into account.

EUR/USD is trading above 1.10, recapturing the level as the dollar retreats. After a three-day rally, stocks are cooling but the safe-haven dollar is still under pressure. Coronavirus headlines are eyed.

GBP/USD is trading above 1.23, some 900 pips off the lows amid dollar weakness. UK coronavirus cases are rising at a growing pace and Brexit talks have been put on ice.

Cryptocurrencies: Bulls honing their antlers for an upward attempt ahead

The sense of extreme fear is divergent with the levels of the mathematical averages. Bitcoin dominance ratio moves at a structural pivot level and can lead to a trend change. XRP is the winner of the day, but far away from fleeing out of the bearish scenario.

Gold edged lower through the early European session and is currently placed near the lower end of its daily trading range, just below $1620 level. Concerns over an imminent global recession might help limit losses.

US Jobless Claims Analysis: 3 M is only the beginning, 3 reasons why USD may rise

Unemployment is engulfing the US – weekly jobless claims jumped to 3.283 million, an increase of 1,053%. The four-week moving average is near one million, also surpassing the worst since the Great Financial Crisis.