To misquote Lenin, there are years where nothing happens and weeks where years happen – we’re in one of those weeks now. Global bond yields are surging, wreaking havoc across portfolios and across asset classes.

The UK has been the focus – the steep sell-off in gilts in the wake of the mini-Budget well documented by now. After some respite early doors on Tuesday the selling continued yesterday as gilts yields rose again to fresh multi-years highs across all tenors. The 30yr gilt yield jumped above 5% for the first time since 2002. The 10yr rose above 4.5%, and is ticking up now, whilst the 2yr has nudged close to 4.7%.

The IMF weighed into the situation in the UK, castigating the government for, in the words of Ray Dalio, its fiscal policy ‘blunder’. “Given elevated inflation pressures in many countries, including the UK, we do not recommend large and untargeted fiscal packages at this juncture,” the IMF said in a pointed rebuke to the Chancellor. “It is important that fiscal policy does not work at cross purposes to monetary policy.” The UK and IMF have history. And it’s curious how silent the IMF was during the pandemic when all the unfunded spending by the previous chancellor was being dished out to all and sundry. Remember this situation was made in 2020.

Now you can argue that monetary and fiscal policy should not be at odds, but the thinking might be that whilst the Bank of England tackles the ‘flation bit, the government can tackle the stag’ bit. I think the point we’ve been trying to make against the reckless Budget is two-fold: whilst they don’t need to be doing exactly the same thing, they shouldn’t pulling in entirely different directions. One of the reasons for the explosion in gilts is the sovereign premium – markets holding their noses at unfunded, untargeted tax cuts - the other is just simply that the market thinks the Budget is going to force the Bank into much more tightening than it had planned, because the fiscal bit is likely to push the ‘flation bit too far. More tightening hits households and makes companies less competitive as they try to raise funds for growth – countering the tax cuts. Better to wait to control the inflation before doing the dash for growth. Not least because if the Bank does need to go to 6% then you have a nightmare in the mortgage market as people won’t be able to refinance deals and first time buyers get locked out (all else equal prices will come down, but I think you just end up with a stagnant market with no sellers) countering any economic or political advantage you might have enjoyed otherwise. As ever, it’s a fine balancing act and it’s clear the government misjudged its footing.

Bank of England chief economist Huw Pill underlined the point. "We have all seen recent, significant fiscal news in the past few days …that has had significant market consequences – as well as significant implications for the macro-outlook – including, but not exclusively, those coming by asset markets.”

He concluded: "On the back of all that... I think it's hard not to draw the conclusion that all this will require a significant monetary policy response." Pill also said the Bank wouldn’t stop gilt sales, which seemed to add to the pressure in the UK bond market.

GS: "We now expect the BoE to deliver a 100bp hike in each Nov and Dec (vs 75bp before)...While a big intra-meeting rate hike is possible...we believe that hawkish BoE commentary and a large move at the Nov meeting is more likely".

It’s not confined to the UK by any means, though the moves here have been much swifter and larger since Friday. Some decent eco data and consumer confidence numbers, plus a slew of comments from various Fed speakers, hit the US Treasury market and yields surged to fresh multi-year highs. Back to this good news is bad news for the market since it only provides ongoing cover for the Fed to keep on hiking until it all breaks. The 10yr Treasury yield rose above 4%.

Stocks have slumped early Wednesday amid the bond carnage. The FTSE 100 declined as much as 2% before paring losses a touch with just about every stock in the red, whilst the FTSE declined also by 2%. Rate hike worries are the chief driver of the losses and it’s hard to see where you are supposed to hide – cash if you can get 4-5% on a 2yr gilt? I think a lot of people are clinging to equities because there just isn’t much else on offer, but they don’t want to be there.

The DAX slid over 1.6% to below 12,000 after the German GfK consumer climate index fell to –42.5 in October, a huge fall from the –36.8% in September and another record low. ECB chief Lagarde said they’ll keep hiking in the coming meetings. Asian markets were lower with the Hang Seng off by more than three percent – more property market worries.

DAX cracked at YTD lows and now below the 50% retracement of its move up from the pandemic low. 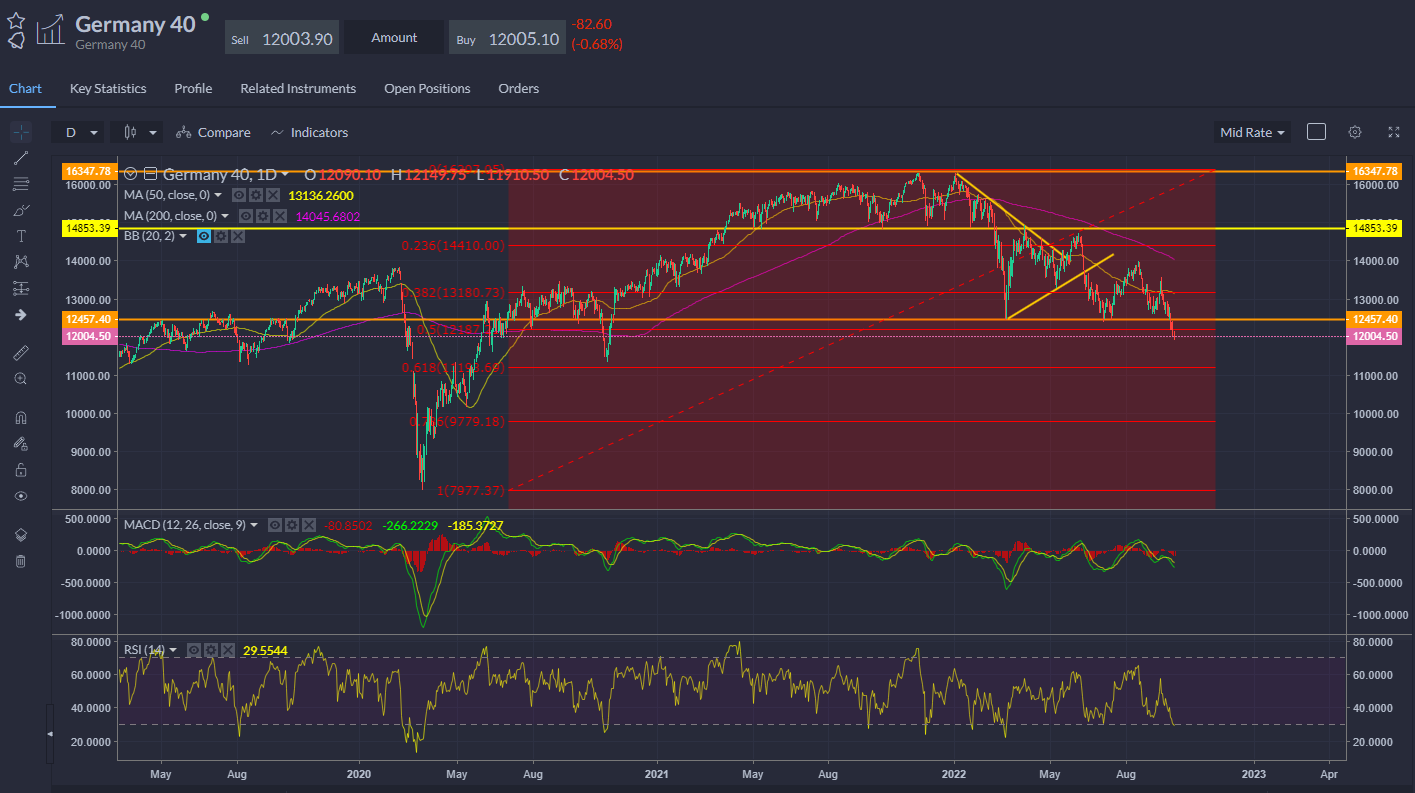 Rising rates hit the US market as the S&P 500 made a fresh 2022 low and the Dow fell further into a bear market. The Nasdaq composite managed to eke out a 0.25% rise for the day, but remains down 33% from its highs whilst the S&P 500 is 24% below its peak. US markets are now facing technical breakdowns at some very key levels, with the S&P 500 at a YTD low and testing its 200-week moving average. Apple is down after ditching its planned iPhone boost due to lack of demand – about 7% of the market. 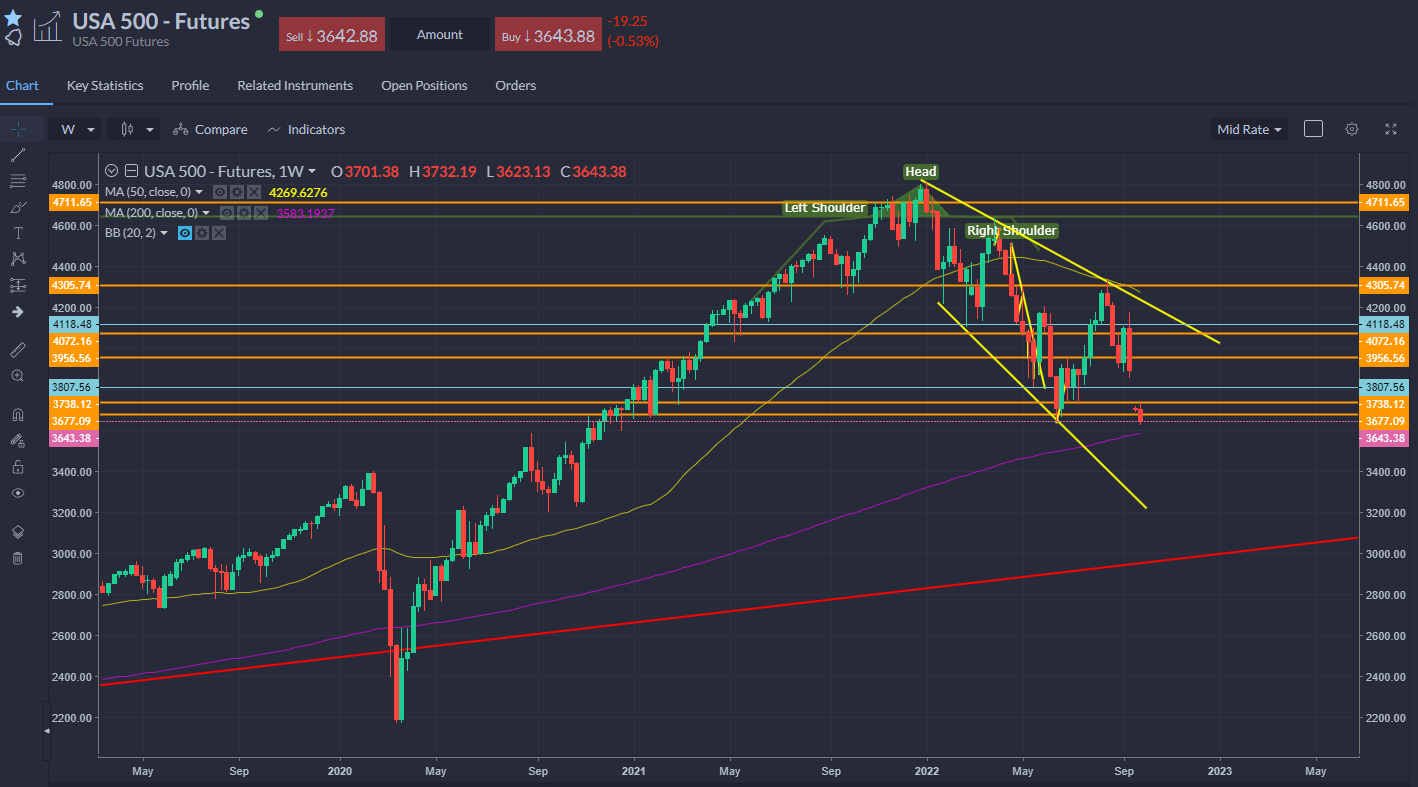 Vix keeps motoring out of the pattern – we are now setting up for the capitulation, but stocks likely need to make another leg lower. Earnings season approaches – will it be the final pillar holding up equities to tumble?

Brent futures are weaker in early trading, just a touch above the Monday low. Goldman on how it got its $140 target wrong: “What we failed to appreciate is the extent to which regional prices for commodities denominated in local currencies could diverge on a global basis.” Meanwhile reports yesterday pointed to Russia calling on OPEC+ to cut production by as much as 1m bpd. 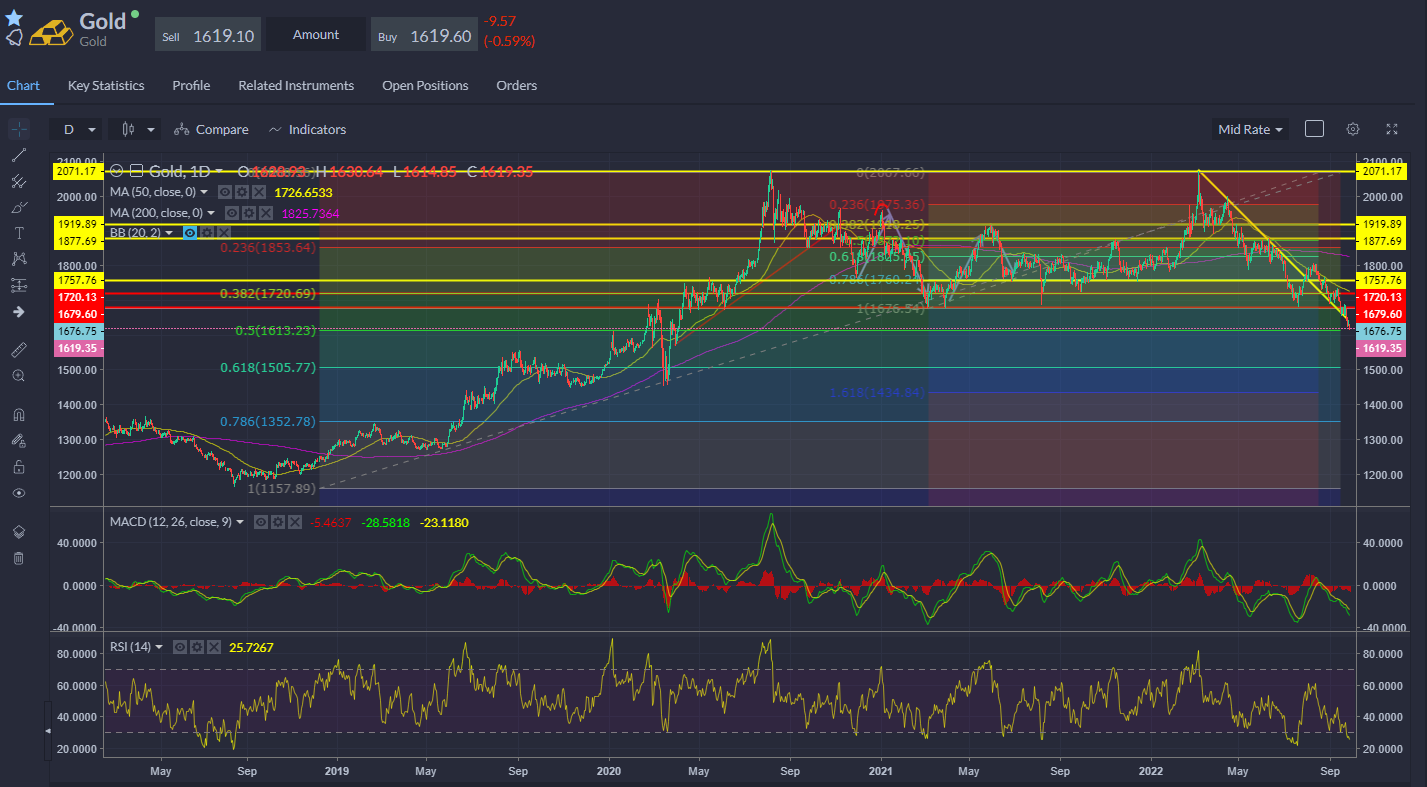