For 35 years until 1989 Paraguay was governed by the dictator Stroessener. Constitutionalism was restored in 1992. Paraguay has two official languages, Spanish and Guarani, and the latter is spoken by 60% of the population - the highest indigenous participation on the Continent. Under Stroessener the Paraguayean economy grew steadily under the import substitution model and the development of infrastructure for hydroelectric dams.

It can be seen from the chart below that for the period up to the 1992 Constitution economic growth averaged about 7% a year. There was a contraction around 1982/83 coinciding with the Latin American debt crisis but growth quickly resumed. In fact, although Paraguay, like it’s neighbours, borrowed internationally after 1974 it invested the loans in infrastructure and particularly dams for electricity generation for export. Thus it was comfortably able to meet it’s repayments and didn’t have recourse to the IMF. 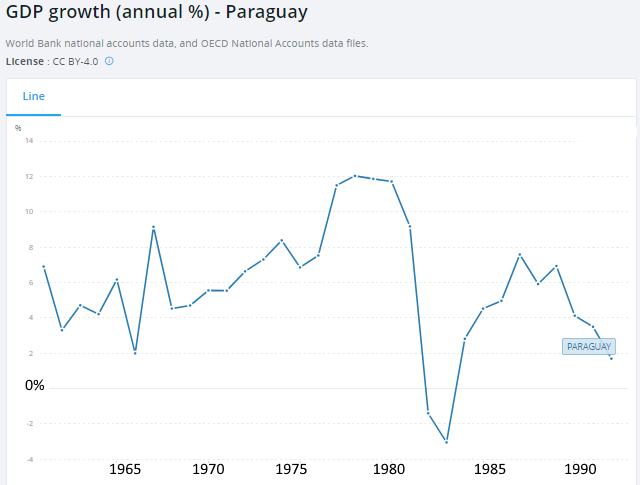 For the period since the return of Constitutionalism it can be seen from the chart below that growth has averaged about 5% a year. There was a dip at the turn of the Millennium coinciding with contractions in both Brazil and Argentina and there was also a minor dip coinciding with the world financial crisis around 2010. Thus it can be said that Paraguay has been one of the most consistent growth countries in Latin America over many decades. It also has low inflation and a negligible Government deficit. Some 45% of the working age population are in insured employment. 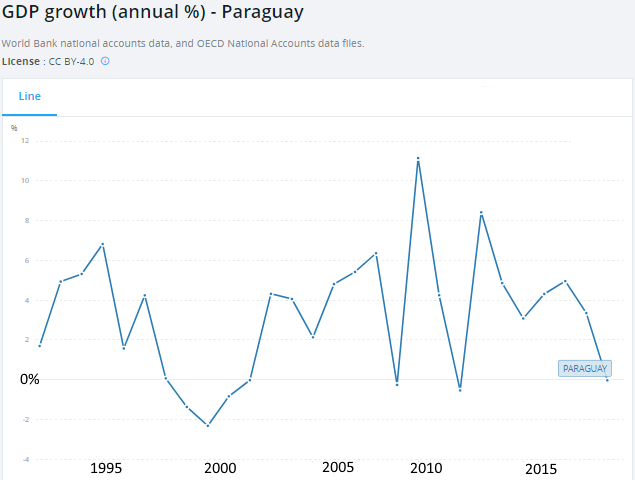 Apart from electricity it exports are mostly primary produce and it’s three largest export markets are Brazil, Argentina and Chile. That means it will be affected by the recent slowdowns in Brazil and Argentina in particular. For economic growth to continue Paraguay must diversify it’s exports by type and destination by looking for new markets in Asia, Europe and beyond.