NZD/USD in quiet trading ahead of US CPI inflation

NZDUSD has been silent since Monday’s negligible pickup, which put the market in the green territory on a weekly basis, trading flat at 0.6280 ahead of the US CPI inflation early on Wednesday.

The pair is currently trying to build a floor around the 50-day simple moving average (SMA) at 0.6274 following the bounce on the 20-day SMA and the lower boundary of the short-term bullish channel on Monday, but the technical oscillators are barely promoting any meaningful rebound at the moment. In particular, the RSI has been diminishing towards its 50 neutral mark, while the MACD has been muted near its zero and signal lines, both mirroring a neutral short-term bias instead.

Perhaps, a close above the 50% Fibonacci retracement of the latest down leg at 0.6317 could provoke the much-needed bullish power. If that proves to be the case, the price could fly towards the channel’s upper limit, which currently coincides with the 61.8% Fibonacci of 0.6410. Not far above, the 78.6% Fibonacci of 0.6464 and the 0.6500 psychological mark could next come into consideration ahead of the 0.6574 high.

In brief, although NZDUSD is currently declaring a neutral status, upside movements remain possible as long as the 0.6256 area provides a foundation. 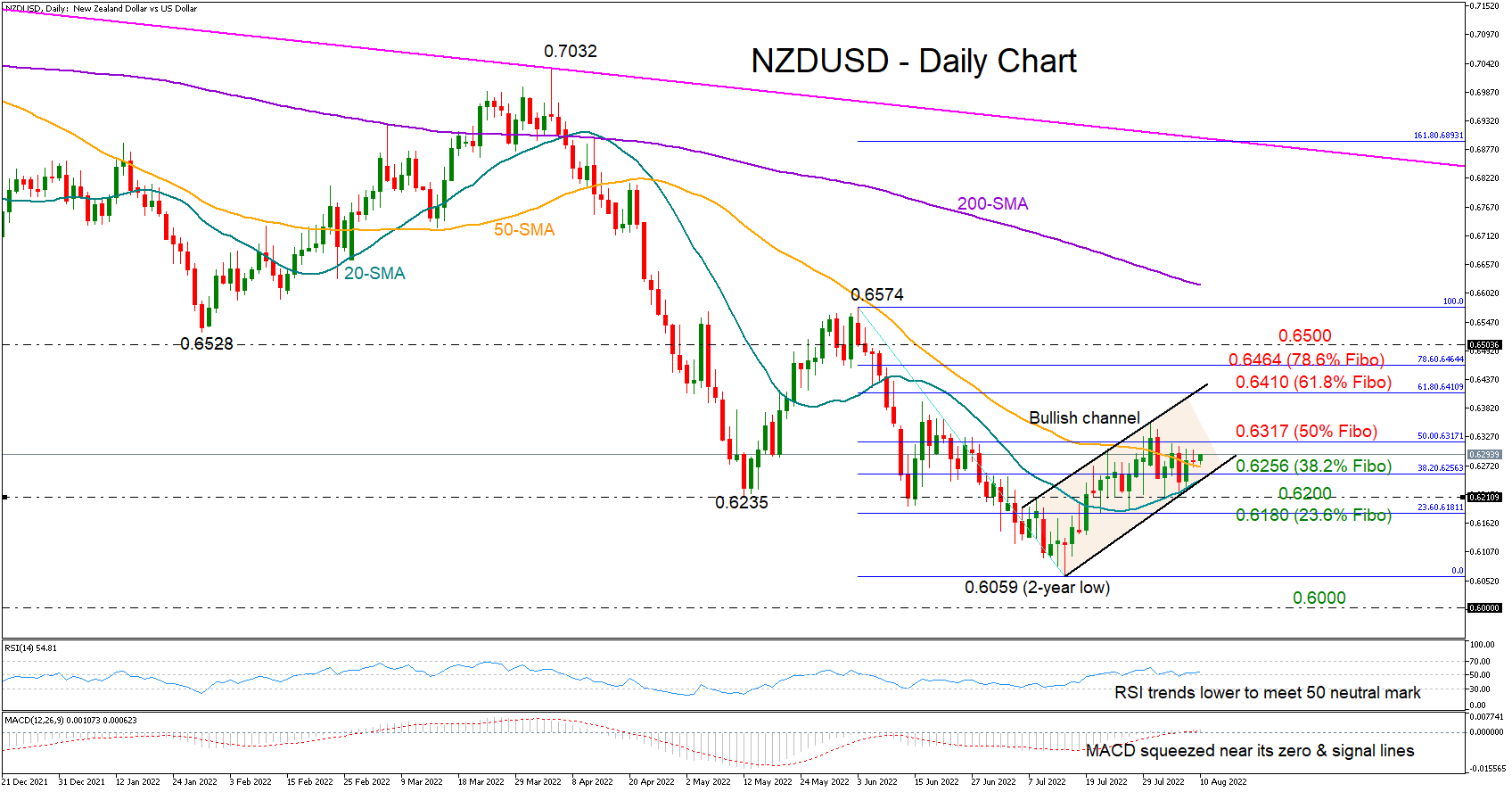 USDJPY has been gaining some ground in the short-term after its latest decline came to a halt at the 130.40 region. However, the recent price recovery has been repeatedly held down by the ascending 50-day simple moving average (SMA).

The momentum indicators suggest that near-term risks are tilted to the upside. Specifically, the stochastic oscillator is flatlining in its 80-overbought area, while the MACD histogram has jumped above its red signal line but remains in negative territory.

Should positive momentum strengthen and the price crosses above its 50-day SMA, initial resistance could be met at the recent peak of 135.57. Conquering this barricade, the bulls could then aim for the 137.55 barrier. An upside violation of the latter could set the stage for the 24-year high of 139.37.

Alternatively, if selling pressures arise, the pair could descend to challenge the 132.50 hurdle. Sliding beneath that floor, the recent low of 130.40 might be the next support zone for the price. Any further declines may then stall at the May low of 126.40 before the spotlight turns to 121.20.

Overall, USDJPY’s short-term picture appears to be constantly improving but the 50-day SMA has proved to be a tough resistance barrier for the bulls. Nevertheless, a drop beneath the 130.40 floor could shift the technical picture back to negative.