Following a two-day marathon in which "Spitzenkandidat" Failed and Merkel's Plan A and Plan B Dumped Lagarde will now head the ECB and give up her job at the IMF.

It's rare to find someone who is consistently wrong on everything. Christine Lagarde, whom the EU just anointed as the president of the ECB, comes close.

Subzero interest rates in Europe and Japan are “net positives” for the global economy, International Monetary Fund chief Christine Lagarde said Tuesday, though she warned that the side effects of unorthodox central-bank policies should be closely monitored.

“We see the recent introduction of negative interest rates by the ECB and Bank of Japan —though not without side effects that warrant vigilance—as net positives in current circumstances,” Ms. Lagarde said. 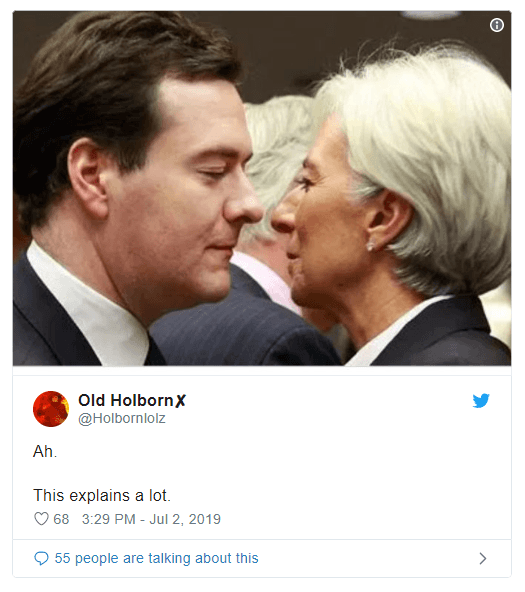 "Net Positive" Nonsense by the Numbers

If negative interest rates did any good, why are Europe and Japan in such miserable shape?

This third bubble is the biggest of all but they do not see it.

Meanwhile, there is no impetus for change anywhere, except in the wrong direction!

The appointment of Lagarde is icing on the "If it doesn't work, we will keep doing it, until it does" cake.

The ECB is running out of sovereign bonds to buy, by current rules.

Lagarde will also face a test regarding budget deficits and debt in Italy and the deficit in her own country, France.

How many rules will Lagarde break?

EUR/USD struggles around 1.2050 amid dollar strength, ahead of US PMI

EUR/USD is pressured around 1.2050 as returns on US debt advance, supporting the dollar. German states have reported mixed CPI reads for February. The US ISM Manufacturing PMI and the ECB's weekly bond purchases are awaited.

GBP/USD retreats from 1.40 as US yields resume their rise

GBP/USD is trading around 1.3950 but off the highs. US bond yields have resumed their gains, boosting the dollar. The US ISM Manufacturing PMI and stimulus news are awaited. Markit's final UK Manufacturing PMI for February was revised up to 55.1 points.

Dogecoin on the verge of a 50% breakout

DOGE price is consolidating in a descending triangle pattern, hinting at a 50% breakout soon. It has slid below the support provided by the 50, 100, and 200 four-hour moving averages indicating a lack of buyers.

Gold gained some positive traction on Monday, albeit lacked any follow-through buying. The set-up favours bearish traders and supports prospects for a further depreciating move. A sustained move beyond the $1772-73 region might prompt some short-covering bounce.

DXY adds to the recent uptick and regain the key barrier at 9100 the figure at the beginning of the week.