Housing starts inched down 0.2% in April to a 1.724-million unit annualized pace. The percentage drop would have been larger had it not been for a substantial downward revision to March's print. Single-family starts came in weaker than expected, falling 7.3% in April. Multifamily starts, on the other hand, surged 15.3% over the month, although much of this can be attributed to a downward revision to March's figure. Total starts for February were also revised lower, indicating a softer start to the year than initially reported. Permits weakened on all fronts with total permits falling 3.2% to a 1.819-million unit pace. Single-family and multifamily permits fell 4.6% and 1.0%, respectively. Echoing the soft housing starts report and rapidly rising mortgage rates, the National Association of Home Builders/Wells Fargo Housing Market Index fell by 8 points to 69, its lowest level since April 2020. Souring builder sentiment was reflected in a softer outlook for present and future sales measures as well as prospective buyer traffic.

Following strong activity to start the year, housing starts have stumbled as of late as surging mortgage rates have extinguished some demand in the market. Total housing starts beat expectations of a 2.1% decline in April, slipping just 0.2% to a 1.724-million unit annualized pace. However, March's initially reported performance–which showed overall starts activity running at the best pace since Q2-2006–was downwardly revised to a 1.728-million unit pace.

Last month's weakness was entirely attributable to the single-family market, which saw starts drop a sizable 7.3%. This marks the second straight decline in single-family starts, and with forward-looking permits also falling for the second month in a row, suggests further moderation in single-family activity in coming months. Weakness was broad-based with declines reported in every region except for a small gain in the West.

As our top chart shows, the number of overall housing units authorized but not started and for sale but not yet started continue to climb higher. Single-family authorizations, which are considered a measure of backlogs in the market, increased 0.7% to the highest level in over 15 years. Even with growing backlogs, builders are having little trouble finding buyers as an increasing number of homes that have not started construction are going on the market. 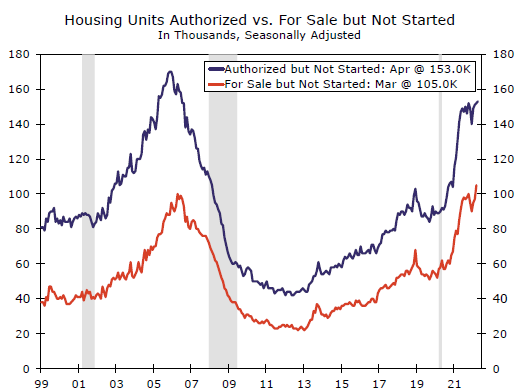 Multifamily permits ticked down 1.0% in April following a slight downward revision to March's numbers. Permits continue to outpace starts by a wide margin in 2022, with permits averaging a 680,500-unit pace for the first four months of the year, about 21.6% higher than the pace of starts.

The number of multifamily starts surged 15.3% to reach a 624,000-unit pace, a massive jump from March's 541,000-unit annualized pace. Completions fell 5.8% in April to a 294,000-unit pace. The slow rate of completions has become typical for multifamily projects as mid-rise and high-rise projects make up a larger share of projects than 2-4-unit projects. 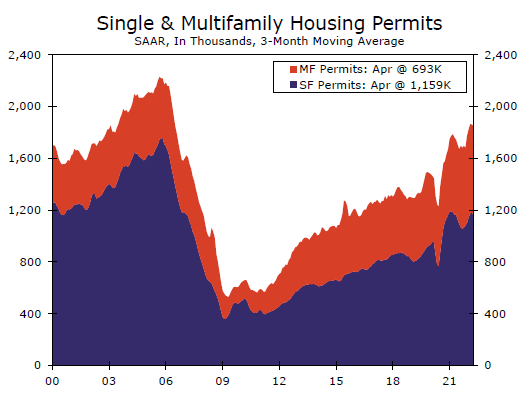