Gold has been trading sideways recently, but this won’t last forever – the yellow metal is likely to move downward before continuing its rise.

So, so you think you can tell heaven from hell, a bull market from a bear market? It’s not so easy, as gold seems to be at a crossroads. On the one hand, accelerating inflation should take gold higher, especially that the real interest rates stay well below zero. On the other hand, a hawkish Fed should send the yellow metal lower, as it would boost the expectations of higher bond yields. The Fed’s tightening cycle increases the interest rates and strengthens the US dollar, creating downward pressure on gold.

However, gold is neither soaring nor plunging. Instead, it seems to be in a sideways trend. Indeed, as the chart below shows, gold has been moving in a trading zone of $1,700-$1,900 since September 2020. 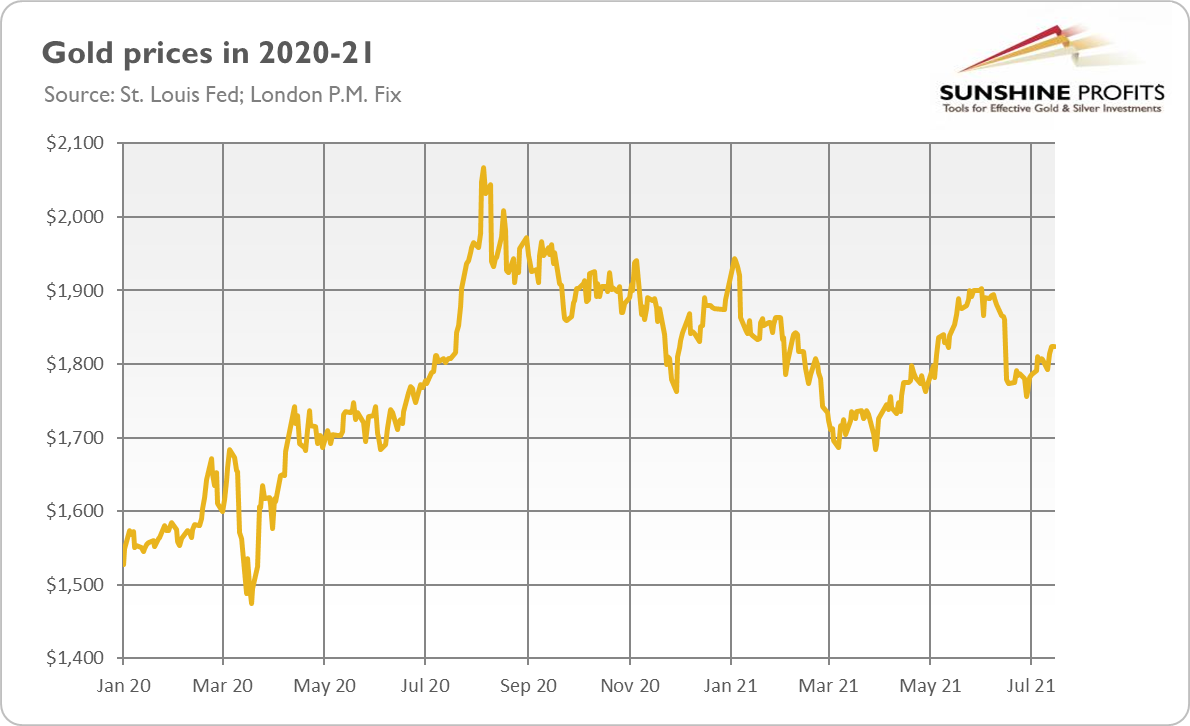 Now, the obvious question is: what’s next? Are we observing a bearish correction within the bull market that started in late 2018? Or did the pandemic and the following economic crisis interrupt the bear market that begun in 2011? Could a new one have started in August 2020? Or maybe gold has returned to its sideways trend from 2017-2018, with the trading corridor simply situated higher?

Oh boy, if I had the answers to all the wise questions that I’m asking! You see, the problem is that the coronavirus crisis was a very special recession – it was very deep but also very short. So, all the golden trends and cycles have intensified and shortened. What used to be years before the epidemic, took months this time. Welcome to a condensed gold market!

Hence, I would say that the peak of July 2021 marked the end of the bull market which started at the end of 2018, and triggered a new bear market, as traders decided that the vaccines would save the economy and the worst was behind the globe. This is, of course, bad news for all investors with long positions.

I didn’t call the bear market earlier, as the combination of higher inflation and a dovish Fed was a strong bullish argument. However, the June FOMC meeting and its dot-plot marked a turning point for the US monetary policy. The Fed officials started talking about tapering, divorcing from its extraordinary pandemic stance.

So, I’ve become more bearish in the short-to-medium term than I was previously. After all, gold doesn’t like the expectations of tapering quantitative easing and rising federal funds rate. The taper tantrum of 2013 made gold plunge.

Nonetheless, the exact replay of the taper tantrum is not likely. The Fed is much more cautious, with a stronger dovish bias and better communication with the markets. The quantitative tightening will be more gradual and better announced. So, gold may not slide as abruptly as in 2013.

Another reason for not being a radical pessimist is the prospects of higher inflation. After all, inflation is a monetary phenomenon that occurs when too much money is chasing too few goods – and the recent rate of growth of the broad money supply was much higher than the pace needed to reach the Fed’s 2% target. The inflationary worries should provide some support for gold prices. What gold desperately needs here is inflation psychology. So far, we have high inflation, but markets remain calm. However, when higher inflation expectations set in, gold may shine thanks to the abovementioned worries about inflation’s impact on the economy – and, thanks to stronger demand for inflation hedges.

In other words, gold is not plunging because the Fed is not hawkish enough, and it’s not rallying because inflation is not disruptive enough. Now, the key point is that it’s more likely that we will see a more hawkish Fed (and rising interest rates) sooner than stagflation. As the chart below shows, the real interest rates haven’t yet started to normalize. When they do, gold will suffer (although it might not be hit as severely as in April 2013). 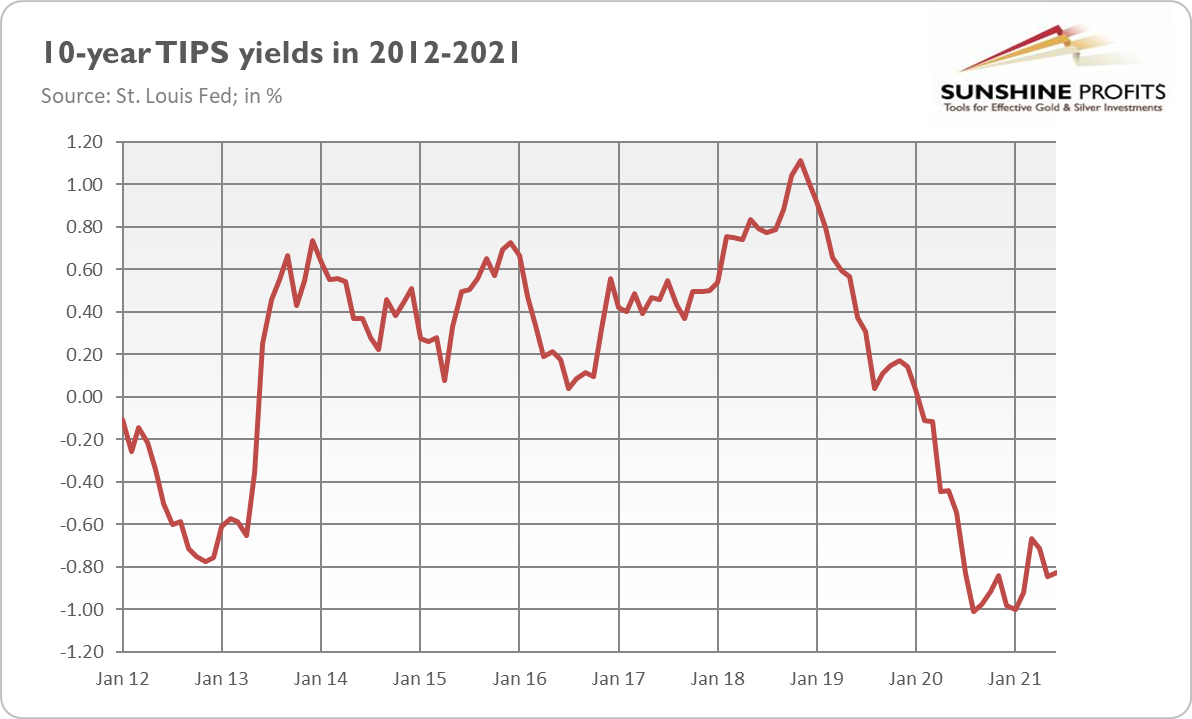 Therefore, gold may decline shortly when the US central bank tapers its asset purchases (and the bond yields increase) while the first bout of inflation softens. But later, gold may rise due to the negative effects of rising interest rates and the second wave of higher inflation.

In other words, right now, the real economy is thriving, so inflation is not seen as a major problem, as it is accompanied by fast GDP growth. However, the economy will slow down at some point in the future (partially because of higher inflation) – and then we will be moving towards stagflation, gold’s favorite macroeconomic environment.