Has the gamble paid off? Less than a week after "Freedom Day" Britain has recorded the fifth consecutive day of falling COVID-19 cases. Experts have warned that the results of the UK's grand reopening on July 26 are still reflected in virus statistics – two or three weeks are needed – but the downtrend is encouraging.

Just under 30,000 new infections were reported on Sunday, a substantial fall from nearly 50,000 on the same in the previous week. 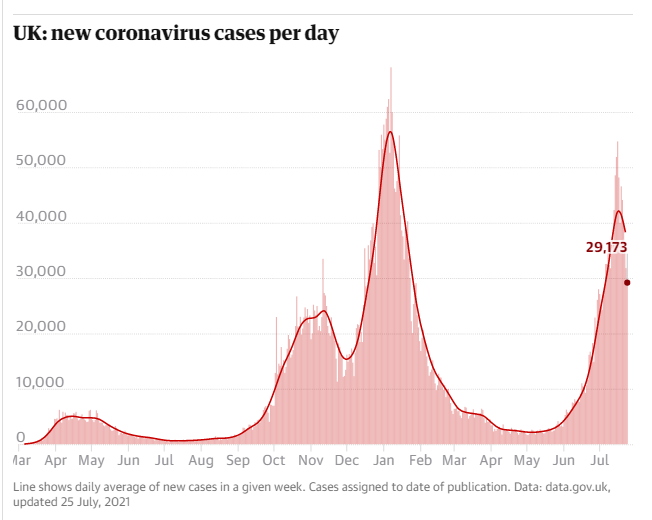 Hospitalizations and deaths have extended their uptrend – albeit at a slower rate than in previous waves – and have yet to turn down. Moreover, hundreds of thousands of Brits are "pinged" by the system and asked to self-isolate after coming in contact with somebody that tested positive.

The government is attempting to alleviate any staff shortages – which could potentially result in empty shelves in supermarkets – by guiding those that are pinged but fully vaccinated and asymptomatic to continue working. That would also alleviate economic pressures.

While health experts want to see persistently falling covid numbers, markets may move forward already now and may get another boost when Britain releases fresh statistics later in the day. Any drop in cases could result in an uptick in sterling.

On the other side of the pond, fewer people are vaccinated – only 56% received one shot in the US vs. nearly 70% in the UK – and infections are rising. Dr. Anthony Fauci, the White House's scientific advisor, said that the country is going in the wrong direction. Such worries boost the safe-haven dollar.

Last week, markets plunged on coronavirus concerns but recovered rapidly. GBP/USD's plunge to the lowest since February was gradually reversed. This week, the pound seems to have a better footing.

Apart from the virus, investors are gearing up toward Wednesday's all-important Federal Reserve decision. On the one hand, worries about the virus could keep the bank on hold from hinting at any withdrawal of monetary stimulus. On the other hand, inflation is rising in the US.

Fed Chair Jerome Powell is expected to lay the groundwork for announcing tapering of its bond-buying scheme in December. Any pre-announcement now – or lack thereof – could trigger high volatility.

Pound/dollar is benefiting from upside momentum on the four-hour chart and has topped the 50 Simple Moving Average, both bullish signs.