The US Dollar Index (DXY), which tracks the greenback’s performance against a basket of six major currencies, surged above 106.00 and reached its highest level in nearly two decades on Tuesday. The widening policy divergence between the US Federal Reserve and other major central banks, especially the European Central Bank, continues to boost the dollar. Additionally, the currency capitalizes on safe-haven flows with investors growing increasingly worried about a global recession.

The US Federal Reserve will release the minutes of its June meeting, at which it decided to hike the policy rate by 75 basis points (bps), on Wednesday, July 6.

The CME Group FedWatch Tool shows that markets are pricing in a 93% probability of another 75 bps rate increase in July. Hence, it would be surprising to see a market reaction in case the Fed’s publication confirms such a policy move later in the month. Cleveland Fed President Loretta Mester, San Francisco Fed President Mary Daly and Fed Governor Michelle Bowman are among Fed officials who openly said that they would support a 75 bps rate hike in July. 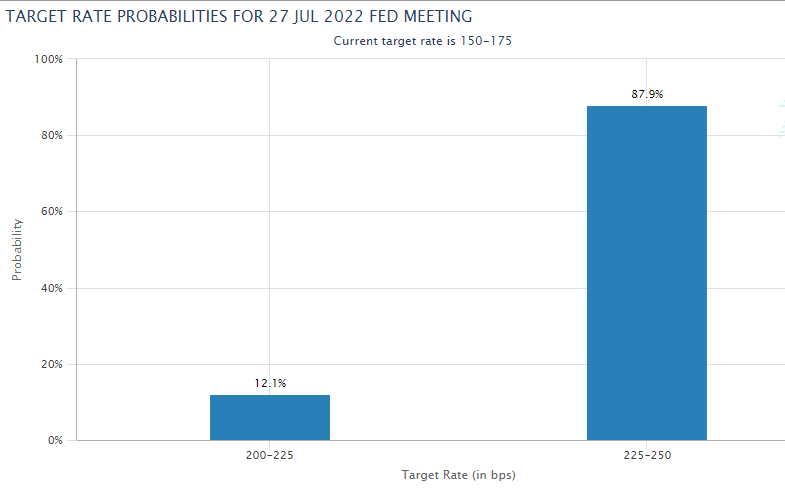 Currently, there is a more-than-80% chance of a 50 bps rate hike in September. This market positioning suggests that there is room for a hawkish surprise in case the minutes reveal that policymakers are willing to consider one more 75 bps hike in September if they don’t see any signs of inflationary pressures easing until then. In that scenario, the benchmark 10-year US Treasury bond yield, which fell by nearly 10% in the last two weeks, could regain traction and help the dollar preserve its strength. 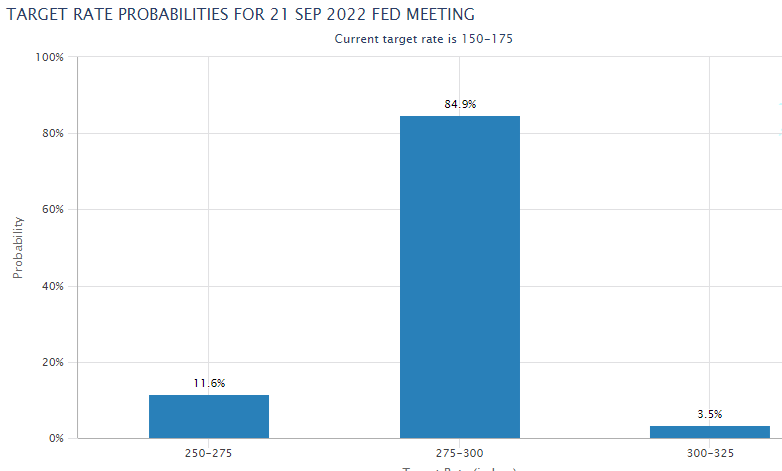 The Fed’s Summary of Economic Projections, the so-called dot plot, showed the median view amongst policymakers is that interest rates will end 2022 at 3.4%, well up from 1.9% in March’s dot plot. Currently, the federal funds rate is 1.5%-1.75%, leaving room for a total of 175 bps hikes in the last four meetings of the year. Two more 75 bps rate hikes in July and September could open the door for the policy rate to come closer to 4% toward the end of the year unless the Fed unexpectedly decides to pause rate increases.

If the minutes unveil that policymakers refrain from committing to a specific size of a rate hike after July and want to see how the economy and the inflation outlook develops, this could be seen as a dovish tone and trigger a dollar selloff. It’s worth noting that the latest PMI surveys from the US displayed that the business activity in the private sector lost significant growth momentum in June. Market participants could start pricing in a less aggressive tightening stance in the last quarter of the year if they see that policymakers are worried about tipping the economy into recession.

Investors are trying to figure out whether or not the Fed will continue to sacrifice growth to battle inflation. Since a 75 bps rate hike in July is nearly fully priced in, the minutes of the June policy meeting will be looked upon for fresh clues regarding the policy stance in the fourth quarter. Unless investors are convinced that another 75 bps hike in September is more likely than not, the DXY could find it difficult to push higher and make a downward correction. Nevertheless, with the greenback holding its status as a safe haven, a Fed-inspired dollar selloff should remain short-lived.