One of the standout FX moves in quiet summer markets has been EUR/CHF dropping to new lows for the year. The narrative is that ECB policy is sinking the EUR, while the normally interventionist SNB may have its hands tied. Yes, CHF is strong on a nominal basis, but Switzerland's low inflation means that the real CHF may still be 4% below the 2015 highs.

After trading as high as 1.1150 in March, the rest of the year has been a disappointment for EUR/CHF – drifting lower and then through July and August selling off with a little more momentum.

The acceleration through July looks a function of the speculation and then delivery of new, dovish policy from the European Central Bank. We can see that below in the sharp fall in real EUR rates through July – where the market effectively buys into:

The continuing expansion of the ECB’s balance sheet is also at odds with developments in Switzerland. Remember that the Swiss National Bank's monetary policy consists of keeping the policy rate very negative (at -0.75%) and also FX intervention. There is not a sufficient stock of domestic assets for the SNB to conduct QE.

Reduced FX intervention, therefore, means reduced balance sheet expansion for the SNB. As our chart below shows, the very modest SNB intervention in 1Q21 (just CHF296mn) and perhaps around CHF10bn in 2Q21, if sight deposit data is any guide, means that the ECB’s balance sheet is increasing far more quickly than that of the SNB. It will also serve as a reminder that the SNB abandoned its 1.20 floor in January 2015 when it saw the onslaught of forthcoming ECB QE that year.

How concerned is the SNB?

The SNB normally shows its concern over Swiss franc strength by both its description of the currency’s value and its determination to intervene. An upgrade to the SNB’s concern could be demonstrated in the Sep 23rd policy meeting of the CHF being ‘even more highly valued’, while also inserting a ‘more strongly’ on its willingness to intervene in FX markets.

Yet the alarm bells in Zurich may not be as loud as the EUR/CHF spot rate might suggest. As we show below, the SNB’s nominal and real trade-weighted indices for the CHF show a different picture. Yes, the nominal CHF remains near its highs, but because of Switzerland’s perennial low inflation, the real CHF index is probably still some 4% off the highs seen in 2015 – after the SNB had abandoned the floor. Could that suggest SNB has tolerance for EUR/CHF trading to 1.03 before aggressively increasing FX intervention? 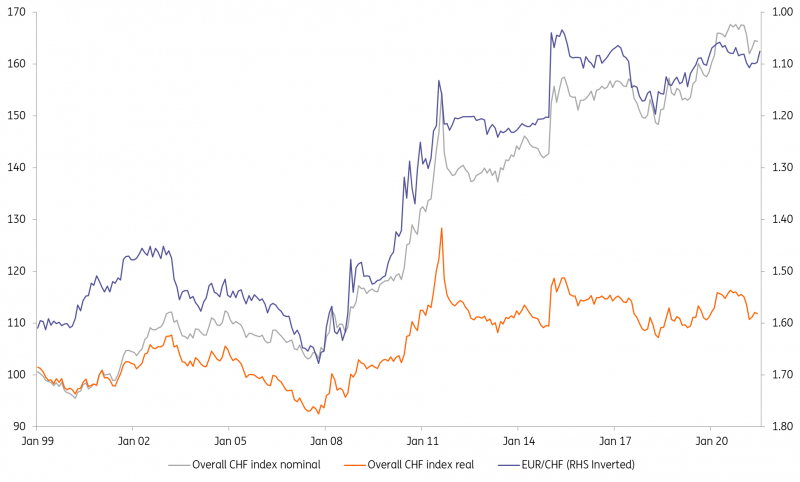 Less intervention. Are the SNB’s hands tied by Washington? Trade relationships between Switzerland and the US have been a silent underlying theme since the Trump administration increased scrutiny on Switzerland first and then labelled it a currency manipulator in 2020. In the first FX report under the Biden administration (published in April), the US Treasury lifted manipulation tags to Switzerland and Vietnam and did not designate Taiwan as a manipulator despite it having met all quantitative criteria. That was seen as a sign of the Treasury adopting a lighter touch to foreign currency practices under Janet Yellen. In practice, however, the three countries were left under deep scrutiny and the Treasury signalled it would have engaged in bilateral talks to discuss potential unfairness in FX practices.

Those talks yielded an agreement between the US and the Vietnamese monetary authorities in late July, where the USTR promised not to impose tariffs in exchange for a pledge not to engage in the devaluation of the dong for competitive purposes.

Bullish CHF bets and speculation of US Treasury pressure

Recent bullish bets on CHF may be partly correlated to speculation that the US Treasury is applying pressure on the SNB to refrain from FX intervention. What must be noted, however, is that the Treasury is entitled to target only those countries that devalue their currency to gain a competitive advantage on their exports. A small, developing country, highly dependent on goods export, such as Vietnam, easily falls into this definition. Switzerland, despite having a large current account surplus and having had net exports in goods to the US worth $57bn in 2020, has long used FX interventions explicitly as a monetary policy tool and not for trade-related purposes.

At the same time, the decision of the US to strike a conciliatory tone with Vietnam in recent bilateral talks may have been dictated by some geopolitical considerations. Vietnam has been a preferred country for re-routing the production processes hit by US tariffs on China and is seen as having a relevant role in the US plans to reduce China’s influence in Asia. Switzerland surely could not count on any geopolitical leverage if indeed the Treasury decided to address the SNB currency practices more aggressively.

The next FX Report is due in October, but a potential reaction to the SNB to Swiss franc appreciation through FX interventions may already give us hints that Switzerland’s authorities are not – as they have reiterated multiple times – feeling the pressure from the US Treasury. Let’s keep an eye on the weekly CHF sight deposit data to see if SNB FX intervention does pick up now that EUR/CHF is trading in the lows 1.07s.

We had been bullish EUR/CHF this year on the more constructive global cycle, yet the more mixed global picture and increased ECB dovishness suggest that bullishness will have to be pushed back into 2022 and wait on the turn in the ECB cycle.

Instead, we’ll be watching to see if SNB intervention picks up here at 1.07 – but last year’s low near 1.05 looks more of a line in the sand – and it could even be nearer 1.03 if the SNB is using the real trade-weighted CHF as a guide. Indeed, CHF strength is coming at a time of relatively benign global conditions (cross-market volatility remains near its post-crisis lows) and we find it hard to argue that recent CHF gains have been driven by safe-haven flows.

The wild card would be the SNB doing something on rates – e.g. a surprise cut in rates to -1.00%, while protecting domestic banks with greater exemptions from negative rates. Yet SNB speeches are few and far between and such an event risk may not emerge until much closer to September’s SNB meeting.

GBP/USD: Bears brace for July low ahead of BOE

GBP/USD bears keep controls around 1.3620 amid the initial Asian session on the Super Thursday, after refreshing the monthly low with 1.3609 due to the Fed tapering before a few hours. The cable pair’s recent fall broke an ascending support line from July, which in turn joins bearish MACD signals to hint at the quote’s further downside.

Fed leaves fed funds rate, bond program unchanged as widely expected. The Fed held the base rate near zero, lowered its growth estimates and predicted higher inflation, but it was Powell’s insistence that a taper is coming that garnered the market attention.