Thursday’s ECB announcement delivered an unsurprisingly non-committal message from President Lagarde, although the meeting itself was far from a non-event.

The balance of risks was upgraded from ‘tilted to the downside’ to ‘broadly balanced’ in light of the recent improvements in the health crisis and the reopening of economies across the European continent. Policymakers are also said to be more optimistic on the Euro Area outlook than at the March meeting, with Lagarde stating that the bank expects growth to rebound strongly in the second half of 2021. Growth and inflation projections for this year and next were upgraded, as anticipated. The Euro Area economy is now expected to expand by 4.6% in 2021 and 4.7% in 2022 versus the previous 4% and 4.1% projections. Perhaps of greater significance is the upward revision to the staff inflation forecasts, which were shifted fairly markedly higher to 1.9% in 2021 and 1.5% in 2022 from the 1.5% and 1.2% respectively estimated in March. 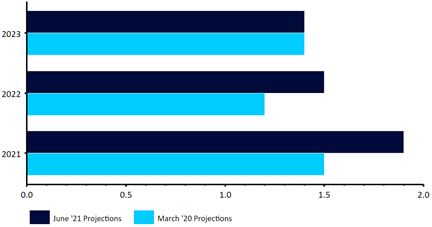 Lagarde did, however, seem relatively upbeat about the risk of a spillover in US inflation, which we believe is perhaps a slight underestimation on the ECB’s part. This is particularly the case given the scorchingly hot inflation numbers out across the Atlantic on Thursday afternoon, which showed that US headline inflation jumped by 5% in the year to May. This is certainly something that will warrant serious conversations at the FOMC’s June meeting next week, where we expect Fed members to upgrade both their macroeconomic and interest rate projections.

Despite its upbeat assessment on the outlook, the ECB remained committed to its accelerated pace of asset purchases announced earlier in the year. Investors were also left none the wiser as to whether the bank believes that a tapering in asset purchases will soon be required, and there was no word on whether the PEPP may need to be extended beyond March 2022. We think that decisions on both are being punted to the September meeting, when the ECB will release its next set of macroeconomic projections. At this stage, the ECB should have a much clearer idea as to the state of the health crisis and, more specifically, its impact on Euro Area inflation. Given our expectations that inflation will continue to surprise to the upside, we expect the September meeting to be key. The hawks in the Council will not remain quiescent for long.

As far as the FX reaction is concerned, we’ve not seen too much volatility in the euro on the back of yesterday’s announcement. We think that this is in light of the fact that there were no major surprises from the ECB - the upgrade to the growth and inflation forecasts were largely expected and there very few in the market bracing for any immediate news on a possible tapering of asset purchases.

EUR/USD looks to 1.2200 amid weaker US Treasury yields, risk-on mood

EUR/USD is advancing towards 1.2200 amid the US dollar’s weakness on softer Treasury yields. Dovish Fed expectations continue to persist despite hotter US inflation. The euro benefits from the ECB’s progressive economic outlook.

GBP/USD is trading below 1.4200, keeping its range intact after the UK GDP missed estimates with 2.3% in April. The cable shrugs off a softer US dollar amid a cautious sentiment ahead of the G7 meeting and fresh chatters over a delay in the UK reopening.