US initial jobless claims slipped 1k to 211k in the week ended May 18 after dropping 16k to 212k in the May 11 week (revised from 212k). This is the lowest since the 193k from April 13, with that level not seen since late 1969. The 4-week moving average moved down to 220.25k from 225k. Continuing claims bounced 12k to 1,676k in the week ended May 11 after falling 22k to 1,664k previously (revised from 1,660k). The job market remains strong, but the data will be overlooked as trade issues remain the focal point for sentiment. The Dollar moved to session lows against the Yen and Euro after the slightly better than expected jobless claims, though it had been trending in that direction ahead of the data.

Earlier USDCAD rallied to one-week highs of 1.3476, up from the near one-month low of 1.3358 seen following the better Canada retail sales outcome on Wednesday. The sharp fall in the oil price has been the main driver of the latest rally, with WTI crude trading under the key $60 mark for the first time since late March. Risk-off conditions have weighed on the CAD as well, with not only the US/China trade spat impacting, but also concerns that the USMCA trade agreement will not be ratified, given the current war between the White House and Congress. The next USDCAD upside target comes at 1.3513, the May 17 high, following the strong resistance at 1.3500. The daily chart has failed to close north of 1.3500 since January 2nd. 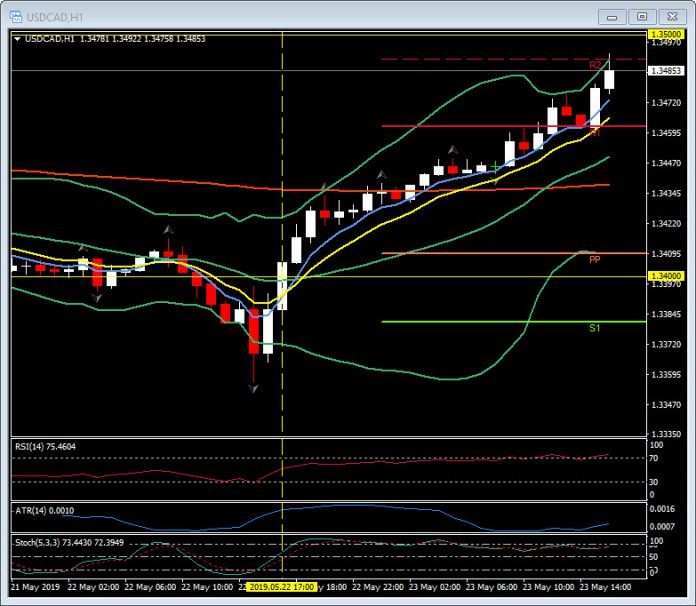