Most of Central America south of Mexico was part of Capitania General de Guatemala during the colonial period and after independence was succeeded by the Republica Federal de Centro America. This split into today’s states in 1841. Belize is an exception - it was settled mostly by ex slaves from the English speaking Caribbean

In 2004 the Central American Free Trade Agreement was signed which effectively extends NAFTA to Guatemala, El Salvador, Honduras, Nicaragua, Costa Rica and the Dominican Republic. Zonas Francas are a major feature of the economies of the region - these are free ports where inputs can be imported without passing through customs and the finished goods reexported. Countries benefit from the jobs they create. Remittances from overseas workers, particularly in the US, are very significant in balancing the current accounts to make up for deficits in goods trade.

In the post 1945 period the US interfered regularly in the affairs of the states of Central America and the Caribbean as it viewed this region as it’s backyard and was sensitive to perceived external penetration. Thus the US regularly backed reactionary right wing regimes which didn’t allow normal political development with opposition driven underground. The region was host to several low level civil wars in the 1960’s and 70’s.

In 1979 there was a breakthough in Nicaragua where the Sandinistas succeeded in overthrowing the Somoza dictatorship. The US leaned on it’s neighbours, mostly Honduras, to host the armed opposition to the Sandinista regime (the Contras) and this, in turn, caused the Sandinistas to ask the USSR and Cuba for support. Thus US intervention became a self fulfilling prophesy where each action on it’s part provoked a counter reaction. Nicaragua, then, provided support to the armed rebellions in each of Honduras, El Salvador and Guatemala such that in the 1980’s all of the region’s civil wars were interrelated.

It was only in 1992 with the signing of the Chapultepec accords that the series of interrelated conflicts in the region was brought to an end. This was only possible because the Cold War between the US and the USSR had effectively ended two years previously and the US was prepared to take a more tolerant attitude. If we look at the four economies of the region since 1996 we have the following: 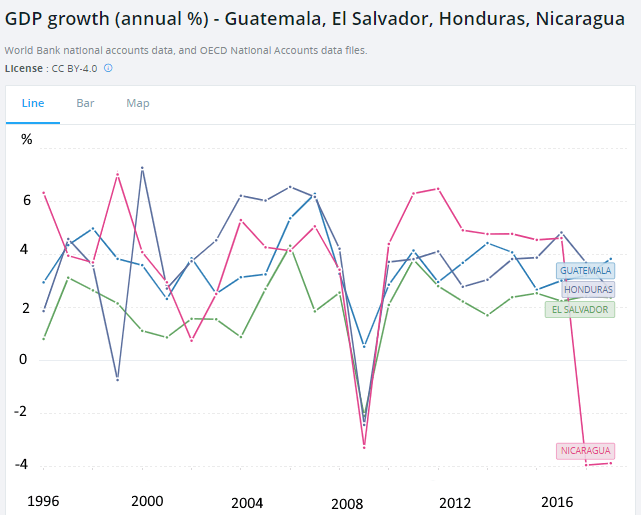 It can be seen that growth has been modest but reasonably steady between 2% and 4% p.a. except for a dip in 2009 coinciding with the world recession. In the last two years Nicaragua has diverged from the other countries and entered a downturn due to the political crisis there.

If we look at the homicide rates we get: 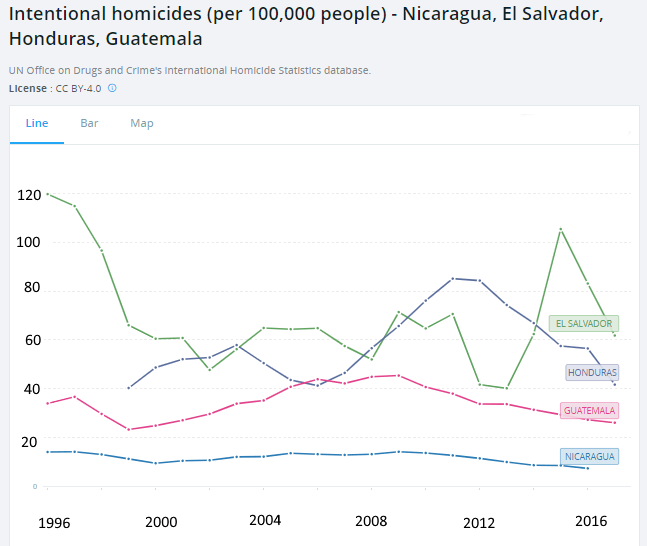 It can be seen that for Guatemala, Honduras and El Salvador the homicide rate is between 30 and 60 per 100,000 population and for Nicaragua it is somewhat lower. Just to put these figures in context the homicide rate for the USA is about 5 per 100,000 and in France (which could be considered representative of the EU) it is slightly above 1 per 100,000. Thus Central America has homicide rates that are barely below the levels of full scale armed conflict and much of this may be attributed to the legacy of the civil wars in the 1980’s and the proliferation of small arms in the region.

What is remarkable is that the economic management of the countries is, in general, competent with low inflation and Government borrowing and the scores on the United Nations Human Development Index continue to improve.