Western Texas Intermediate, aka WTI, records a solid bounce after testing the 100-EMA on the downside near $105.88 a barrel near the daily low and got bolstered late, as OPEC+ cuts 2022 market surplus from 1.4 million BPD to 1 million BPD according to sources cited by Reuters. At the time of writing, WTI exchanges hand at $109.86 per barrel.

Oil is rising due to several factors striking the global economy. Over the weekend, the G7 is weighing on putting a lid on Russian oil prices and looking for other ways to supplant Russian oil and gas, as long as Russia keeps battling Ukraine. Meanwhile, Libya’s state oil company reported that it might suspend exports from the Gulf of Sirte amidst a worsening political crisis. Libya’s inability to resolve its political turmoil will shrink the oil market by 600,000 BPD.

In the meantime, talks between the US and Iran will restart in the coming days, according to EU chief diplomat Josep Borrell. If there is progress in Iran’s nuclear deal, crude from the country will begin to flow into the markets as a sign of relief due to the petrol shortage and high energy prices.

At the time of writing, it crossed wires that France President Macron told US President Biden that UAE is producing oil at near-maximum capacity after a conversation with UAE’s crown prince. At the same time, the Department of Energy (DOE) reported that strategic petroleum reserve oil stock dropped to 497.9 million barrels, the lowest level since April 1986.

In the meantime, the US Energy Information Administration said the timeline of publication of its Petroleum Status report that was scheduled to come out last week is still unclear but will not be published Monday, according to Bloomberg.

The US crude oil benchmark price is trapped within the 50 and 100-EMA’s in the daily chart, each at $110.33 and $105.88, respectively. Nevertheless, WTI is upward biased, as sellers could not drag prices below the psychological $100 level.

WTI traders should be aware that despite WTI’s falling below a six-month-old upslope trendline last Tuesday, it does not mean that WTI’s trend shifted; it is just slowing, and oil is already trading near last Tuesday’s prices as WTI consolidates. 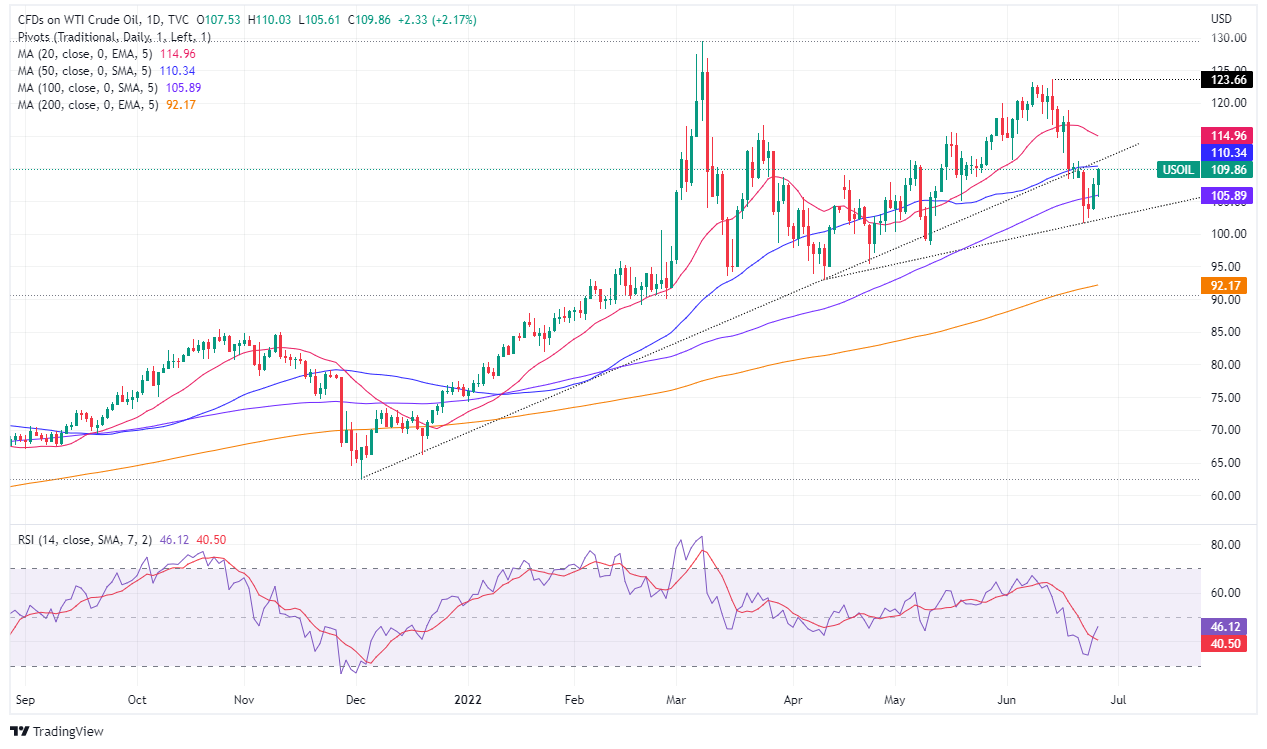