The European currency regains the smile and pushes EUR/USD back to the 1.2050/55 band at the beginning of the week.

EUR/USD manages well to reverse two consecutive daily pullbacks, including Friday’s important drop of nearly a cent to the 1.2000 neighbourhood on the back of the renewed offered note surrounding the greenback.

Also propping up the upside traction in spot, yields of the key German 10-year Bund climb further to levels last seen in March 2020 around -0.16%.

In the meantime, the optimism around the growth prospects in the Old Continent appears to lend support to the move higher in the European currency at the beginning of the week. This view seems also underpinned by news citing the EU’s proposal to ease travel restrictions within the bloc, only for citizens who are vaccinated.

In the euro calendar, German Retail Sales expanded markedly 7.7% MoM in March, although the final Manufacturing PMI eased a tad to 66.2 for the month of April (from the preliminary reading at 66.4). The manufacturing gauge in the broader Euroland followed suit and came in at 62.9 (from 63.3). 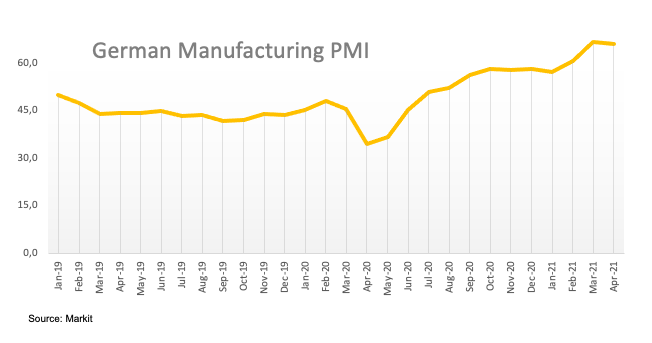 EUR/USD’s monthly rally met strong resistance around 1.2150 (April 29), although Friday’s loss of momentum dragged the pair to the vicinity of the psychological 1.2000 yardstick. The strong advance in the last weeks was sustained by the persevering selling bias surrounding the greenback, which gained extra pace following the dovish tone from the latest FOMC event. Also propping up the better mood in the European currency appears the investors’ shift to the improved growth outlook in the Old Continent now that the vaccine campaign appears to have gained some serious pace. In addition, solid results from key fundamentals pari passu with the surging morale in the bloc also collaborate with the monthly recovery in the pair (from the vicinity of 1.1700 to the monthly highs round 1.2150 so far).

Eminent issues on the back boiler: Asymmetric economic recovery in the region. Sustainability of the pick-up in inflation figures. Progress of the vaccine rollout. Probable political effervescence around the EU Recovery Fund. German elections.