Outlook: Ahead of the JOLTS report today, ZipRecruiter reports the lowest ratio of unemployed to openings ever seen. According to the WSJ, there are about 6.9 million unemployed and seeking work but 11 million job openings. This is the closest thing we have to Japan’s applicants-to-jobs ratio, a valuable measure of labor market tightness.

Jolts will lag these numbers by about a month. Record numbers of workers are quitting, and while the participation rate edged up to 61.8%, this is still under the pre-pandemic rate of 63.4% rate in Jan 2020.  Note that the Jolts report and Friday’s CPI are the last two big releases before the Dec 12 Fed policy meeting. We have no reason to suppose the most recent data has more influence, but these two could be the exception.

Inflation on Friday is forecast to be a little higher, but at the same time, voices are raised about the Fed acting prematurely and triggering a recession. Yesterday former TreasSec Summers put the probability of a recession at 30-40%. Bloomberg writes that “… the Treasury yield curve only flattened again, in a sign that bond traders still see Fed tightening slowing growth eventually.”

To those who complain about the Fed squashing the recovery, see these charts from the always astute Scotia Bank, which the Daily Shot leads with this: “The real fed funds rate is at extremes no matter which index is used to measure inflation. It points to extraordinary levels of monetary accommodation.” If the crybabies can’t survive with Fed funds at 0.25% or 0.50%, maybe they don’t deserve to be in business. 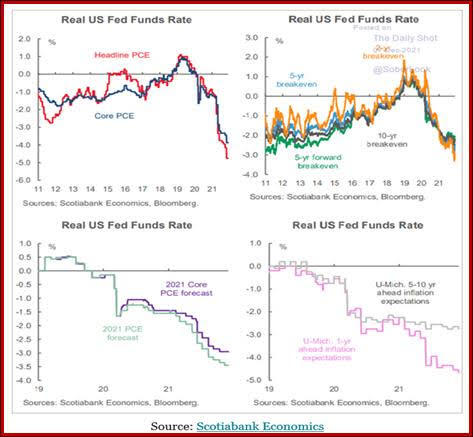 Mini-Rant: If there is one thing we dislike about the new vocabulary (“meme,” “woke”), it’s the word “pivot.” It first came into wide use when the previous president was imagined able to change his stripes and pivot to a sane, reasonable and competent manager.

We do get pivots—abrupt reversals—in finance, generated by powerful fresh news. The tech bubble started in 1995 and lasted 6 years—until the TechWreck in 2001. China shifted from a fixed rate to a dirty float in 2005. See the chart. Oil has had several Shocks, starting with 1973. The chart is from Macrotrends.net and shows recessions.

But in the real economy and real society, pivots are quite rare. Things do not turn on a dime very often. It takes a big, fat Shock to get a substantial and lasting reversal. The recognition of Covid in Jan-Mar 2020 was one of them. Any indicator you can name fell straight off the cliff. In the financial crisis of 2008-09, many indicators crashed, and ironically, we had a warning that time—from former Fed board member Mishkin, who called it at the Jackson Hole summit the summer before. Unfortunately, we wrote about his paper at the time and deemed it crying wolf.

Yesterday the NYT published a chart showing that the recovery time for the stock market from three Covid shocks has fallen from half a year to two weeks. Let’s observe that the first incident entailed a lockdown and the loss of millions of jobs. That was the Shock. We did not get an upper-case Shock from the next two incidents because jobs and therefore consumption were not so deeply affected. It’s too bad we can’t turn the jobs chart upside down—the correlation would be clearer.

The point is that after a genuine Shock, you tend to get a lengthy recovery period speckled with aberrant or oddball changes in behavior and even institutions. We’d call the spending splurge in March 2021—one year after the lockdown—aberrant. A number of studies show that by now, the savings surge occasioned by the government handouts is fading, too. And as we know, a surprisingly high number of persons are unwilling to fill the supposed 10 million job openings.

This implies that the recovery is not done and when it is done, the economy will not look like it did before. The poor will always be with us, of course, but everything from home-cooking (and baking!) to office occupancy rates is permanently altered. The word pivot is wrong. A better word is “bending.” A simple Google search finds that the average banker job offers a salary of $43-64,000. That includes tellers and not just the Suits. The top bank CEO’s have a median salary of $133,527, and even that includes small-town banks. The CEO’s at the big banks make more, of course.

Now look at long-haul truckers—the average is $64,210. Truckers are making more than the average white-collar bank worker. The self-employed long-haul truckers may end up farther down in compensation once the supply chain issue gets better, but the trucker employed by big long-haul companies can fight like tigers against pay and benefit cuts. Will it be a permanent change? Nobody knows. But the American ideal of scrambling out of the working class to the middle is alive and well. To the degree they succeed over the long run, by which we mean 3-5 years, a lot of other things are going to change, too. House prices, for example. Renters shift to owners. We have seen house prices fall in the past, but because of financial market problems, not sociological reasons—a bend in class. So the question becomes whether enough baby boomers will die in those next 3-5 years to mitigate the house price rises coming from the class shift.

Articles abound about the “new normal.” There is no such thing. The economy and society are in a perpetual state of change. What was normal in 1955 was odd in 1965 and what was normal in 1985 is completely abnormal today, and not just those shoulder pads. We update our norms but we never update our economics. We imagine that an unemployment rate purportedly at 4% means the economy is okay. But the workforce tells a different story entirely. It’s not just false and misleading data. It’s a misunderstanding about how things work. While we can count the vast and never-ending materialism of the American consumer, we can’t count on the move to the middle class that started after WW II but ended sometime in the past two decades—when income inequality got to be a very real thing. Not to get political, but the citizens of 1965 would never have elected a boorish incompetent lout like our former president. What else are we missing?

Bloomberg has an article titled “From the Great Resignation to Lying Flat, Workers Are Opting Out.” In the US, more than 24 million resigned between April and September this year. Other countries are seeing some of the same thing. “… the pressure has been building in developed countries for decades. Incomes have stagnated, job security has become precarious, and the costs of housing and education have soared, leaving fewer young people able to build a financially stable life.” It’s not just the kids--malaise spreads across several generations.

In China, the “lie flat” movement is also about opting out of the grueling work schedules and climbing the ladder—and even got a rebuke from Pres Xi.

In the US, blame the pandemic. When deaths looms everywhere, an unfulfilling job seems silly. “The pandemic appears to have brought these concerns to a head. Two-thirds of millennials who left their jobs in 2021 cited mental health reasons, according to a Mind Share Partners survey, and the proportion for Gen Z was even higher, at 81%.”

“The vast number of people quitting their jobs in the U.S. and Europe is a sign of a structural, psychological shift,” according to [“management experience”] Qualtrics’s Granger. People seek a higher purpose than a paycheck. (Sounds like the 1960’s to us.).

“In China the shift may prove to be even more fundamental. The Communist Party is trying to defuse the lie flat phenomenon by promising continued upward mobility, with plans to double the size of the middle-income segment of the population by 2035. But slowing economic growth is leading the party to focus more on how those gains are distributed. Recent policies aimed at improving conditions for gig workers and moderating housing and education costs aim to support a better quality of life.

“If these preoccupations about the value of work persist, they may—in time—influence the course of economies.”

Well, yes. And the robustness of growth is seriously threatened, too. Not growth per se, just the wild stuff.