Italy has a major referendum on December 4, the results of which could mark the start of an Italian exit… yet U.S. and most global stocks keep going up. They shot higher after a brief Brexit breakdown. They zoomed higher still after an even shorter Trump slump. Shock after shock is having no impact on markets. They just keep heading on up.

What do you think? Would a crack-addict be realistic about his or her chances of surviving a jump off a roof?

Polls are telling us that this referendum for constitutional reform by Prime Minister Renzi is likely to fail. “NO” is likely to win the day.

Of course, the polls haven’t exactly been a shining light of late… so we’ll see. But have you noticed how these events have tended to favor the far right and exit policies rather than the centrist and unifying parties?

Renzi has vowed to resign if “NO” takes the day and that opens the way for the far-right party to take over and move towards removing Italy from the euro and/or Eurozone, à la Brexit and Trump. And it’s the only way Italy can devalue, default, rebalance, and have a chance of coming out of its debt crisis – at the price of high short-term inflation, of course.

Right off the bat, they could default on their Target 2 loans, largely to Germany, of $344 billion. In total, the weaker Eurozone countries owe Germany $676 billion! So if Italy leaves the Eurozone, the impact would be way worse than anything we’ve seen (and will see) with Brexit.

They don’t yet appreciate that Brexit marked the beginning of a major anti-globalization movement that was seconded by the Trump victory. More importantly: Italy is the “death knell.”

Greece was bailed out because it was small enough and Germany and the European Central Bank (ECB) didn’t want to create a reaction of more euro exits in response if Greece was forced to exit.

But Italy isn’t small enough. In fact, it’s too big to fail… and to bail out. It’s the third largest country in the euro and the fourth largest in Europe. If it fails, all of Southern Europe will likely follow.

Italy’s stock market is already telescoping a major collapse in Italy, as is recent trends in its Sovereign bonds that have spiked a bit more than all the rest. 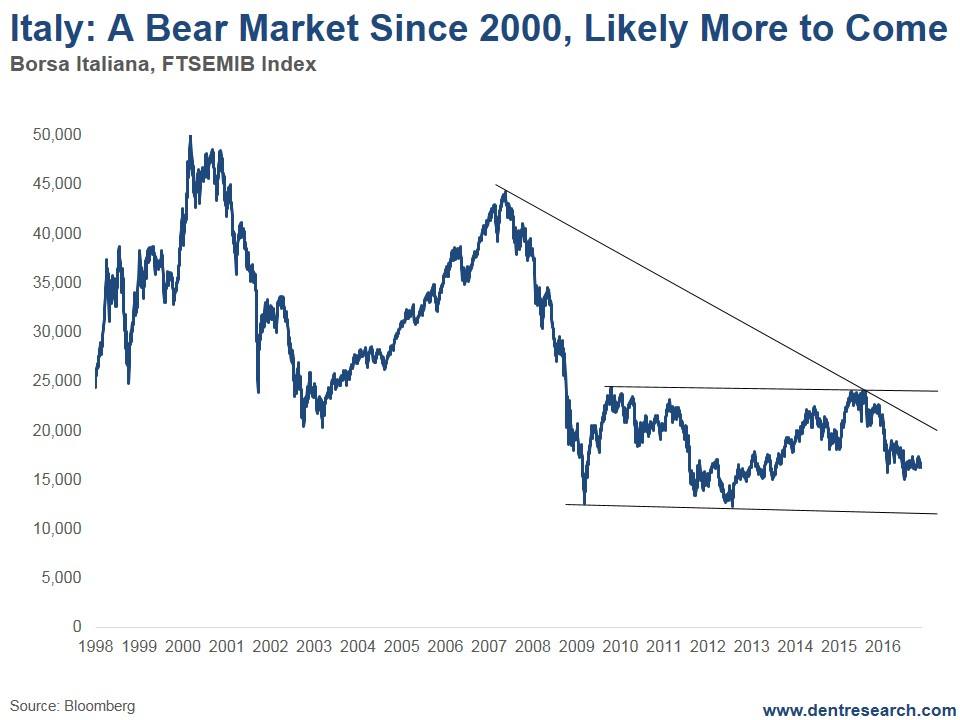 Italy and Southern Europe stocks peaked back i2000,as did the Stoxx 50. Italy has only seen lower highs and lower lows since then and that is the most bearish of patterns!

It’s been in a long trading range since late 2009 that would be broken to the downside if it broke below 12,000. Should that happen, the projection would be down to near zero!

Does that sound like a totally bankrupt country or what?

Only a break back above 25,000 would be re-assuring… and I see almost no chance of that happening.

I’ve been warning that Italy is already bankrupt. It’s government debt is beyond 135% of GDP. And its biggest problem is its 18% and rising non-preforming bank loans. Normally, 10% indicates bankruptcy.

So why don’t Italian 10-year Treasuries rise back to the 7.2% yield spike they saw into late 2012? Because Mario Draghi keeps buying them (and others) like crazy. And he continues to threaten to buy more to kill any short traders.

Can you say “rigged market?”

Italy is the next Greece and there’s no way to bail it out, especially with Germany having a slower-than-expected economy (although it’s not unexpected to me… my demographic models forecast this slowdown long time ago, and it sees Germany facing the greatest decline of any country into at least 2022).

If Italy does exit, it will spell the end of the euro and Eurozone as it is.

The markets reacted irrationally to Brexit and the election of Trump, just as any crack head would. And, just like any crack head, they’re hard to predict in most instances but one: they’re always making the wrong decision.

My dear friend, Andy Pancholi of the Marketing Timing Report, has a major turn date around December 9. It’s likely the markets will turn down into the Italian referendum at first and then they could either accelerate down, or turn up one more time if it surprisingly passes.

This is an important time period to watch and to recalibrate investment strategies. Stocks continue to be harder to predict as they’re the most manipulated by QE policies and the last place for investors to go in a zero or negative rate environment.

Hopefully this “market on crack” will become more predictable between now and December 4!