Tesla (TSLA) shares finally received the pop FXStreet had been waiting for on Thursday and especially Friday with strong move. This means the electric vehicle leader is now on the verge of breaking $850 and then targeting all-time highs. Tesla (TSLA) shares closed at $843.03 on Friday, up over 3%. Tesla was strong for most of the session but really took off after lunch and closed near the high of the day, always a strong sign.

Elon Musk is now adding some consultancy work to his ever-growing list of accomplishments as news reports hit that he dialled into a senior meeting of VW executives last Thursday. The appearance of Musk was at the invitation of Volkswagen CEO Herbert Diess, who is looking to Tesla and Musk for clues on how to speed VW's transition from legacy automaker to electric vehicle behemoth.

Why is Tesla (TSLA) stock up?

The main factor behind the price rise though is not this appearance but is down to a strong surge of interest from retail traders, who grabbed onto the news that Michael Bury had closed his bearish position in Tesla. This led many to believe Bury closed via buying shares, but in fact this was not the case. Bury had bought put options to take a bearish position. Nonetheless, it made for good copy and saw a surge in retail interest with Tesla topping social media mentions on WallStreetBets and other social media trading boards.

Tesla will release its next earnings this week on Wednesday after the close.

Tesla has finally broken the long-term trend channel in place since May of this year. In doing so, it has entered into some volume resistance with a volume profile bar emerging at $850. However, this is not as strong as those lower down at $680. Earnings are on Wednesday, so this will be the real decider of the next move. This strong surge will make those results even more important as expectations are now super hardcore high, to use Elon's term. Any weakness in outlook or mention of chip issues or supply chain could see a sharp fall in the Tesla share price.

In our view, the risk-reward going into the numbers is to the downside, so we would certainly be taking some longs off the table and using a trailing stop. The Relative Strength Index (RSI) is very close to overbought. This indicator can vary from market to market, and it is always best to see how it works generally on the stock or market you are looking at. We can see clearly for TSLA price action that the RSI is actually pretty accurate and works well. The last time it was overbought was at all-time highs in April, and look what happened to the share price then. 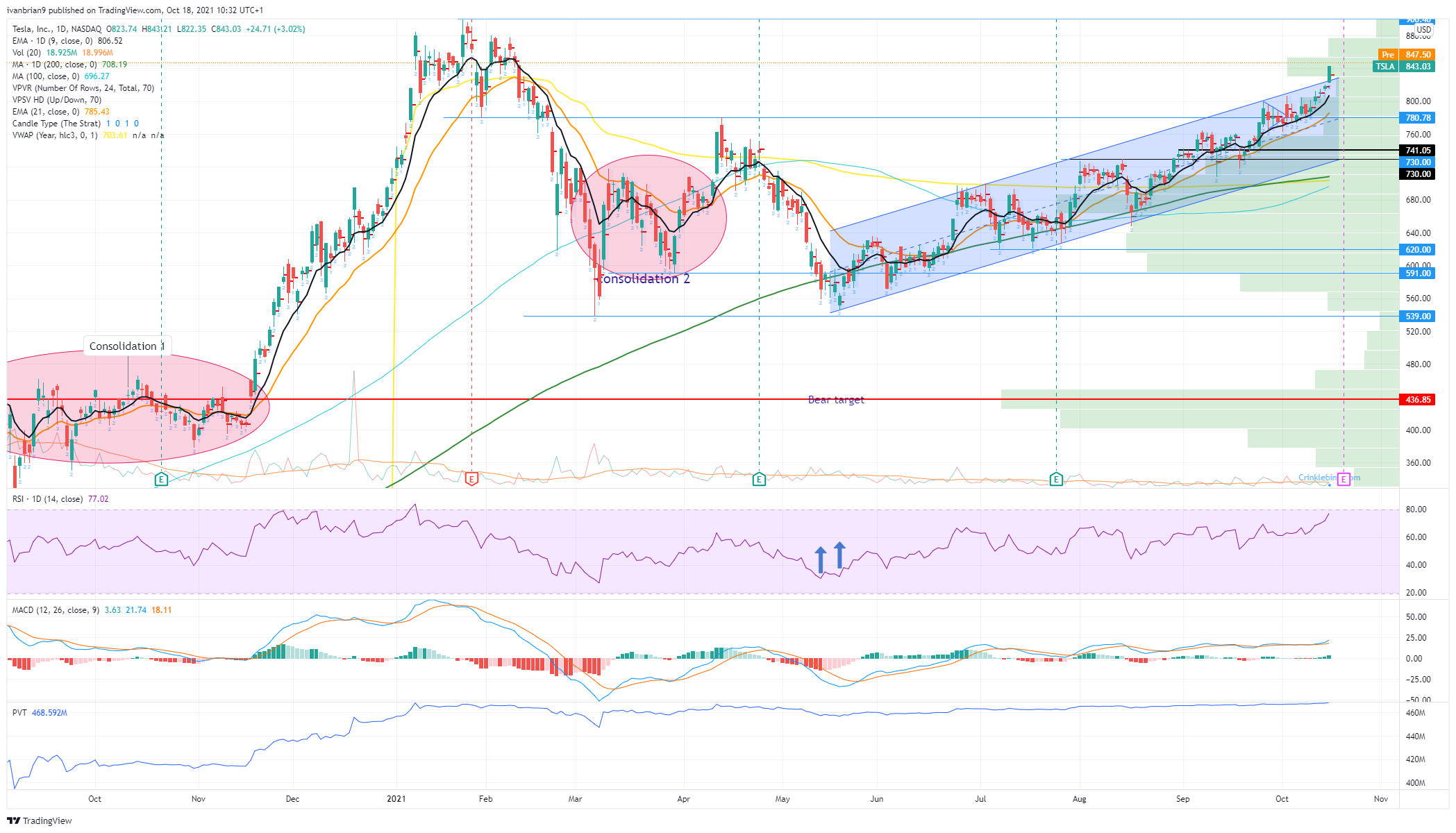