When I write the Online Trading Academy Forex newsletter, I give my opinion about what I believe is happening to the currencies of the world based on the news I hear, the experts I follow, and my personal experiences of the economic cycles I have seen in the past. This fundamental information helps me understand what reports and indicators the economists of the world believe will shape future events. The charts provide me with the clues as to where the buyers and sellers are waiting to act in the future based on their actions in the past. As such, when I do my analysis, I always factor in the message from the charts as the final and most important piece of the puzzle before I act on my opinion. The US Dollar Index (USDX) is the main currency chart I watch for clues as to the sentiment of the currency traders of the world, and for the places where battles have taken place in the past that may once again shape the future.

The USDX is a geometric mean weighted index which tracks the US Dollar versus a basket of currencies, the Euro, Japanese Yen, Canadian Dollar, British Pound, Swedish Krona and Swiss Franc. This index was started in 1973 after the US Dollar peg to gold was removed by the Nixon administration in 1971. The base of the index was set to 100, and the movement of the USDX is relative to this base. This means that a value of 120 would suggest that the US dollar experienced a 20% increase in value over the time period.
Conversely, a reading of 80 would mean a 20% decline in both the index, and the purchasing power of the citizens of the USA.

The weekly chart of the USDX below shows parts of the 4 stage cycle from 2005 to 2008. A USDX rally in September and October of 2005 led to a Stage 3 top near 92.00 in November and December of 2005. The USDX began a Stage 4 decline from January, 2006 to February, 2008, followed by a Stage 1 accumulation from March, 2008 to July, 2008 between 71.00 and 74.00. The Stage 2 upside breakout in August, 2008, was due to the credit crisis and the flight to safety by money managers into US treasuries which caused a massive rally in the USDX of as much as 60% versus some of the various world currencies. The vertical rally ended when the USDX reached a very large supply level near 90.00 in November of 2008. This supply level is one of the clues that a trader needs to look for when forming your opinion based on the information on the charts from the past. This is the main focus of all the various Extended Learning Track (XLT) classes in all the different asset classes we teach. We simply want to know where the buyers are likely to be, and where the sellers are likely to be so that we can trade with them. Once price reached the 90.00 supply level, a period of horizontal trading happened for several weeks, followed by a fierce sell-off in December 2008. The horizontal trading after a Stage 2 uptrend becomes a Stage 3 top if price closes below the range as it did. If the supply at the 90.00 level was absorbed, then the USDX would have rallied up to the next supply level, and this would have become a trend continuation pattern instead. As the USDX fell from the 90.00 supply level, instead of selling off all the way back to the prior year’s low, the USDX ran into a demand level near 80.00, and once again sharply reversed higher to retest the supply level near 90.00. As I always say when asked what will happen next, if all the supply at the 90.00 level can be absorbed, then price can move higher to test the 2005 supply level near 92.00 next; but if the number of buyers once again drops to zero instead, then price would retest the demand levels near 80.00 again. As you can see from the weekly chart, the sellers once again won the battle at the 90.00 level, and price is now testing the 80.00 demand level this month. 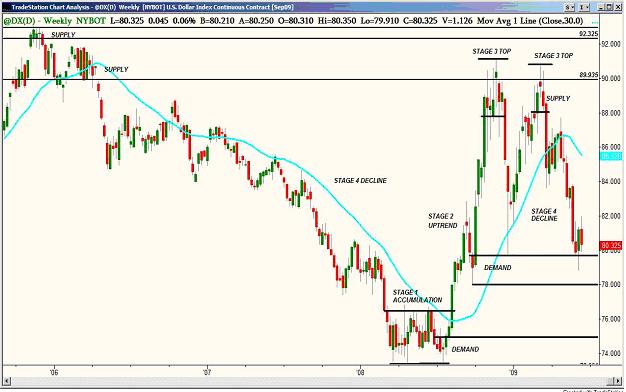 The USDX daily chart below shows the likely battle grounds going forward. If the daily demand levels around 78.00 hold, then the USDX can rally higher to attempt to absorb the multiple supply levels above. As long as the market bases and then rallies, I am a USDX buyer with the supply levels above as targets. This is despite all the talk of the rest of the world selling US Dollars, buying gold and buying commodities as a hedge. As a trader, it is important to have a logical stop loss below 78.00 in case the USDX bulls pull their bids, and the USDX trades down to the lower demand levels. At this point, no one is quite sure how rapid the decline in the USDX will be going forward, or how soon the move out of the USDX as the world reserve currency will be. All the talk on the trading desks around the world is about this event happening soon. In the meantime, as a currency trader, I will plan my trades and trade my plan because that is all a currency trader can control. We will follow the progress of the USDX, and as a US citizen, I hope the buyers win so that the money in my pocket is worth something. 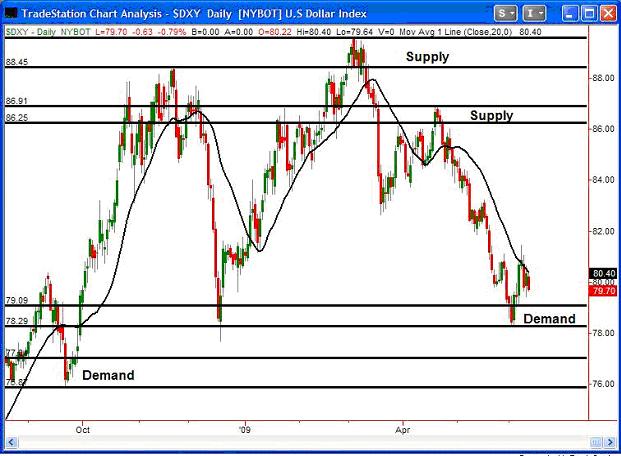