The precious metals still do pirouettes on the trading floor, but they can stumble in their choreography. The bears are just waiting for it.

With the GDX ETF soaring on significant volume on Jan. 19, the senior miners had a renewed pep in their step. With gold, silver, and mining stocks all dancing to the same beat, the precious metals garnered all of the bullish attention. However, with the trio known to cut their performances short as soon as investors arrive, will the mood music remain so sanguine?

Well, for one, the GDX ETF has a history of peaking when the crowd enters the party. For example, I marked with the blue vertical dashed lines and blue arrows below how large daily spikes in volume often coincide with short-term peaks. Moreover, with another ominous event unfolding on Jan. 19, historical data implies that we’re much closer to the top than the bottom.

From the technical point of view, we just saw another day similar to the other days that I marked with vertical dashed lines and black arrows. Those days were either right at the tops or not far from them. As much as yesterday’s (7%!) rally looks bullish, taking a look at the situation from a broad perspective provides us with the opposite – bearish – implications.

The zig-zag scenario is being realized as well. The GDX ETF moved to the upper border of the rising trend channel. Also, doesn’t it remind you of something? Hint: it happened at a similar time of the year.

Yes, the current price/volume action is similar to what we saw in early 2021. The RSI was above 60, a short-term rally that was preceded by a bigger decline, and a strong daily rally on huge volume at the end of the corrective rally. We’ve seen it all now, and we saw it in early 2021. 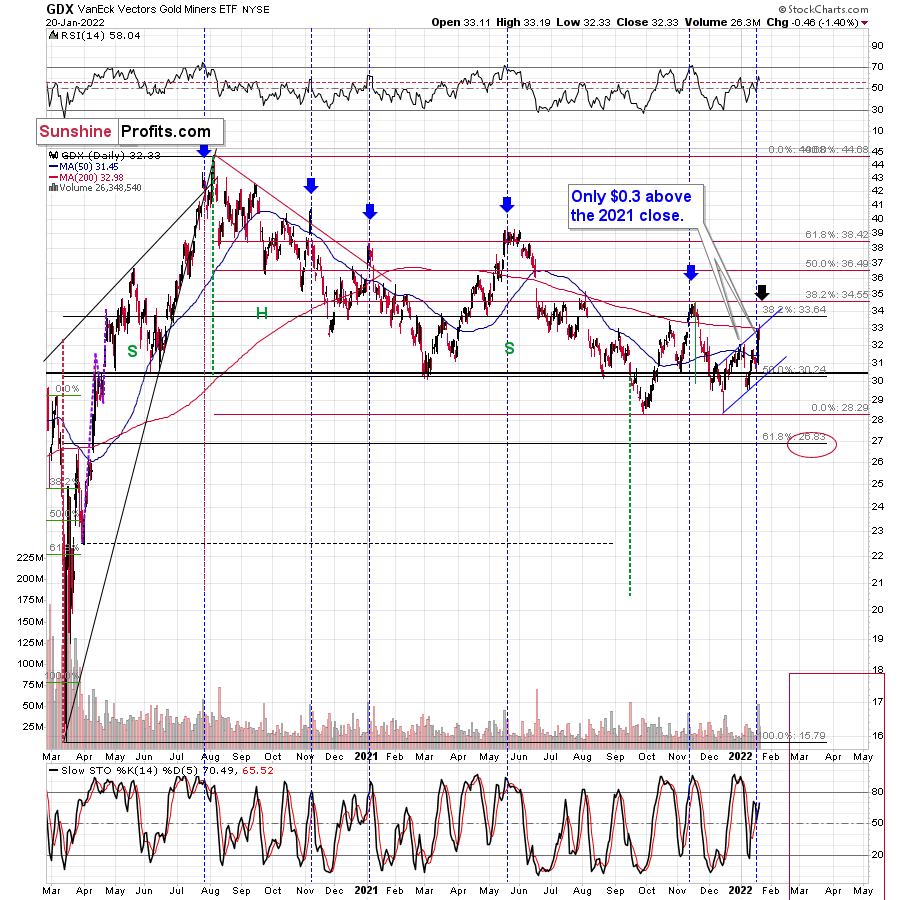 What’s more, the senior miners’ fatigue is already present. For example, the GDX ETF declined by 1.40% on Jan. 20, and the index ended the session only $0.30 above its 2021 close. Likewise, the senior miners failed to rally above the upper trendline of their ascending channel (drawn with the blue lines above). As a result, the price action resembles an ABC zigzag pattern, and while the short-term outlook is less certain, the medium-term outlook is profoundly bearish.

As further evidence, the HUI Index’s weekly chart provides some important clues. For example, despite the profound rally on Jan. 19, the index’s stochastic indicator still hasn’t recorded a buy signal. Moreover, the HUI Index dropped after reaching its 50-week moving average, and the ominous rejection mirrors 2013. Back then, the index approached its 50-week moving average, then suffered a pullback, and then suffered a monumental decline. As a result, is this time really different? Remember – history tends to rhyme, and this time the analogies from the past favor a bearish forecast for gold stocks. 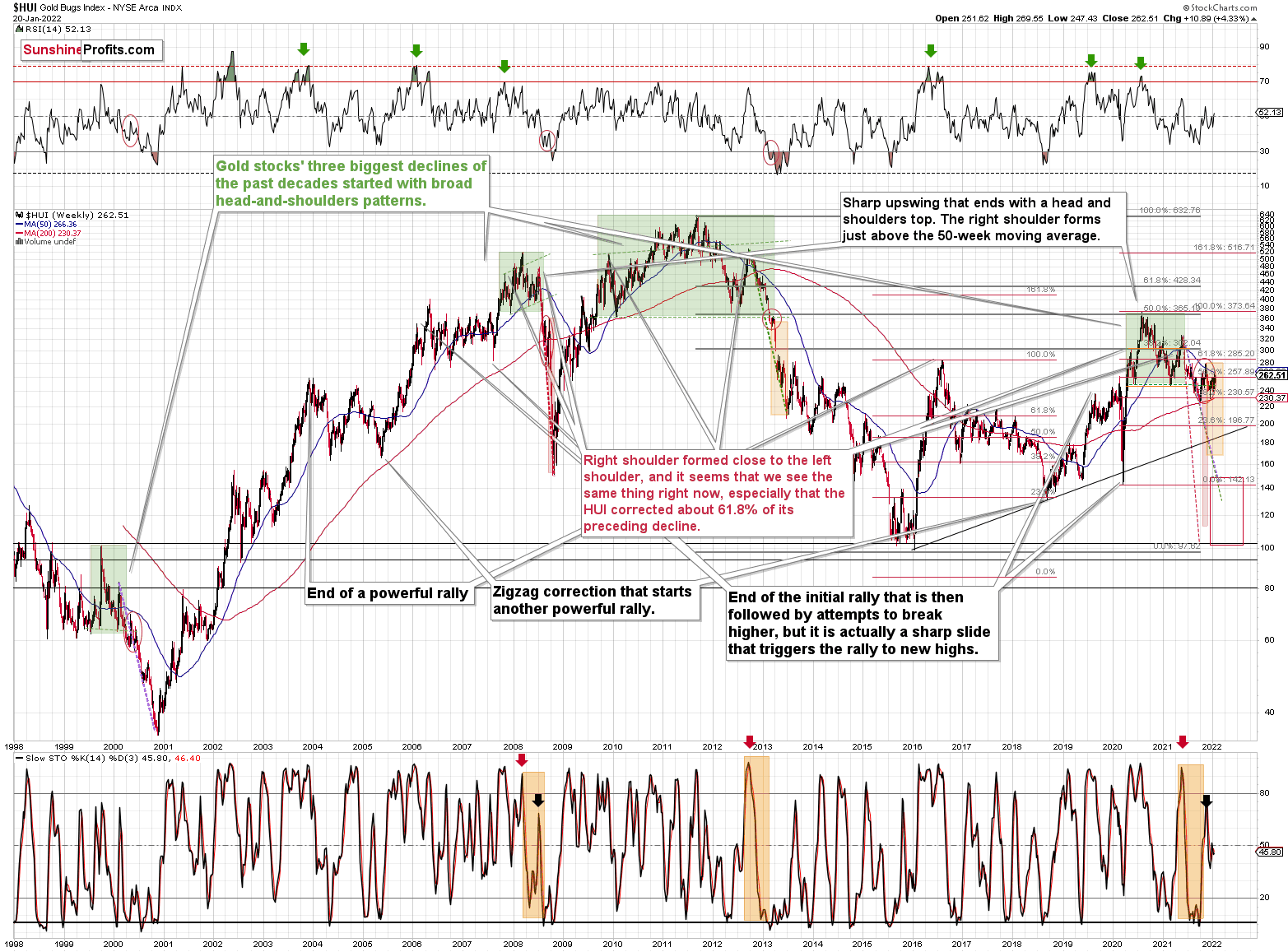 Turning to the GDXJ ETF, the junior miners were off to the races on Jan. 19. However, the size of the rally is actually smaller than what we witnessed in early 2021. Moreover, when the short-term sugar high ended back then, optimism turned to pessimism and the GDXJ ETF sank to new lows. Thus, with the junior miners’ 2021 story one of lower highs and lower lows, 2022 will likely result in more of the same. 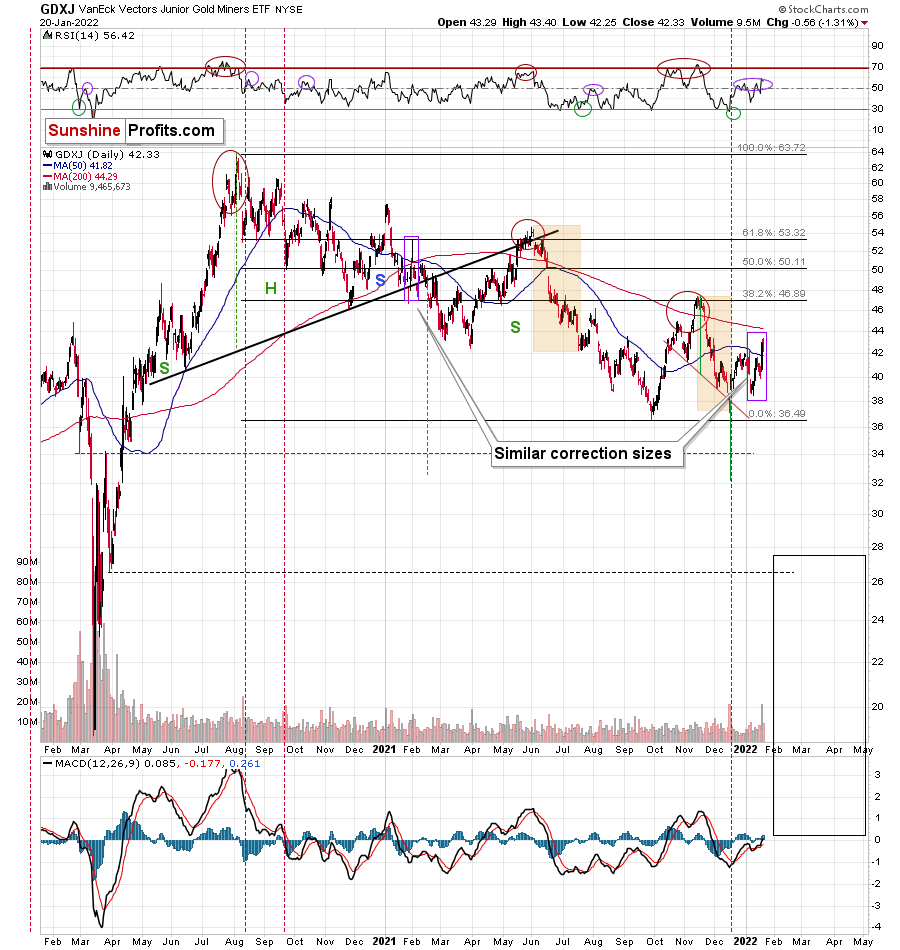 Finally, the Gold Miners Bullish Percent Index ($BPGDM) isn’t at levels that trigger a major reversal. The Index is now at 30. However, far from a medium-term bottom, the latest reading is still more than 20 points above the 2016 and 2020 lows.

Likewise, when the BPGDM hit 30 in 2013, the HUI Index was already in the midst of its medium-term downtrend (similar to what we witnessed in 2021). However, the milestone was far from the final low. With material weakness persisting and a lasting bottom not forming until the end of 2015/early 2016, further downside for gold (and silver) likely lies ahead.

For context, it’s my belief that the precious metals will bottom when the BPGDM hits zero – and perhaps when it remains there for some time. 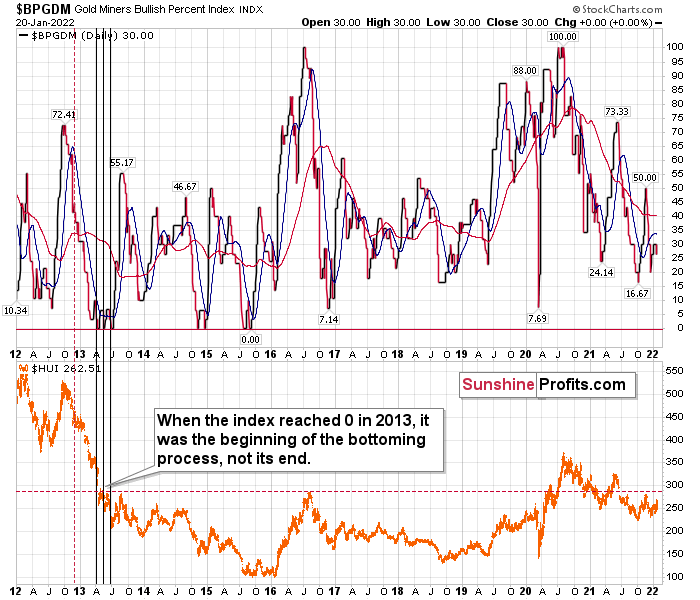 In conclusion, gold, silver, and mining stocks put on quite a show on Jan. 19. However, with their bullish rhythm known to turn bearish in an instant, investors should proceed with caution. Moreover, the data shows that when investors rush to buy precious metals, their over-enthusiasm results in medium-term weakness, not strength. As a result, the trio’s declines likely have more room to run before long-term buying opportunities emerge later in 2022.