Here is what you need to know on Thursday, June 30:

The end of the half year is upon us, and it has not been a positive start as we are all well aware. It has been one of the worst starts to a year by equities in about 50 years and much the same statistic for the bond market. In fact, it is one of the worst first halves of the year for the bond market ever. Nice reading for the pension, pot, that reminds me I better get switching! A bit late now as the damage is done, although more may be on the cards.

Investors remain steadfastly bearish, judging by the latest investor surveys that frequent the ether around this time. The good news, if there is any, is that July is historically a profitable month for equities. In fact, July is the most profitable month of Q3. Added to that nascent positivity is the fact that the end of the first half of the year, i.e. today, is historically positive for the Nasdaq and S&P while curiously negative for the Dow Jones. The Nasdaq is up on this day nearly 65% of the time. Also, the performance of the stock market after a negative or bearish first half of the year is resoundingly positive for a 6 to 12-month window going forward.

Ok, that is enough history out of the way, let us deal with the here and now and why this time it could be different. For starters, it is incredibly rare for both equities and bonds to be down quite so much after the first half of the year. The Fed continues to talk tough on rates but glowingly about the US economy. Are they trying to justify remaining aggressively hawkish for longer? Or are they misreading things again?

Reminder: the Fed said inflation was transitory and used that argument to keep rates too low for too long and continue pumping money into the system. It would not be a major surprise to see them now "think" the US economy is strong and keep hiking into the teeth of a recession. Call me a Fed basher, but they have a terrible record of over-loosening and over-tightening. We can see from the US data this morning that consumers are already beginning to scale back with consumer spending missing estimates. The US Consumer is the backbone of the US economy and also the stock market.

Certainly, the bond market remains increasingly convinced that the Fed will make a mess of things and send the US into recession in early 2023. The curve is flattening as 10-year bonds price in a recession. Wednesday saw more hawkish central bank speak, but the US 10-year yield actually declined despite this. Equity markets stayed relatively calm on Wednesday by comparison as end-of-quarter flows remain mildly supportive and general apathy is setting in before next quarter's earnings. Most are now betting that it will be a poor earnings season, and analysts will be forced to mark downward their S&P 500 forward earnings estimates from $250 to more like $225.

RH down on poor earnings and guidance. 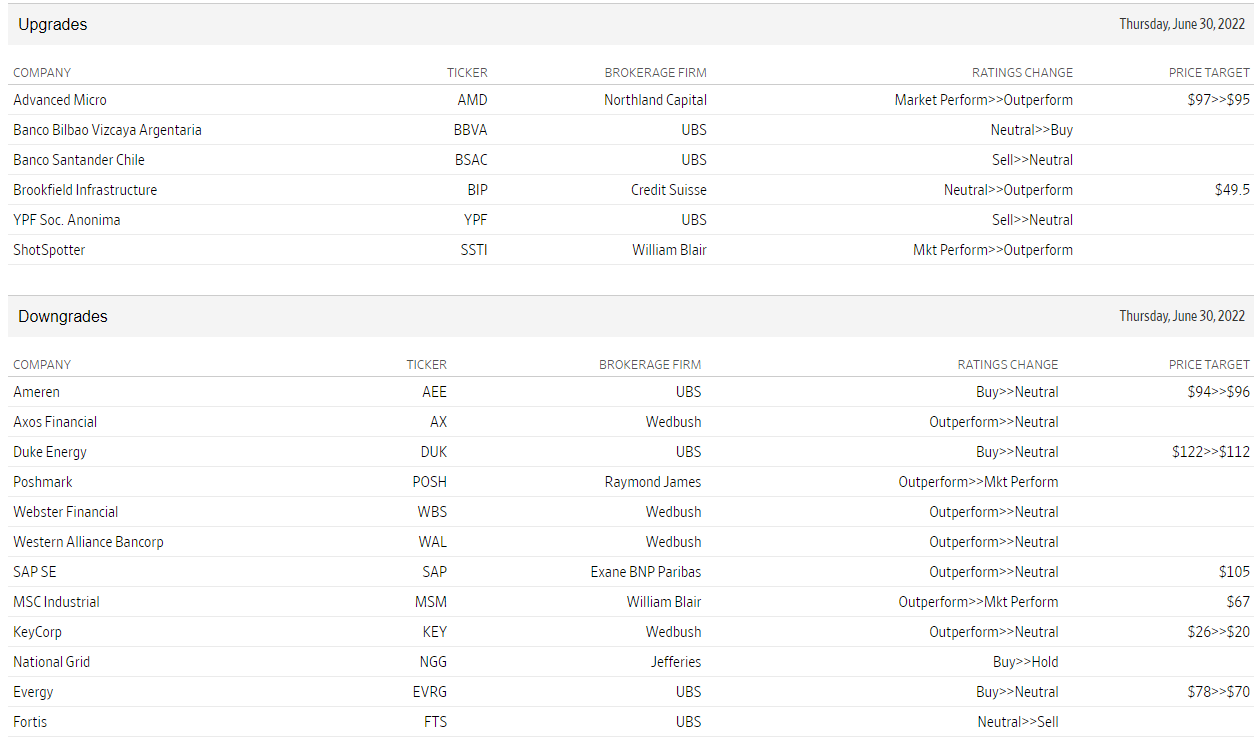