Here is what you need to know on Tuesday, June 23:

The Nasdaq led the way on Tuesday, registering a record high close as the big tech names geared up. As we at FXStreet have been mentioning, Apple (AAPL) has been awakening from its post-earnings slumber and broke out of the triangle formation yesterday, so could be set for further gains, see more. Records are made to be broken, but one record not being broken, according to Fed Chairman Powell, is the 1970s inflation record, as he once again gets all lovey-dovey on the wires. This has certainly helped calm any lingering market fears and set the scene for the rally to continue. Bond traders have decided to sign off for the summer early as the 10-year yield remains mired at 1.50% as a result.

The dollar finally gave up some ground after last week's taper tantrum. Powell helped it trade down to 1.1940 versus the euro. Oil moves ahead despite talk of an August OPEC+ supply boost to $73.40. Gold is at $1,782, and Bitcoin bounces to $34,000 as volatility returns to the crypto leader.

European markets are mixed with the FTSE +0.5%, but the EuroStoxx and Dax are both down 0.5%.

US futures are all flat.

GlaxoSmithKline (GSK) plans to spin out the consumer healthcare business.

Patterson Companies (PDCO): down 9% in premarket on Q4 EPS and guidance below estimates.

XPeng (XPEV) up 5% premarket as the company is reported to list in Hong Kong.

Shake Shack (SHAK) up 3% in premarket on talk of China expansion. 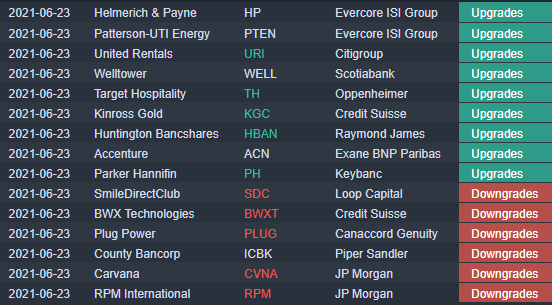 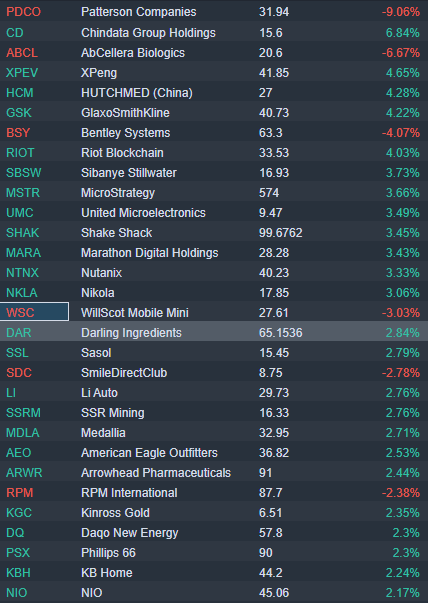