Here is what you need to know on Tuesday, June 22:

Monday provided an interesting before-and-after contrast as traders returned from lunch in bullish mood and lifted the major indices into positive territory. Maybe a lunchtime conference on "buy the dip" was held as this has been the theme of equity markets since the pandemic lows in March 2020. The move enables the key trend line support from October 2020 to be held for the S&P 500.

Bitcoin stocks however are not so fortunate with the sector set for further losses on Tuesday. The crypto leader is trading at $29,600, down 6%. Tesla (TSLA) has been struggling for momentum, and its bitcoin investment is likely to be seized upon by bears as it underperformed the market on Monday.

European markets are heading for flat territory, having been lower earlier in the session. The EuroStoxx is -0.3%, while the Dax and FTSE are flat.

US futures are mostly unchanged.

OPEC+ is thinking about increasing oil production from August onwards, according to sources.

Top White House officials are reportedly having talks on President Biden's infrastructure plan, according to Punchbowl.

The EU is to open an anti-trust probe into Google (GOOGL) as the EU is examining if Google favours its own online display ad services, according to CNBC.

Also, YouTube (GOOGL) gets a ruling from the top EU court that it should not be held liable for copyright infringing uploads in some cases. Platforms“do not, in principle, themselves make a communication to the public of copyright-protected content illegally posted online by users of those platforms,” the European Court of Justice said, but online platforms could be liable if it “has specific knowledge that protected content is available illegally on its platform and refrains from expeditiously deleting it or blocking access to it,” the ECJ said.

Sally Beauty (SBH) is certainly beautiful, according to Oppenheimer and Cowen & Co, who both upgraded the stock on Tuesday.

GameStop (GME) is up 7% premarket as it raises $1 billion through a share sale.

Target (TGT) plans to make 100% of its private-label goods environmentally sustainable by 2040, according to CNBC.

Corcept Therapeutics (CORT) down 18% premarket as the company stops enrollment in Reliant trial, saying "the apparent level of benefit does not justify its further study as a treatment for end-stage pancreatic cancer."

Splunk (SPLK) pops 8% in premarket on a $1 billion investment from Silver Lake.

PLUG Power revenue and earnings per share for Q1 came in below estimates. Conference call ongoing. 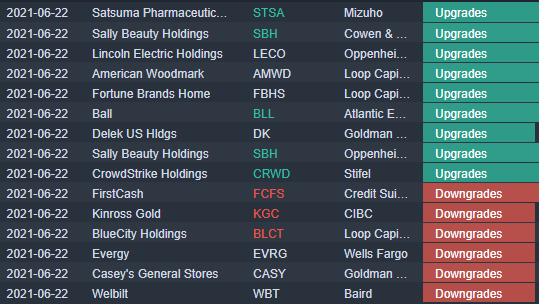 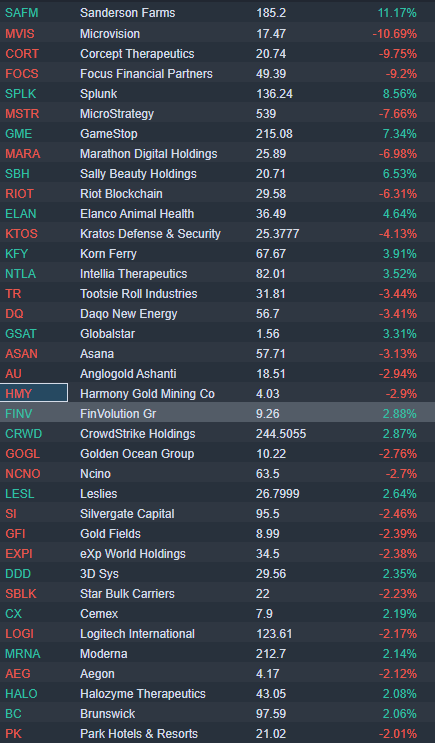