The latest news from Credit Suisse following the Archegos Capital liquidation incident is that it has once again sold its stocks related to the fund, with a total value of more than 2 billion US dollars, including as many as 14 million Vipshop stocks. In fact, since the news of Archegos’s liquidation was made public, many banks, such as Goldman Sachs, Morgan Stanley, Deutsche Bank, and Wells Fargo Bank have immediately forced liquidation of the company’s positions. According to Bloomberg’s estimates, the hedge fund’s liquidation may cause a loss of 100 billion US dollars, which means that there are more stocks to be sold. 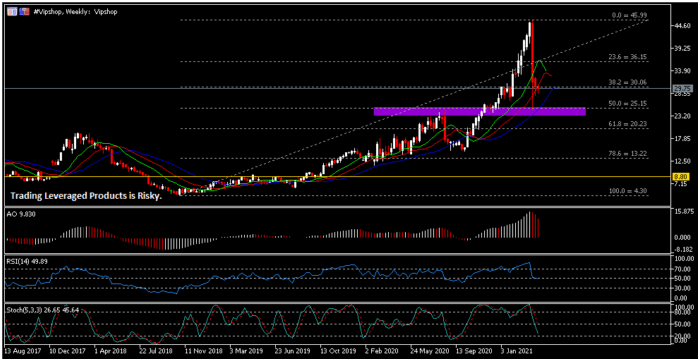 Vipshop is established in many places in China and mainly operates as an online shopping firm. The products sold on its website include clothing, cosmetics, daily necessities, toys, etc. After news of the Archegos crash broke, Vipshop’s stock price also gave up its gains over the past few weeks and fell to a low of US $24.75. On March 30, Vipshop announced the repurchase of 500 million US dollars of stock; however, this news only boosted the stock price to a maximum of $32.38 in the short term. As of yesterday’s close, the company’s stock price continues to be under pressure below the $30 level, at $29.75.

In the stock market, people often say “A bad week or two will not eliminate the long-term upward trend“, meaning that stock price is ultimately guided by the value of the company, and this value determines whether investors choose to continue to hold the company’s stock. Therefore, when the stock price plummets, such as in the case of Vipshop, we need to have a thorough understanding of the nature of the company before we can decide whether it is worth continuing to hold or establish a new position at a low price.

In the past year, Vipshop’s earnings per share and sales volume increased by 23.68% and 22.15% respectively. Effective merchandise sales and brand strategy, a solid supply chain network, the number of active customers and the growth of orders have provided favorable support for the company. In fact, the company’s sales and revenue growth in the past five years have both recorded a rise of more than 150%. This may reflect that Vipshop still has the potential for continuous growth.

Since the outbreak of the pandemic, most companies engaged in online businesses have benefited. A poll conducted by the Netcomm Suisse Observatory in Switzerland and the United Nations Conference on Trade and Development (UNCTAD) showed that out of the  227  Chinese consumers surveyed, 78% of respondents said they are now more inclined to online shopping. This ratio is significantly higher than the other 8 countries: 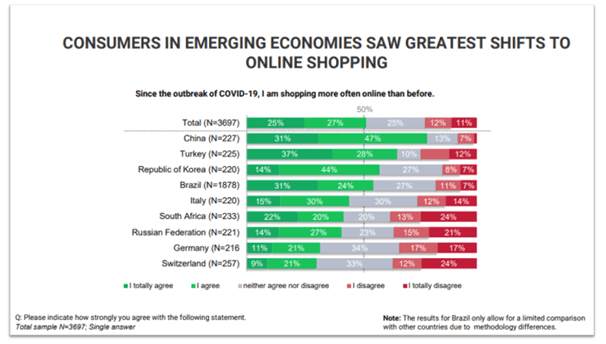 In addition, the survey also revealed the percentage of active online shoppers who make online purchases at least once every 2 months, as shown in Figure 2: 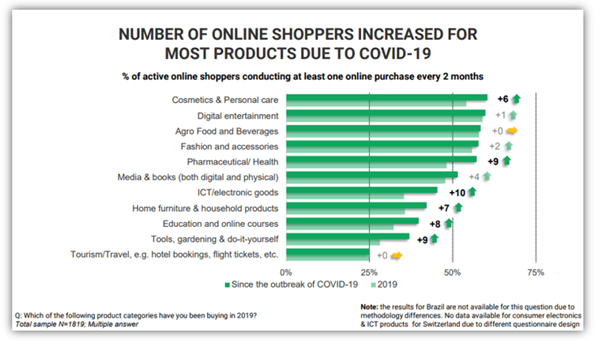 Data shows that during the pandemic, the number of people who bought cosmetics and personal care items online at least once every two months recorded an increase of 6%, while the number of people who bought clothing and accessories online recorded an increase of 2%. Although unfortunately the data has not been refined into the consumption ratio of different products in various countries, we can see from this that the pandemic has helped Vipshop, which mainly sells cosmetics and clothing. 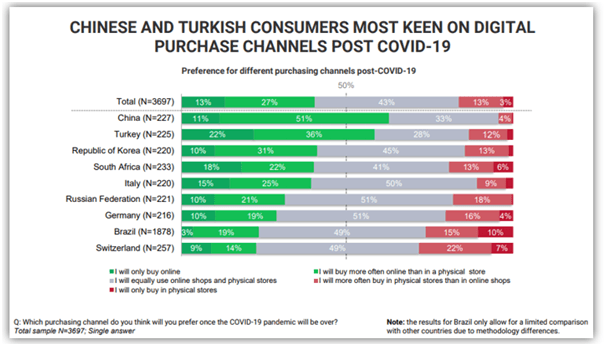 It is worth noting that among the Chinese consumers interviewed, 62% said they are more willing to continue shopping online after the pandemic is over, while less than 5% said they prefer to shop in physical stores.

Based on the above data, it’s good news for Vipshop, both during the pandemic and after it ends. Of course, we have to return to the fundamentals of the company in the end; as long as the company can maintain its core competitiveness, provide satisfactory services and retain customers, and even successfully develop a larger customer base, the company’s prospects will be positive. 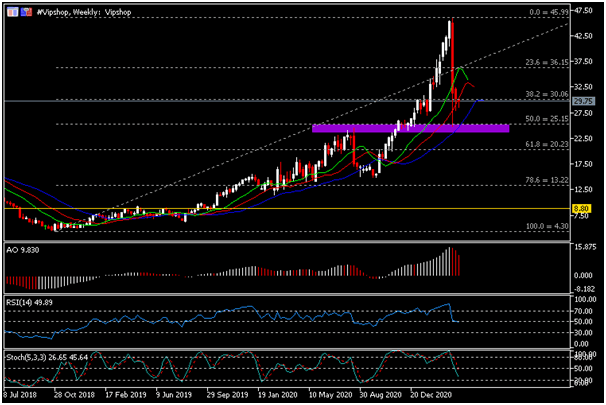 The weekly chart shows that #Vipshop’s share price has recorded a strong decline of more than 47% from its high of 45.99. It is currently trying to test and break through the key support of 30.00. At the same level, the teeth of the crocodile line (red) are also included. Although the indicator is long arranged, its green and red moving averages have turned downward. In addition, the AO indicator shows that the red column is gradually shrinking; the relative strength indicator (RSI) is at the 50 level and the Stochastics fast line is below the 50 level. 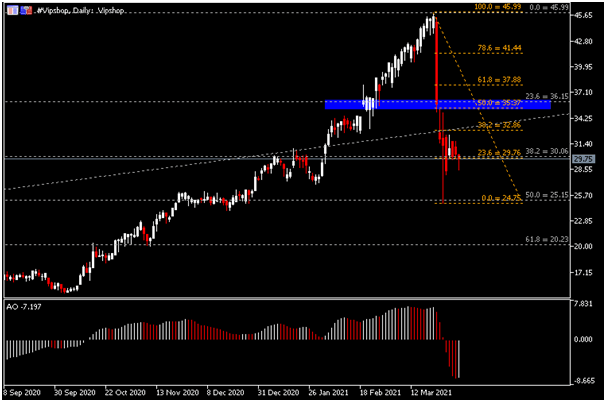