The USD/MXN pair dropped sharply on Friday and extended weekly losses, on the back of a weaker US Dollar across the board. From the level it had a week ago is 1% lower and on its way to the lowest weekly close in ten weeks.

Price yesterday broke below the 19.45/50 critical support and today it reached the next one at 19.30. It bottomed at 19.27 and quickly bounced back above 19.30. Near the end of the session it is hovering around 19.35, below the 20-week moving average that stands at 19.42. The weekly chart points to further losses but the 19.30 support should hold for the moment.

The sharp decline of the US Dollar amid risk appetite was the key factor behind the USD/MXN move. The improvement in market sentiment amid expectation about a deal between the US and China and also following the latest Brexit headlines triggered the demand for emerging-market currencies; among those, the South African Rand rose the most over the week.

“Markets were very volatile during the week, with investors focused on how U.S.-China trade talks and Brexit negotiations evolve. Market volatility (VIX) hit levels above 20 but retreated to 16 as optimism about a potential trade deal rose towards the end of the week. Increased prospects of a limited U.S.-China trade deal underpinned the risk-on mood, with equity indices rallying, led by cyclicals, while safe-haven assets declined”, explained BBVA analysts. 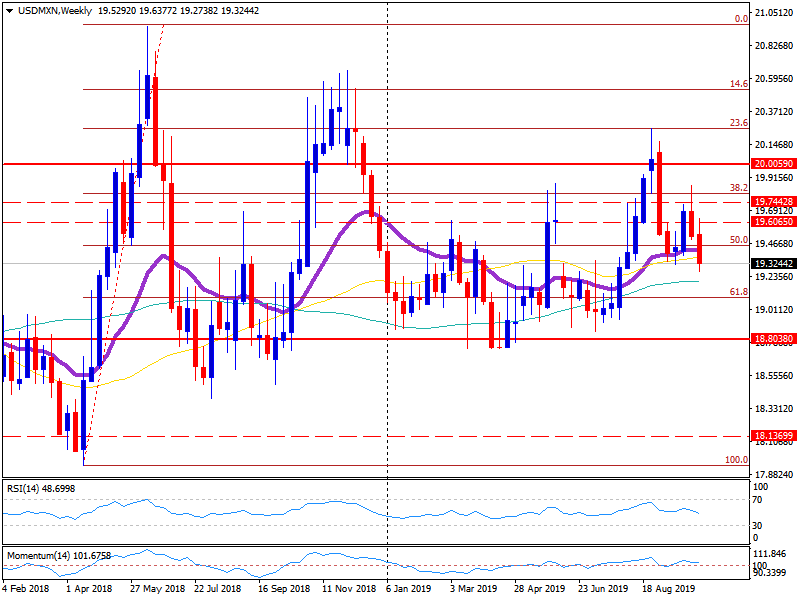