The corrective downside in US yields lends some buying interest to the Japanese yen and drags USD/JPY back below 109.00 the figure on Tuesday.

USD/JPY corrects lower following three daily advances in a row and slips back below the 109.00 hurdle after recently failing to extend the upside momentum further north of the 109.50 area, levels last visited in June 2020.

The steep climb of the pair follows the sharp increase in US yields seen in past weeks. Indeed, yields of the key US 10-year benchmark rose well past the 1.60% region earlier in the week. The last time these yields traded at that level was back in February last year. 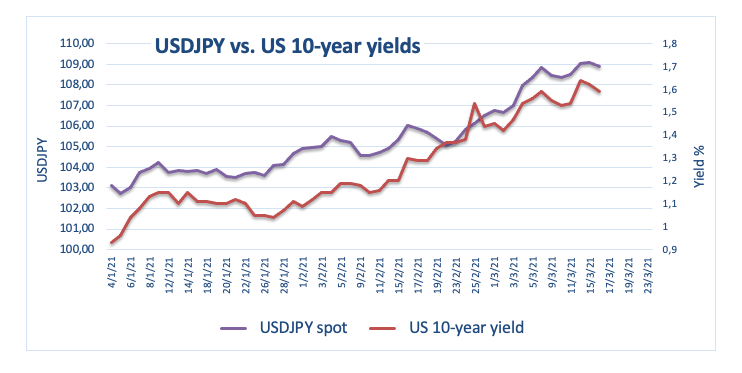 Later in the week, the Bank of Japan is seen keeping the monetary policy stance unchanged, although investors still have in mid a potential increase of the bond purchase programme later in the year, particularly if the growth prospects deteriorate in the wake of the pandemic.

What to look for around JPY

The yearly rally in USD/JPY navigates its third consecutive month, sharply bouncing off January’s lows in the vicinity of 102.50. The pair’s upside remains mainly sustained by the improved sentiment in US yields, which in turn appears underpinned by higher inflation expectations in the US. Furthermore, the mega-loose stance from the BoJ – which is seen in place for the foreseeable future - also collaborates with the softer yen, while speculative net longs in the safe haven have been scaled back strongly in past weeks.