The pair slipped from 110.58 the high on a soft US dollar ahead of the Federal Open Market Committee meeting this week.

At times like this, the bond market is often a reliable indicator of the market's sentiment. Given the drop in US nominal and real rates at the start of the week, investors are potentially weighing the spread of the delta coronavirus variant against prospects of stubbornly higher inflation.

''US 10-year real yields fell to a record low of -1.13% before recovering to -1.10%,'' analysts at Brown Brothers Harriman noted and argued ''the conflicting narratives will make the Fed’s job even trickier as it meets this week.''

''With inflation spiking beyond what we would consider transitory, we expect the Fed to continue tiptoeing down the path to tapering.  Yet it will be all the more difficult for Powell and Co. given the growing concerns about the economic outlook,'' the analysts explained.

However, the analysts argued that those concerns are overblown.

''While the recent rise in US infections is worrisome, the relatively high vaccination rates in the major economic centres of the country suggest that the risks to growth from potential lockdowns remains low, at least for now.''

Nevertheless, the dollar index DXY, which measures the currency against six major peers, slipped some 0.40% to 92.531 but was still close to last week's 3-1/2-month high of 93.194 and analysts expected that it will eventually test the March 31 high near 93.437.

The US dollar has gained nearly 4% since May 25 as an improving US economy bolstered the outlook for the Federal Reserve to start paring asset purchases as early as this year.

One could argue that the dollar has had a good run of late and is looking a bit rich against some of the currencies whose nation's central banks are more on the hawkish side.

With that being said, confirmation from the FOMC that it intends to make a taper announcement could serve to lift the US dollar immersed in the reality of US monetary policy divergence.

Significantly, a press conference by Chair Jerome Powell on Wednesday, where investors will be on the lookout for any comments on when tapering of the central bank's asset purchases could begin, might be a volatile affair.

On the other hand, a Goldilocks result for stocks, whereby the Fed acknowledges continuous economic improvements and a steady pace of recovery but is hesitant to taper in the face of the more contagious Delta coronavirus variant could adversely affect the greenback.

There has been a quadrupling of daily infections to levels approaching those seen in last summer's virus surge.

However, overall, the US dollar smile theory has so far been playing out regardless of the risks of the variant.

US dollar smile theory in play

That is to say that the US dollar will strengthen when the US economy is recovering and while the Fed is on the verge of tapering.

However, counter-intuitively, it will also rise due to risk-aversion despite the risks to the economy in the implications of the variant spreading. 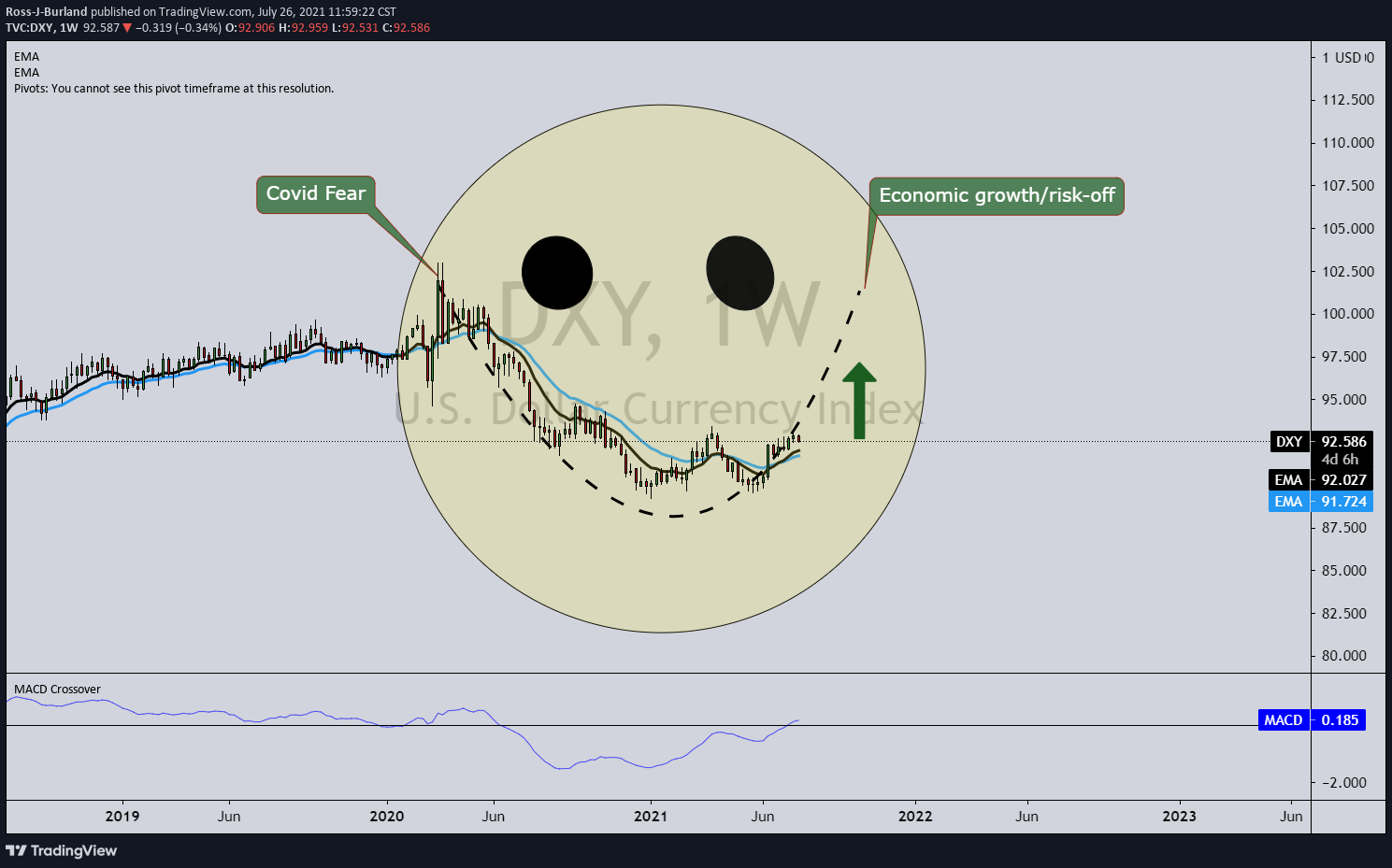 USD/JPY is trading lower after being unable to build on its recent gains to 110.60 last month.

Failures beyond the confluence with the 61.8% Fibonacci retracement of the weekly bullish correction at 110.68, there are prospects of a significant bearish extension.

Bears will be looking towards a test of the mid-July lows and 109 the figure.

EUR/USD seems to have found support near 1.1400 following Friday's decline. In the absence of high-tier macroeconomic data releases, the pair clings to modest daily gains on Monday. Bond and stock markets in the US will be closed due to the Martin Luther King Jr. Day holiday.

GBP/USD continues to move sideways below 1.3700

GBP/USD is moving up and down in a narrow channel below 1.3700 early Monday as investors await the next catalyst. The US Dollar Index is consolidating Friday's recovery gains above 95.00 as American investors enjoy a three-day weekend.

Gold fell sharply on surging US Treasury bond yields on Friday but seems to have started the new week on a firm footing. XAU/USD is trading modestly higher on a daily basis near $1,820 as the market action remains subdued on MLK Day.

Altcoins due for massive gains as BTC holds its ground

Bitcoin price reveals a bullish outlook albeit a slow one, providing altcoins with an opportunity to run free. The past week is a testament to the recent gains witnessed among many altcoins.