The US Dollar has been pressured this week leading into the key US data events on Thursday although subdued trading is expected form here as investors will be hesitant to make any moves into Thursday and next week's central bank meetings, including the Federal Reserve and the European Central Bank.  At the time of writing, DXY is trading down some 0.25% and has travelled between a high of 102.118 and a low of 101.576.

Key US data on the cards

Meanwhile, the US Commerce Department set to release its initial advance fourth-quarter Gross Domestic Product estimates at the same time that the nation's Core PCE prices will be due, likely accelerating to a 0.3% moM pace in December, though a 0.4% gain can't be discarded, analysts at TD Securities argued. ''The yoY rate likely slowed to 4.5%, suggesting prices continue to moderate but remain sticky at high levels,'' the analysts argued. In regards to the growth data, the analyst said, ''we also look for GDP growth to have stayed strong in Q4, posting another above-trend gain. Growth was likely supported by firm showings from the consumer and inventories.''

The markets are pricing in a dovish outcome for the months ahead with regard to the Federal Reserve. US stocks have benefitted as have high better currencies that are enjoying some of their domestic data points as well. The combined sentiment and convergence between the central banks have been pressuring the greenback lower in 2023.

Inflation measures have eased in the US but analysts at Brown Brothers Harriman noted that the labour market remains red hot. We will have the nonfarm Payrolls in the next several days also falling in at the start of each new month where the consensus sees 175k for January. ''While down from 223k in December, hiring remains firm,'' the analysts at BBH argued are arguing for a more hawkish longer outcome from the Federal Reserve.

''WIRP suggests a 25 bp hike on February 1 is fully priced in, with less than 5% odds of a larger 50 bp move.  Another 25 bp hike March 22 is about 80% priced in, while one last 25 bp hike in Q2 is only 35% priced in. We think these odds are too low,'' they said. ''Furthermore, the swaps market continues to price in an easing cycle by year-end and we just don’t see that happening.''

The US Dollar is likely to remain on the back foot until the market sentiment, if ever, switches back to a more hawkish Federal Reserve. This is what makes tomorrow's data so key. Any publication that points more towards 25 than towards 50bp on February 1 will likely be the nail in the coffin for the DXY index that is hanging over the edge of the abyss as the following technical analysis will illustrate. However, it might take a really outsized outcome in the data to really shift gears considering that the market has already lowered its expectations as regards the next rate step by the Fed. 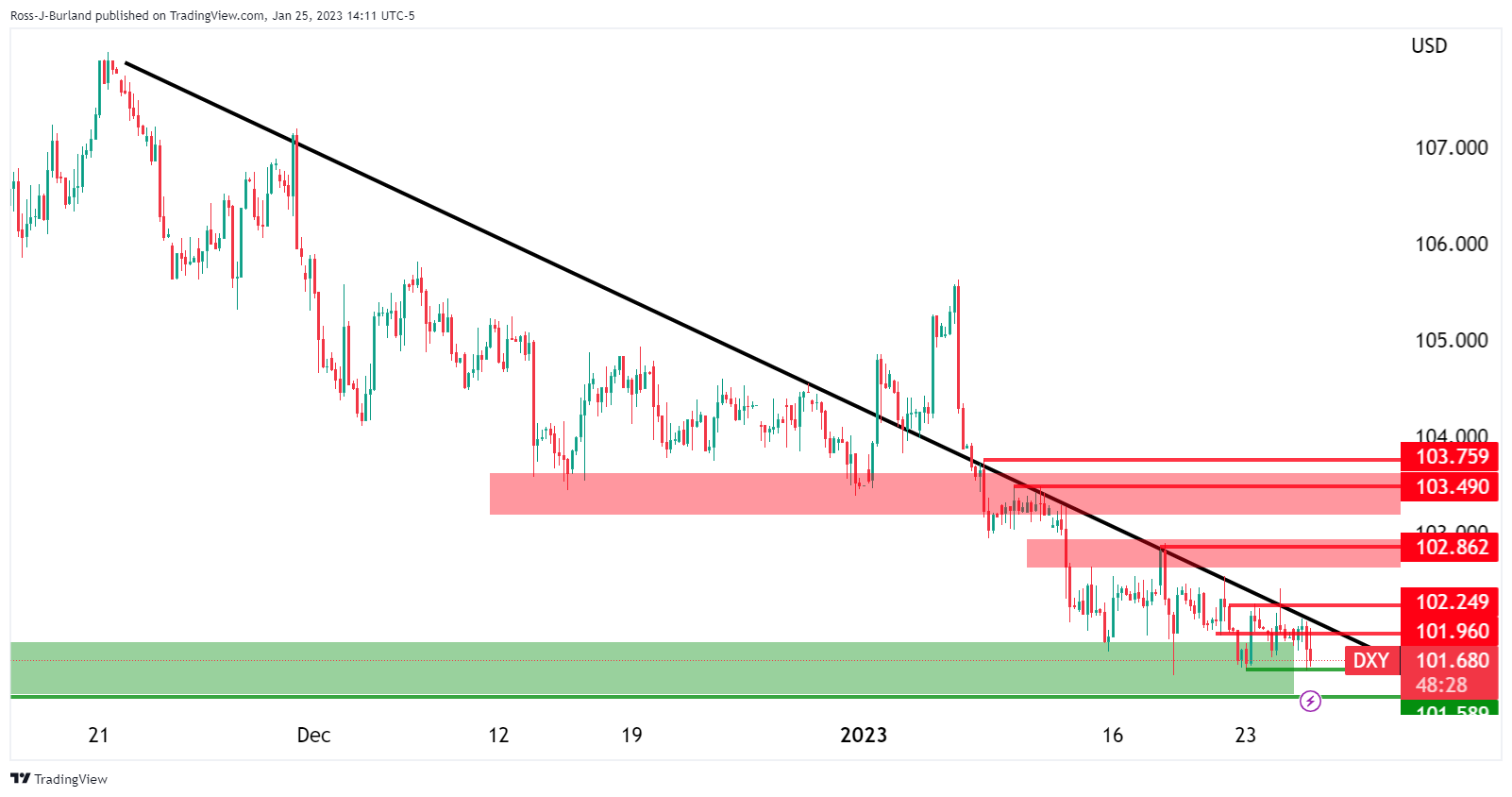 A move to test 100.00 coupled be in store around a dovish Fed. However, it is usual for markets to swing and the current support could be the fuel that is used to ignite a bullish correction and a test of prior supports as follows:

The weekly bearish impulse coupled come undone in the next days and lead to a bullish correction with the 38.2% Fibonacci eyed around 103.10.