Update: Tesla is continuing to trade exactly as we had been hoping with a move to take out the highs from the start of the wedge formation at $726.94 as the stock is up just under 1% in the first 30 minutes of the regular session on Friday. moving nicely and targetting our next resistance at $780. Volume thins out above $740 as we have been saying so get ready for a potential acceleration.

Tesla put in a nice day on Thursday, once again outperforming the general market as the electric vehicle sector leader popped over 2%. Tesla stock had been coiling and consolidating above $700 since it broke above that psychological level after a strong set of results. Tesla earnings were strong with a beat on the top and bottom lines. Adjusted earnings per share (EPS) came in at $1.45 versus the estimate from Wall Street analysts for $0.96. Sales came in at $11.96 billion, also beating the $11.21 billion estimate. Delivery numbers were high on investors' minds, and these too were ahead of estimates. Tesla delivered 201,304 vehicles in Q2 2021, an increase of 121% over the same period last year. Tesla said its average selling price had declined by 2% over the year, but its gross margin increased three percentage points from 25.4% to 28.4%. Jefferies liked what it saw in the numbers and increased its rating on the stock earlier this week, which gave Tesla stock a decent 2% gain on Monday. Since then it has been steady though until Thursday's breakout. We can see clearly on the chart below how Tesla stock consolidated above $700 after the strong earnings move. The stock then formed a bullish triangle/wedge continuation pattern, and Thursday has seen Tesla break out of this and prepare to test higher levels.

Now that the hard work has been done, it is up to Tesla stock to maintain the momentum and push on to the next big level at $780. Resistance based on the volume profile begins to thin out once we get above $740, meaning the move to $780 should begin to accelerate. Tesla remains above the 9-day moving average and the Relative Strength Index (RSI) and Commodity Channel Index (CCI) are all trending higher in line with price, confirming the move. There is a small resistance to get through at $726.94, which is the high from August 2 and the entry of the wedge/triangle. 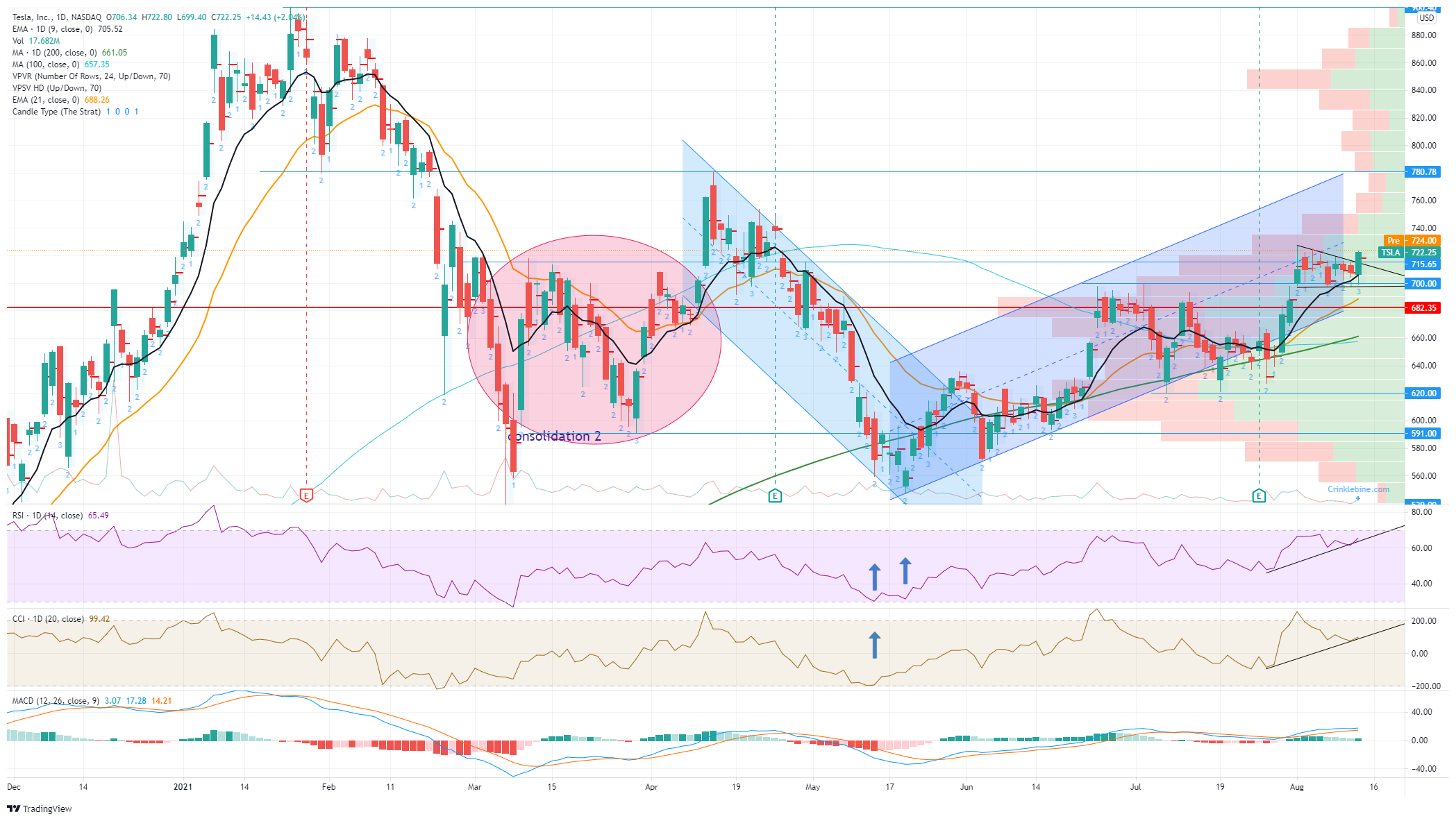