Tesla (TSLA) stock suffered badly on Monday with the stock closing at $686.17 for a drop of over 4%. In the process, Tesla broke some key levels, the most notable being the $697 triangle bottom and also the $700 psychological level. The catalyst was the announcement from the Nation Highway Traffic Safety Administration (NHTSA) that it will look into Tesla's autopilot system. Reuters reports that "U.S. auto safety regulators said Monday they had opened a formal safety probe into Tesla Inc's (TSLA) driver assistance system Autopilot after a series of crashes involving emergency vehicles."

The NHTSA said that since January 2018, there were 11 crashes where Tesla models "encountered first responder scenes and subsequently struck one or more vehicles involved with those scenes." The New York Times reports that the NHTSA could trigger a recall or demand additional safety features. The stock reacted badly, falling sharply straight from the opening bell and never recovering.

Monday's move saw Tesla stock break lower out of what had appeared to be a nice bullish continuation triangle. Now the move from late last week looks more like a false breakout. Tesla stock has at least remained in the uptrend channel, which has been in place since the middle of May. Monday's sell-off stopped at the bottom of the channel, $677, so that is the first support level. $680 is the point of control going back to nearly January, which makes it a strong support zone. The 200-day moving average at $662 will be the next support if that zone breaks, and below that support is at $620.

Tesla just about remains bullish in the medium term time frame due to the fact it is still in the uptrend channel and it has not broken the last series of lows in the trend at $620. But short term, the trend is neutral with the 9-day and 21-day moving averages broken on Monday. Getting back above these levels is the first sign of recovery. Otherwise it is more chop and sideways trading. This type of market is extemely difficult to trade, so please use good risk management and stops. 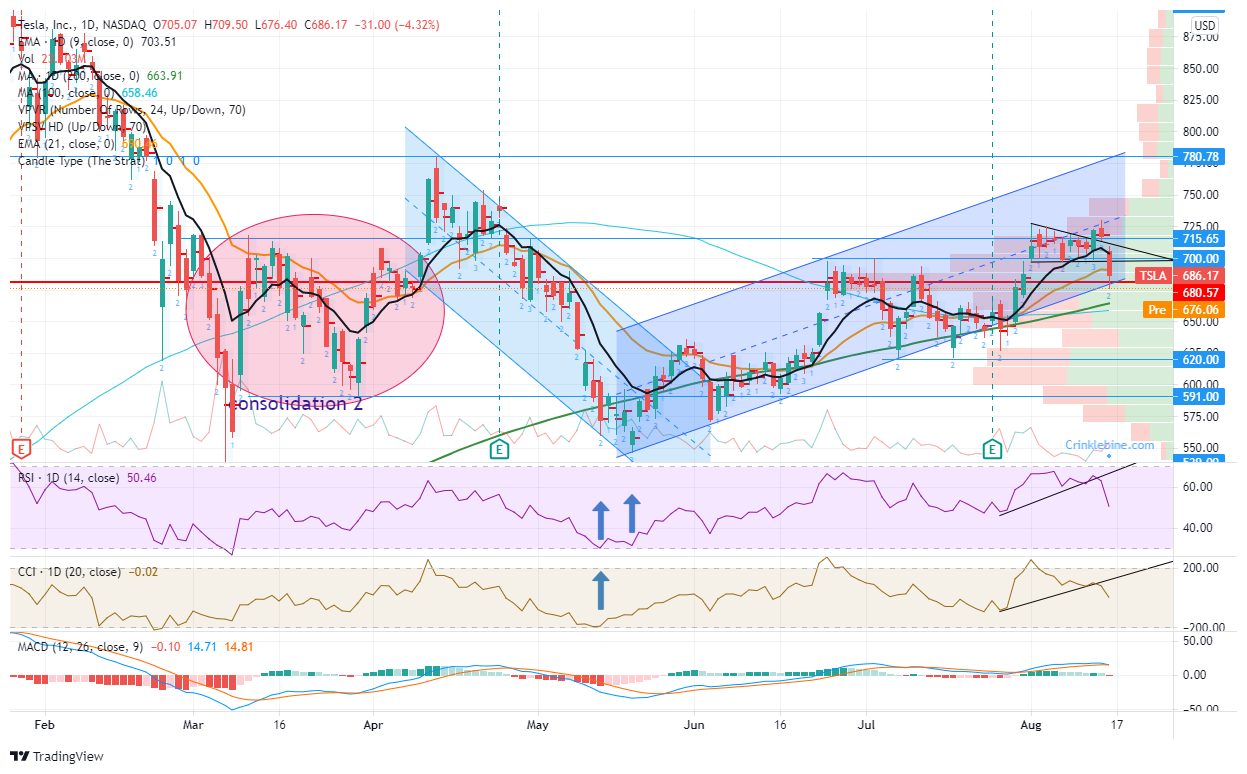