The stock market has begun to bottom out, according to some analysts, and certainly risk appetites have returned this past week. Earnings season is up and running without too many surprises just yet but with the caveat of the big dogs of tech reporting next week in a make-or-break season. In a curious framing of narrative, equity markets are recovering as hopes for a recession increase. This is a counterintuitive argument, but so much of equity performance has been tied to low rates this past decade that investors are addicted to free money. The sudden shock of rising rates was unfamiliar territory and caused a sharp sell-off, especially in risk-sensitive names that usually include tech and the Nasdaq. Now hopes for a recession have seen 10-year yields penciled lower. Lower rates mean the TINA trade (there is no alternative) would be back on in favor of equities despite a recession.

So there you have it: a counter-intuitive rally. It is also helping that so far earnings season is relatively upbeat. Tesla (TSLA) last night beat on EPS and was only marginally behind on revenues. There were some caveats, notably margin compression and a Bitcoin sale, but overall with some huge headwinds from China lockdowns and supply issues the growth rate is still impressive. We will update our deep dive Tesla analysis shortly, so keep an eye out. Economically speaking it appears as though the US housing market is about to roll over. No surprise really as house prices had surged to records both in nominal terms and in wage multiples. With rising rates and thus mortgages, it was not surprising that demand would fall just as inventories have been rising in response to rising prices. A classic Econ 101 lesson: rising prices increase supply and dampen demand.

The question remains though is this a bottom or a bear market rally. Certainly, short covering is outperforming long-only names. This leads us to believe it is early. Short covering ahead of earnings season is there, but there is no correlation yet from long-only buying.

The stock market bounce has been supported by short covering. pic.twitter.com/Rv1IY0D1F8

If earnings season goes some way better than expected, then we would expect the rally to broaden and continue. But earnings estimates are moving in the opposite direction.

The aggregated earnings outlook looks steady but, under the hood, estimates are eroding. Here we see the percentage of companies in the S&P 500 with rising estimates from three months ago. There clearly is slippage here. pic.twitter.com/LJ5Fea3WhX

This largely explains why the market is so choppy, and when you add in the clouded interest rate outlook, we are definitely in choppy waters.

We have reached our first target and resistance at $395 and now have to fill the gap to $401. After that, it is on to resistance at $415 and a much strong resistance level. Tuesday was a high volume day and market breadth was strong with nearly 90% of NYSE-listed stocks closing higher. 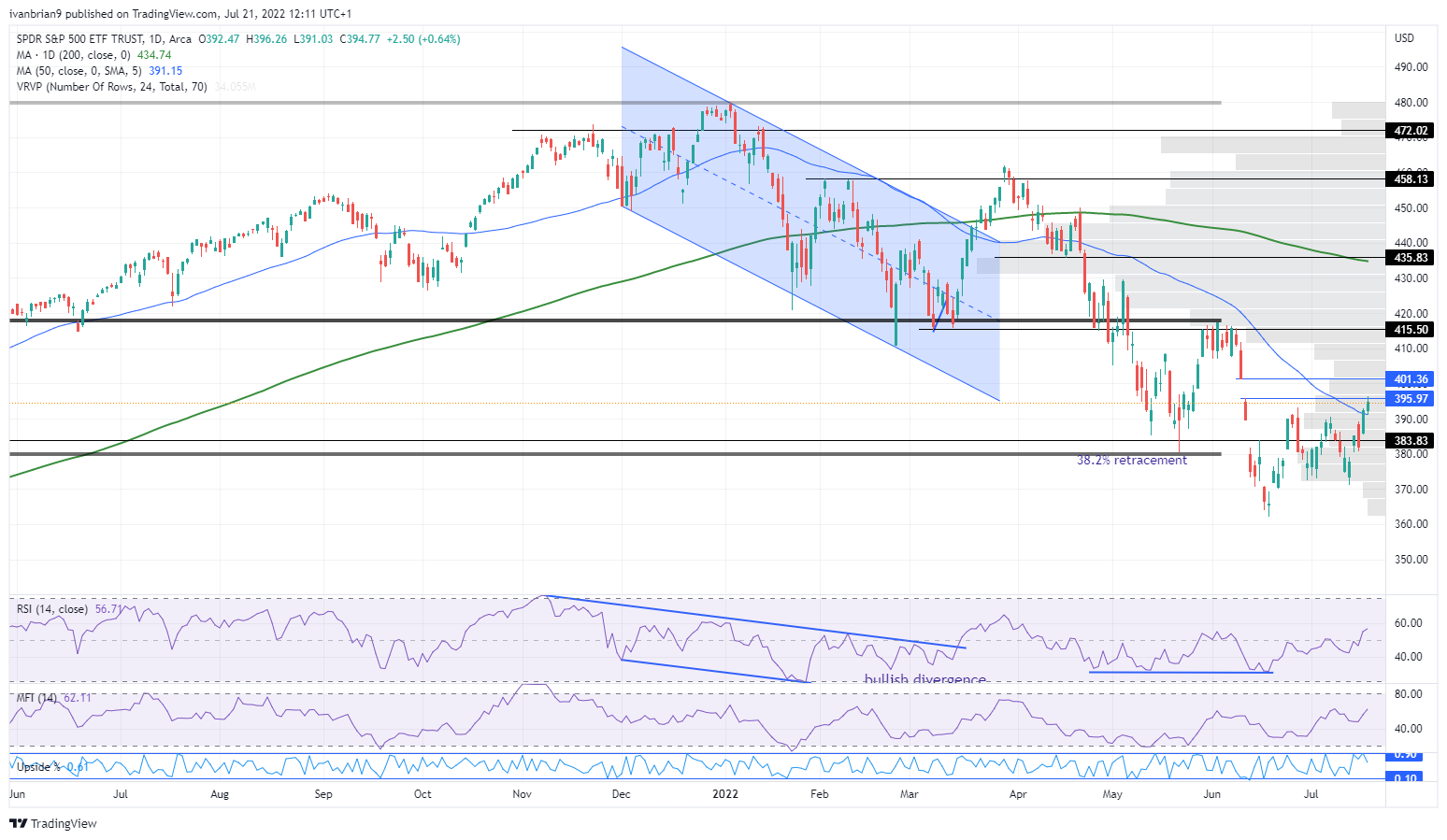