Silver (XAG/USD) extended its rally in the North American session, trading above the April 11 cycle high of $25.37, amid a mixed market mood, courtesy of the Russian-Ukraine crisis, hotter than expected US inflation, and China’s coronavirus outbreak. XAG/USD is trading at $25.58.

Global equities are trading mixed, with European bourses down while their US counterparts rise. Overnight, Ukrainian President Zelenskyy reported that Russia could make use of chemical weapons, while the US Pentagon Press Secretary Kirby said that the US is aware of this but it would continue to monitor the situation. On the Russian side, President Vladimir Putin said that there is no doubt that the military operation in Ukraine will achieve its objectives. Furthermore, earlier in the North American session, Russian President Putin added that talks with Ukraine are at a dead end.

Aside from this, the US economic docket reported US inflation for March. The headline figure rose by 8.5% y/y, higher than the 8.4% estimated by analysts, while the so-called Core CPI, which excludes volatile items, expanded by 6.5%, lower than the 6.7% foreseen

The market’s initial reaction was that the greenback fell below the 100.000 mark, while US Treasuries edged lower as investors assessed that March’s reading could be the peak of US inflation.

Silver’s 1-hour chart bias is aligned with the daily chart, and the uptrend is intact. The price action of the last two candlesticks shows that the rally is overextended, further confirmed by the Relative Strength Index (RSI) at 67.92, close to reaching overbought conditions.

Upwards, the XAG/USD first resistance would be the confluence of the March 24 cycle high and the R2 pivot point around the $25.75-85 range. A breach of the latter would expose the psychological $26.00 mark, followed by the R3 pivot at $26.12. 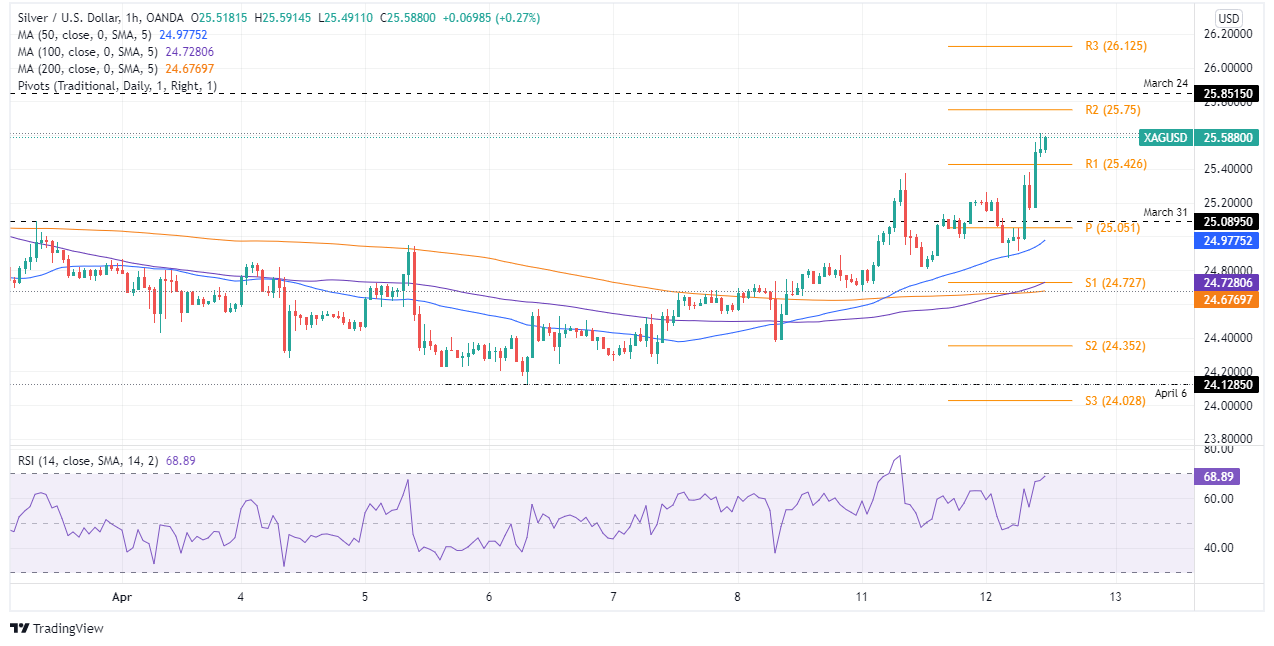