Rivian (RIVN) is certainly the stock of the week, if not the month. We cannot quite put it as a contender for stock of the year. The AMC apes and Gamestop gamblers would not stand for it!

The huge IPO, the fifth biggest in US history, does make one extra vigilant about the state of the bubble in this market right now. This valuation looks way too high in our view. Rivian is worth more than General Motors (GM), Ford (F), Honda, BMW, and a few others. Ford sells nearly 5 million cars a year, while Rivian has orders for about 55k, which it hopes to fill by 2023, and for 100k vans for Amazon, which it hopes to fill by 2025.

Remember, Warren Buffet is long cash, his longest cash position in years. He is waiting and watching. He is usually right, even if it takes a few years. That is an argument for a different forum. Trading is not the same as investing. It is about momentum, swings and trends – strong risk management too. Rivian certainly has volatility and volume, two things most in desire from today's retail trader.

Let us do a quick recap in case you have just landed from Mars. Rivian is an electric vehicle manufacturer. Instead of cars, it focuses on trucks, SUVs and delivery vans. It was and still is backed by Amazon (AMZN) and Ford (F). Amazon has ordered 100,000 vans, which Rivian hopes to fill by 2025. The company was initially supposed to IPO around $60. This was then increased to $73 after a strong investor roadshow (sales round).

Eventually, demand was so high it launched on the Nasdaq at $78 on Wednesday. However retail loves the EV space, so they were chasing the listing. RIVN eventually opened at $106.75 for its first trade on Wednesday and steadily pushed higher. Yesterday saw that move continue as Rivian (RIVN) shares traded up to $125 and closed up 22% on the session. Volume is still huge, and the stock is trending all over mainstream and social media.

Elon Musk added his opinion on Twitter, saying, "There have been hundreds of automotive startups, both electric and combustion, but Tesla is (the) only American carmaker to reach high volume production & positive cash flow in past 100 years."

The chart is still in its infancy really to be identifying any strong levels, but there are some points to note. The point of control is still much lower at $99.98, due mostly to the closing auction volume on Wednesday. The Volume-Weighted Average Price (VWAP) for Rivian (RIVN) is $111.55. This makes the main two volume equilibrium points much lower.

We also pointed out yesterday that buying just at the point of IPO is when the feeding frenzy is at its greatest and everyone wants a piece of the action. There are many examples of IPOs surging in the days after listing before sliding back lower as interest wanes. It happened with Facebook, LinkedIn and even Roblox this year and is worth bearing in mind. 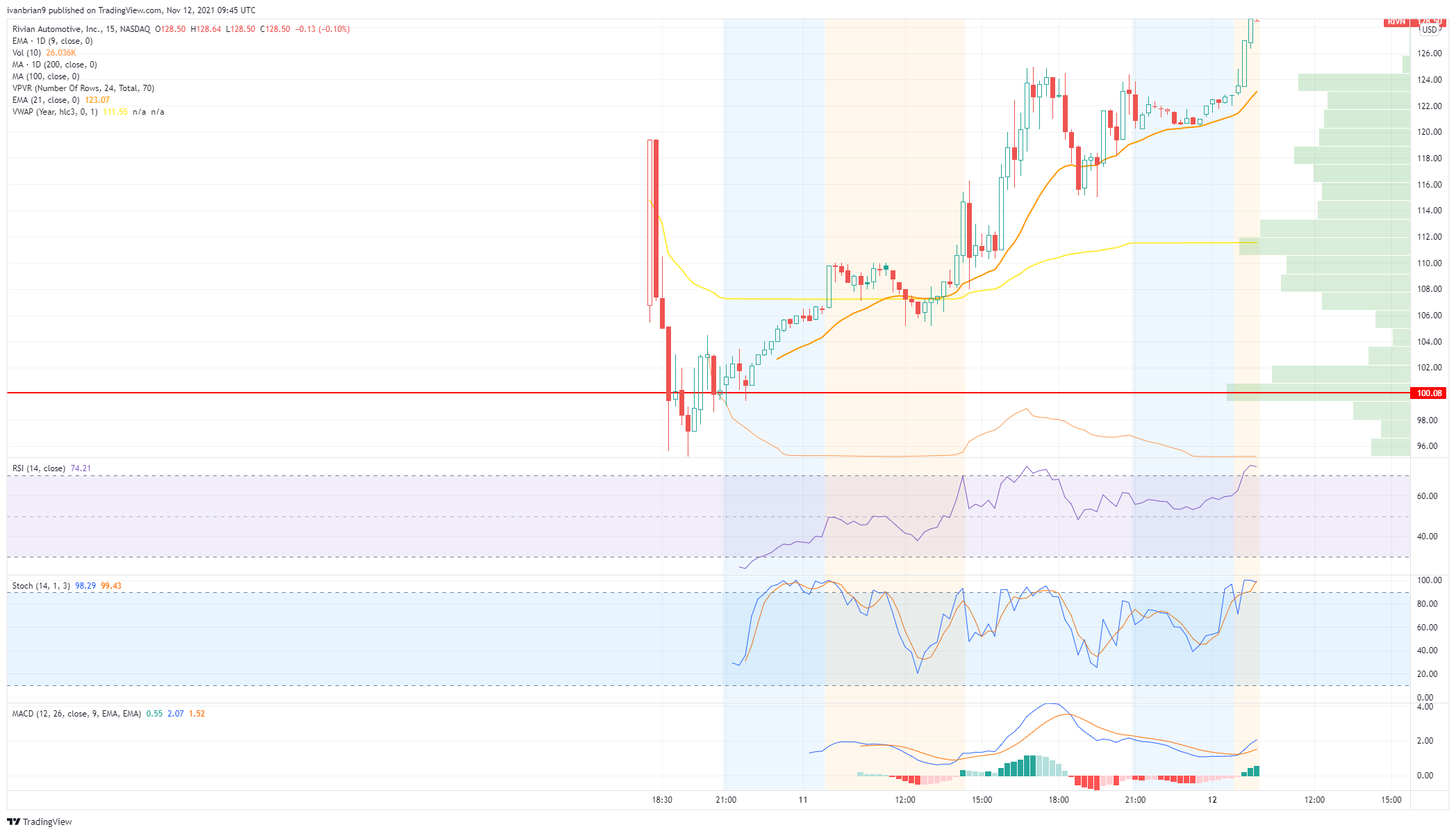