UPDATE: Chicken Soup (CSSE) for the Soul has officially completed its acquisition of Redbox (RDBX). Chicken Soup shares are ahead more than 5% and as high as $15.59 on the news. The merger went through as planned by bestowing Redbox shareholders with 8.7% of a Chicken Soup share for each share of Redbox they previously owned. CSSE shares have been volatile with the stock waxing and waning between a low of $13.88 and a high of $15.59. In a statement on Thursday, Chicken Soup for the Soul said, "The combined companies now offer ad-supported video on demand (AVOD), over 145 free ad-supported streaming television (FAST) channels, transactional video on demand (TVOD), and a network of over 36,000 kiosks nationwide, all supported by original film and television production and distribution divisions. The company expects revenue to more than triple through this acquisition to approximately $500 million annually."

Well, that marked one of the most bizarre trades of recent times, and this era is not without a strong list of candidates for that title. However, this one takes the biscuit and highlights the pump-and-dump nature of social media and the resultant pitfalls. Redbox (RDBX) is a legacy DVD business that operates those rental kiosks you see at the local store. Like me, you probably walk by and wonder who uses those things. Not too many people is the answer as Redbox was in serious trouble financially. There has never been any uncertainty in what Chicken Soup for the Soul (CSSE) even sees in the business that it is acquiring.

Chicken Soup for the Soul announced it was going to take Redbox out of its misery a few months back in a deal worth around $0.51 per share at the time it was announced. Chicken Soup for the Soul shareholders did not see the promise in buying a broken DVD lender either and dumped CSSE stock by 30% on the announcement. It was the performance of RDBX stock that caught my attention though. Retail armies mobilized and saw that it was a low-float, massively-shorted name and began an epic and frankly stupid squeeze. From being worth around $0.51 in a deal that was already majority approved, RDBX stock was squeezed up to $18!

Back around that crazy time in mid-June, we cautioned that it would all crash and burn, and that is what has come to pass. FXStreet: "However, it will not last, so please be advised to head for the exits and take your profits...There is not much to say here except that this will run out of steam fairly soon, and I am tempted to short it or buy some puts quickly."

Thankfully, I took my advice to buy puts despite the high volatility. Most brokers were not allowing you to short the stock. This resulted in a 5,400% gain – my most profitable trade ever. If you like analysis such as this, check out our premium service where some of our top analysts go through FX and other markets.

By contrast with RDBX, CSSE stock soared nearly 30% on Wednesday. It looks like the retail fizz may have just spread over to the new company. Nothing else can be attributed to the gain, so this looks like another opportunity to short. Mentions of both RDBX and CSSE spiked on social media, which is usually a sign of another pump. As always, watch out for the dump then. It may take a few days though as risk is back in the equity market following Wednesday's CPI-led rally. Watch for tell-tale risk-off signs such as a high open and much lower close that indicates a stall in momentum. 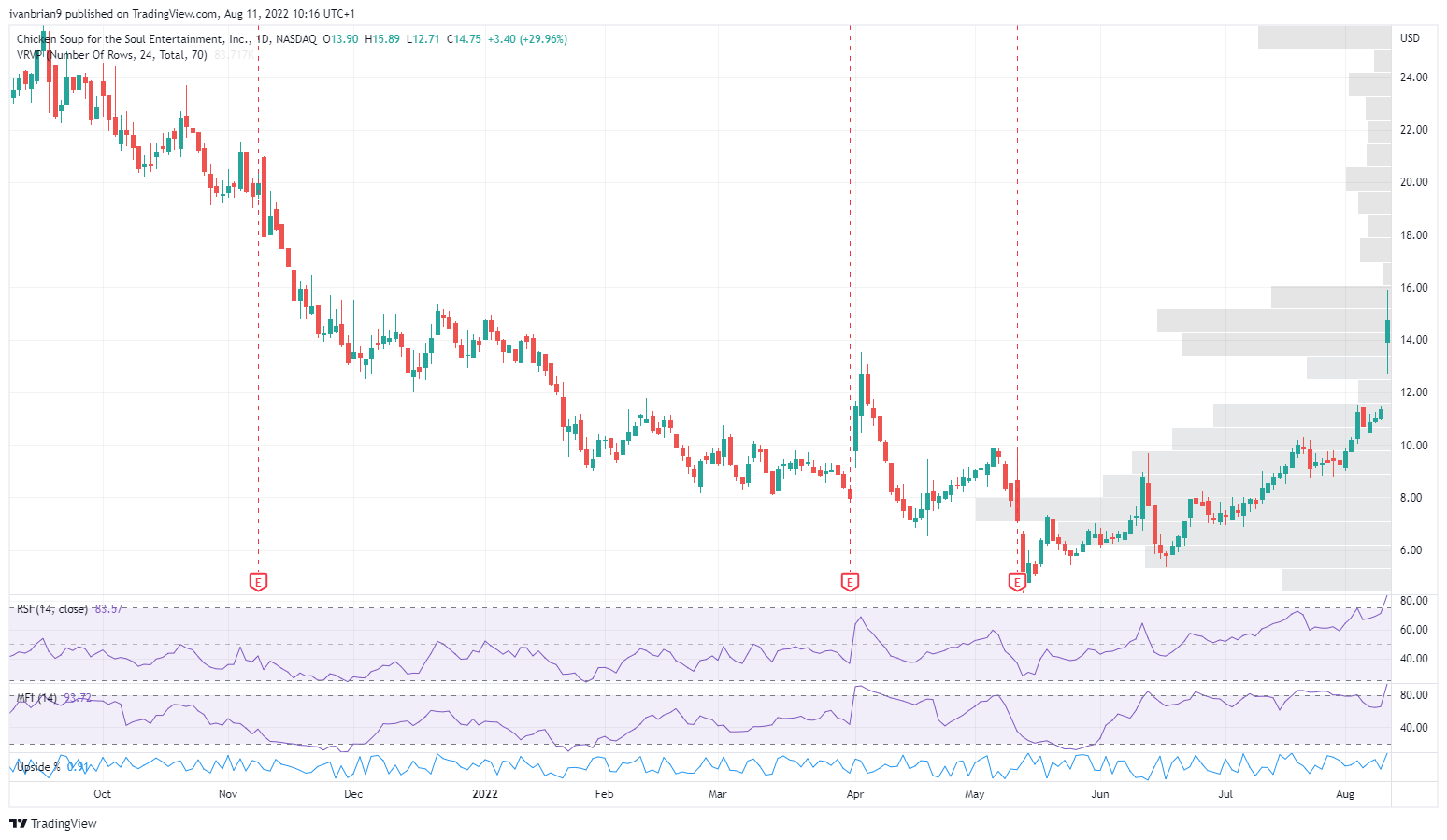 Redbox is now over, gone. The deal is due to close today, and RDBX will be no more. RDBX shares were suspended late yesterday on the deal and will convert into CSSE stock. For every one share of Redbox (RDBX) held, shareholders are to receive 0.087 of CSSE stock. Based on CSSE closing Wednesday at $14.75, that values the last RDBX shares at $1.28. 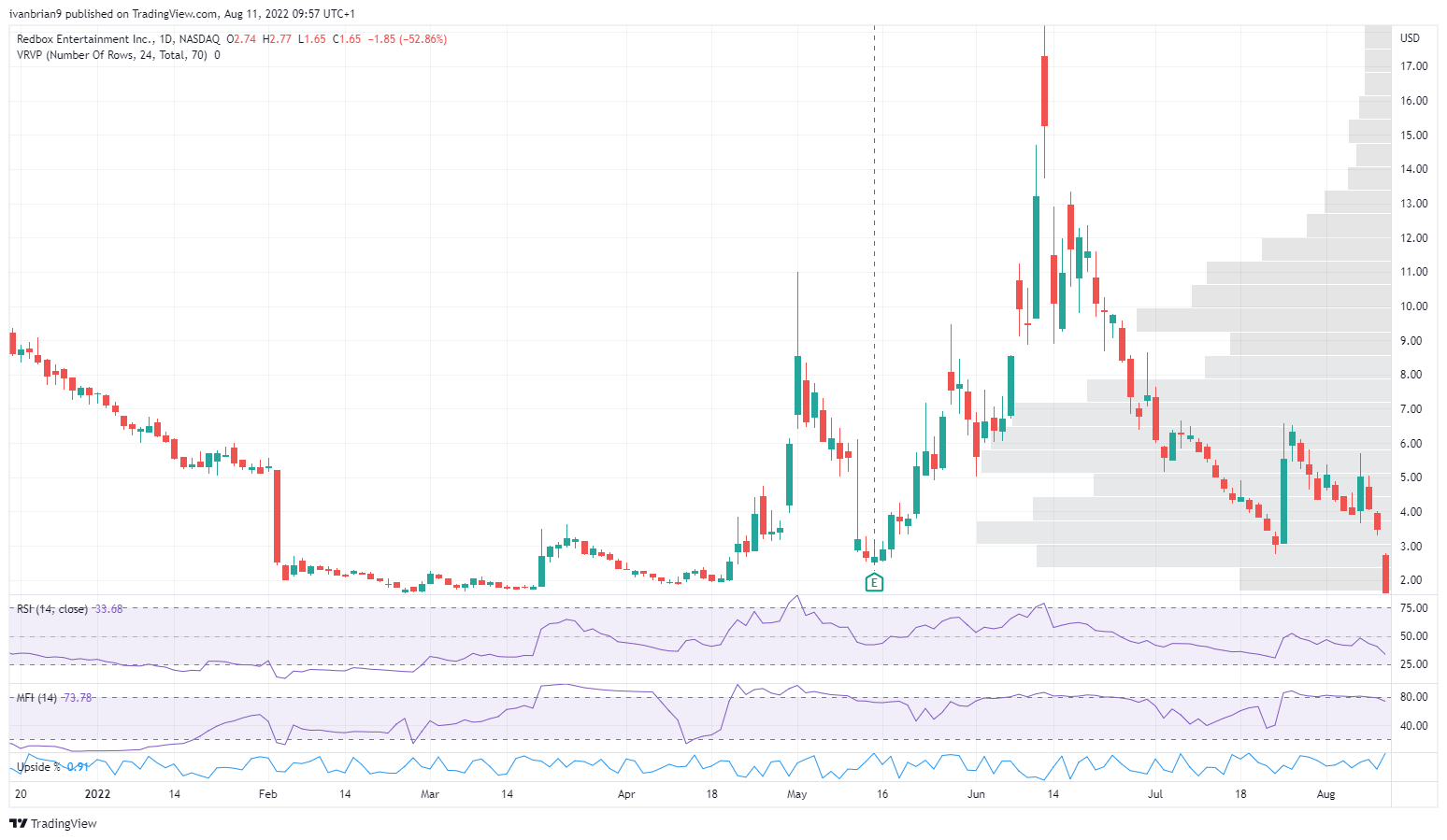