NYSE:PFE has not performed as one would imagine a stock would after announcing a high efficacy rate for one of the most important vaccines in our lifetime. The stock has traded down since the announcement on November 9th, and despite an initial pop shortly afterwards, shares have lost 5% since. On Tuesday, the stock gained a meager 0.22% to close the trading session at $36.60. Pfizer’s partner BioNTech (NASDAQ:BNTX) has experienced an even lower drop as the German biotech firm has seen its stock fall by 11% since the vaccine was announced.

Just as the news of Pfizer providing its first 6.4 million doses by mid-December was released, several other biotech players entered the COVID-19 vaccine discussion. British giant AstraZeneca (NASDAQ:AZN) reported that it is awaiting the final results of its late-stage clinical trials, and could potentially be able to provide limited quantities of its vaccine candidate by the end of the year. Regeneron Pharmaceuticals Inc (NASDAQ:REGN) also entered the fray as its antibody cocktail, made famous by President Trump, was granted EUA or emergency use authorization by the FDA. 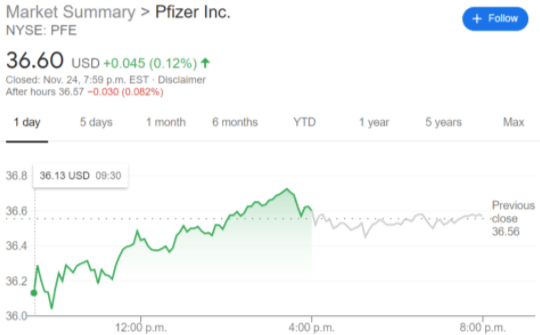 We knew that Pfizer would not be the only dog in this fight, but thus far, the New York-based pharmaceutical titan has proven to have the highest efficacy rate in its proposed vaccine. What does this mean for Pfizer’s stock? It should remain steady in the meantime as even world-changing announcements have little effect on its price. With a solid dividend yield of 4.16%, it would not be the worst idea to take a small position in Pfizer, as it could be in for a profitable 2021.