Operation Warp Speed and the race for a coronavirus vaccine has been a focal point for the entire world as we approach the first year anniversary of the virus’ initial spread. It has also grabbed the attention of investors who have been trying all year to anticipate which biotech or pharmaceutical company to buy shares of. Novavax (NASDAQ:NVAX) investors have been on a wild ride this year with the 52-week range starting at $3.54 and rising as high as $189.40. The news of rival AstraZeneca (NYSE:AZN) temporarily halting its phase three trials combined with positive results from Novavax’s own trials has caused the stock to spike another 25% over the past week.

Novavax still lags behind some of its competitors like the aforementioned AstraZeneca, as well as Moderna (NASDAQ:MRNA) and Pfizer (NYSE:PFE) who are all either about to start or are into phase three of their respective clinical trials. The Maryland based firm may have to settle for being a supplier of a second wave of vaccines – even though it does already have established contracts to provide vaccines to several countries around the world. 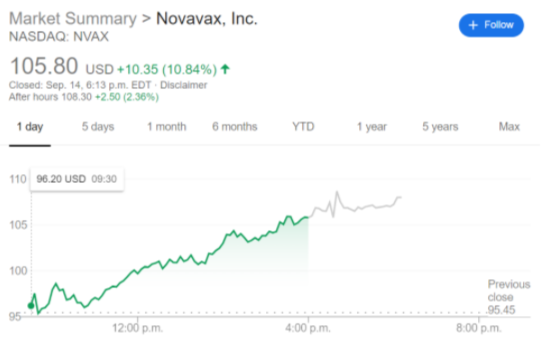 Where the stock goes from here is anyone’s guess. The volatility of biotech stocks fluctuates as soon as any positive or negative trial results are issued. One saving grace for Novavax is that it does have other products it is working on that can act as additional revenue streams for the future. NanoFlu, a flu vaccine, is a potential boon for the over 65 population that is hardest hit by seasonal viruses. Novavax will have to prove that its COVID-19 vaccine has the efficacy results to be mentioned alongside the other biotech heavy hitters – if they can, the stock could see another rise up to its previously lofty levels.