NYSE:NIO has finally had a red day to end the week as the stock fell 2.67% to close at $21.18, which means that the price still rose by nearly 12% since the week opened. It has been a profitable week for NIO investors who have to be optimistic from the recent analyst upgrades and sales growth reports. Shares are now up over 1,240% for the year which has outpaced the S&P 500’s gains of 14.53%.

On Friday, NIO reported 4,708 deliveries in the month of September which represents a 133% sales growth over the same month in 2019. The China-based electric vehicle maker also announced a 154% increase in vehicle deliveries for the quarter ending in September, and a key catalyst of this deliveries increase was the debut of Nio’s newest vehicle, EC6 SUV, which began to ship in late September. Domestic rival Li Auto Inc. (NASDAQ:LI) also reported an increase in vehicle deliveries over the same time period, as the Chinese government raises its incentives to citizens for purchasing electric vehicles. The pressure from the Chinese companies even forced Tesla (NASDAQ:TSLA) to lower the prices of its Model 3 vehicles that are made at the Shanghai GigaFactory. 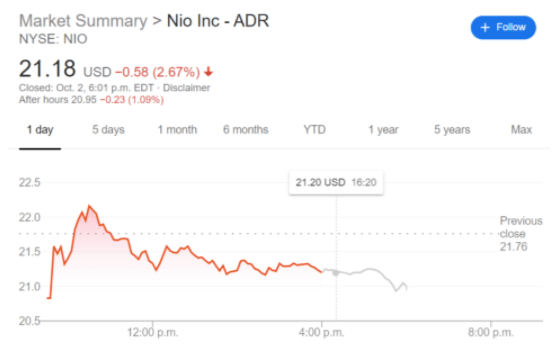 NIO’s outlook still looks incredible as Wall Street analysts foresee massive upside with the stock over the next twelve months. The sales forecasts are nice and on a day where the broader markets were trending downwards, especially from other industry rivals like Tesla (NASDAQ:TSLA) which dropped a whopping 7% on Friday despite reporting its own increase in vehicle deliveries. Investors should just treat this as a momentary dip as NIO seems to be positioned to emerge as the leader amongst Chinese domestic electric vehicle makers.