Update Friday, August 13: NIO stock fell for the third straight on Thursday, reaching the lowest levels in eleven days at $41.55 before recovering to $42.47 at the close. Despite the rebound, NIO shares lost 3.41% on the day. NIO stock traders ‘sold the fact’ on stellar Q2 earnings. Meanwhile, Fed’s tapering expectations resurfaced on hotter US PPI figure, which could have added to the stock’s downside. Widening Chinese regulatory crackdown also added to the weakness in NIO, as investors ignored the record close on Wall Street indices.

NIO stock posted results late on Thursday which was comfortably ahead of analyst expectations. NIO announced Earnings Per Share (EPS) for Q2 of -$0.03 versus the expectations for a -$0.11 results. Revenue was also ahead of forecasts coming in at $1.304 billion versus the $1.298 billion estimate. NIO also guided Q3 sales estimates higher than previous estimates. The results were strong but sales growth slowed month on month and that is why the shares have not pushed ahead in the premarket trading. NIO delivered 7931 cars in July down about 2% from June. The CEO did comment on supply chain issues saying the company was working with its partners to solve them. The stock is currently trading at $43.68 down 0.7% in Thursday's premarket.

NIO shares shed some recent gains on Tuesday with the stock closing down just over 2%. NIO is still stuck in a range trading zone with little direction evident. Perhaps results later on Wednesday can help give the stock some direction. NIO has been struggling since the whole China data crackdown affair escalated, with many Chinese stocks caught in the crossfire. First, it was DIDI then the crackdown spread to other names such as Tencent Music (TME) and Tencent Holdings (TCEHY), as well as the education sector. Institutional investors decided enough was enough and began selling their positions or at least reducing them. Cathy Wood’s ARK funds one of the more high-profile sellers.

NIO has not been directly involved as the crackdown has appeared to focus on those companies which generate and store a lot of data on Chinese citizens. But Tesla has previously had some concerns with reports earlier in the year of their vehicles being barred from Chinese military compounds. Tesla has managed to overcome these headwinds and the stock has strengthened recently. Tesla being the sector leader it tends to set the tone and recent gains and strong earnings from Elon Musk's company may have a positive read across for NIO stock.

July 27 marked the recent low and NIO has managed to recover well from here but has not yet broken higher to end the bearish trend. We can see the series of lower lows and lower highs. In order to break this trend, NIO needs to break $47.39. The current price zone is a high volume traffic area, so it is no surprise NIO is stuck here. Breaking $47.39 should see a sharp move higher as the volume profile is pretty light above here, meaning the price should accelerate.

Recent earnings from Electric Vehicle makers have been strong and delivery numbers showing impressive growth. Tesla, the sector leader, led the way. We are therefore skewing our view to NIO posting strong numbers and the stock breaking $47.39 and accelerating higher over the next few sessions. We would caution against taking a position before earnings but instead look for earnings to confirm our view of a break of $47.39 and then an acceleration. Otherwise, the stock will remain in a bearish trend with the next support zone in the low $30s. 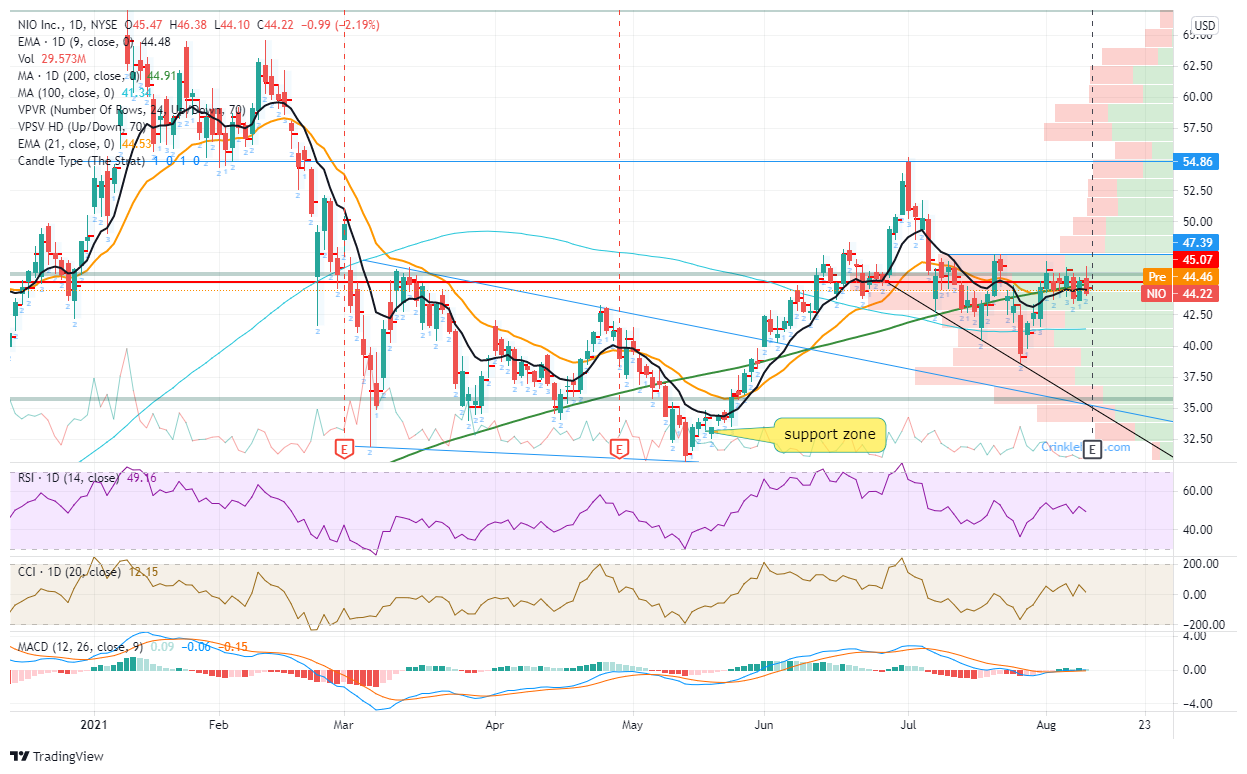 Update: NIO ended Thursday at $42.47, down 3.35%. Stellar Q2 earnings fell short of boosting the share in a risk-averse environment. Wall Street suffered from higher than anticipated US PPI, which revived concerns about heating US inflation. The shared bottomed for the day at $41.55, bouncing just modestly ahead of the close, as the three main indexes managed to end the day with modest gains. The DJIA added roughly 14 points, while the S&P 500 advanced 11 points, both reaching fresh all-time highs.

Update: NIO is starting to lose ground in early trading on Thursday as investors mull over the delivery numbers showing growth as slowing. The headline and read through was pretty solid with strong revenue generation and earnings ahead of forecasts but delivery growth has slowed somewhat. This also happened earlier in the year and strong plans for new models may kick start the growth process. $38.66 is the key support and $ 47.39 needs to be broken to end the medium-term bearish trend.