Update April 8: Nio Inc (NYSE: NIO) has dropped by 6.8% to close at $37.27 on Wednesday. The main downside driver comes from the global chip shortage, which is halting the production of cars all over the world – and has now reached the Chinese carmaker. William Bin Li, CEO of NIO, said that while the firm produced its 100,000th vehicle, the output is limited to 7,500 cars due to the shortage that is gripping the world. Thursday's pre-market figures are pointing to an upswing.

NIO said on Tuesday that its first white ET7 body had rolled off the production line. The ET7 is a sedan vehicle adding to NIO's lineup, which has mainly focused on the SUV segment.

NIO shares rose nearly two percent on Tuesday as sentiment was boosted by the Warren Buffet=backed BYD releasing sales numbers. BYD announced that its sales increased 113% in Q1 2021 versus the same quarter last year. BYD shares actually closed lower on Tuesday but had moved higher in the days preceding the sales numbers, so it looks like a "buy the rumour, sell the fact" situation. Other EV makers were strong, with NIO as mentioned up nearly 2%. LiAuto and XPeng were up more than 2%.

NIO announced late on Tuesday that the first white-bodied ET7 had rolled off its production line on April 1.

Recent delivery numbers from NIO and XPeng were also strong, clearly showing the increasing move from consumers toward electric vehicles.

EV stocks have also been boosted by President Biden's infrastructure plan, which includes strong backing for the EV sector.

The nice MACD crossover buy signal generated on March 31 was not an April Fools joke, and NIO shares moved $4 higher but failed at $42. A retracement is fine so long as it holds the $38/$37.62 level where the move began. A break below this area is negative. Support is also provided by the 9-day moving avearge at $38. A break of this support area will likely lead to a test of the lows toward $34. The first level to break is the 21-day moving average resistance at $41.12 and then the recent high at $42.06. A break above brings highs at $46 as the target. 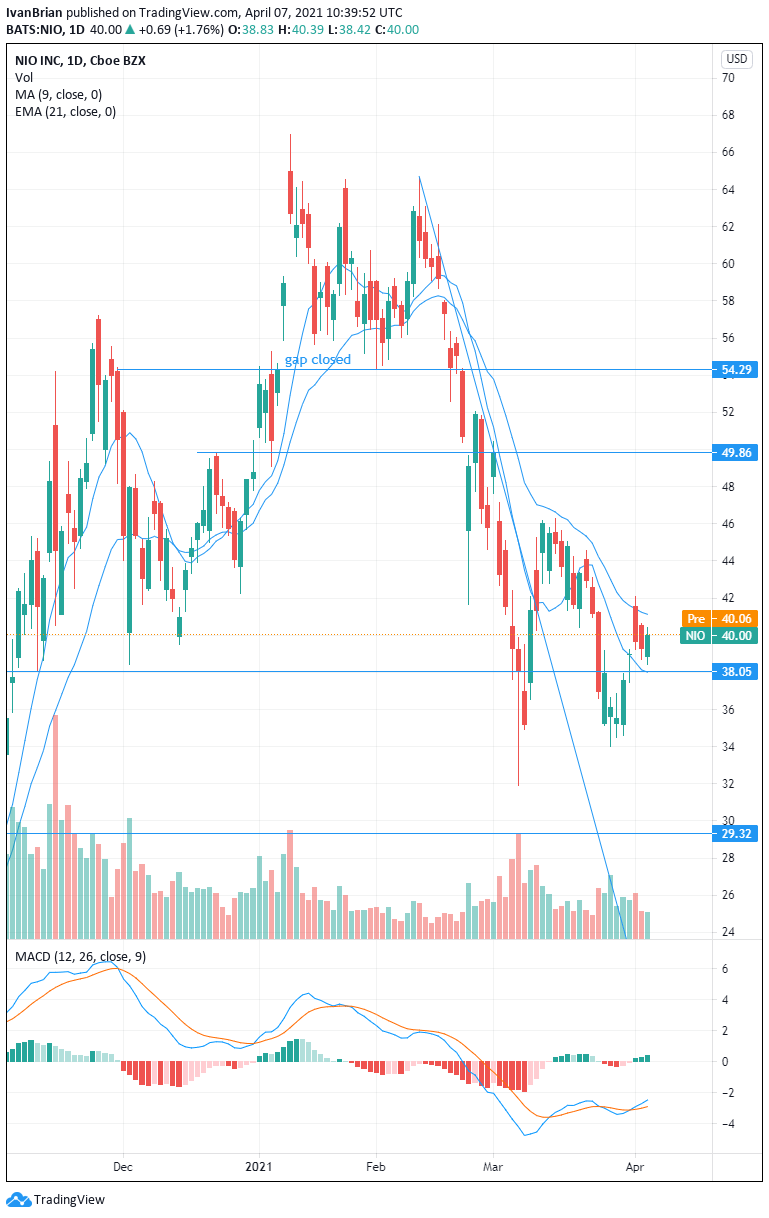 Update: Wednesday sees NIO shares give back Tuesday's gains as the EV sector runs into headwinds. Tesla the leader is down 0.7% while NIO, XPeng, and LiAuto are all lower. LiAuto is to offer a $750 million note offering which is seeing a sharp drop in its shares, down 9%. This is certainly one headwind for toerh related manufactures of which NIO is one.