Update March 26 1400 GMT: NIO shares drop 7% on Friday as the company says it is to suspend production for 5 days due to semiconductor shortages. NIO has been struggling for momentum this week as other meme stocks take centre stage. NIO has also seen huge gains for 2020 so a pull back was probably justified.

Update March 26: NIO closed 2.6% higher on Thursday as tech stocks bounced from early lows. Electric vehicle (EV) stocks caught some momentum as the sector leader, Tesla, rallied to close up 1.6%. NIO had a huge 2020 appreciation, so maybe retail has moved onto other areas, as GME and AMC also posted huge gains on Thursday.

Update March 25: NIO is catching a bounce on Thursday, but the move is not really a convincing one. NIO shares are up 1% at $37.46. The shares are likely catching some effects from a meme rally on Thursday with AMC and Gamestop charging higher. NIO has traditionally been a retail favourite and is up 1% despite the Nasdaq slipping 1% in the opposite direction.

NIO, like most meme retail stocks, is suffering of late as investors become more attuned to the fundamentals of what they are investing in. Now that the momentum trade is fading, just jumping on the trend is not going to work anymore.

NIO was aggressively bid up in 2020 on the back of EV sector hype, hopes for it being another Tesla, and general market frothiness. So is the party over?

NIO is a Chinese EV manufacturer that designs, manufactures and sells smart vehicles. It is also involved in the autonomous driving sector.

Is NIO a good stock to buy?

In a word: No. There are too many unknowns, stretched valuations, and general froth in the market.

The outlook for deliveries disappointed investors. CEO William Li on the analyst call said, "For the first half of this year, we would like to be more conservative."

He added that in the second half Nio is bullish on demand but does not have full visibility.

NIO is not forecast to turn a net profit until 2023, based on the latest Refinitv data, and even then at the current price that would give a P/E of 257. This is a P/E matched by very few companies except maybe Tesla. Investors will seize on NIO becoming the next Tesla.

But investors are saying that about XPeng, Lucid Motors, LiAuto, etc. It is not going to happen for all, if any, of them. Tesla was the pioneer of the whole EV sector. Now many others are following, including every legacy auto manufacturer on the planet. Volvo says it will be fully electric by 2025. Ford plans to be fully electric in Europe by 2025, similar for Jaguar, Landrover and others.

Most auto manufacturers already have electric cars in the pipeline or have already launched them. Volkswagen made the biggest announcement in the sector last week as it aims to drive battery prices down 50% and make half of all sales in the US electric by 2030. Apple and other cash-rich tech companies such as Amazon are entering the EV sector. So the space is getting more and more crowded.

A high valuation with no profit for two to three years in a crowded space with large, well-resourced competitors is just too much gambling for me. The price has moved too far, and I would prefer shares in the low $20s before even considering an investment.

The chart also looks bearish on the longer term view. A bearish head-and-shoulders formation is forming with a downside target of $22. 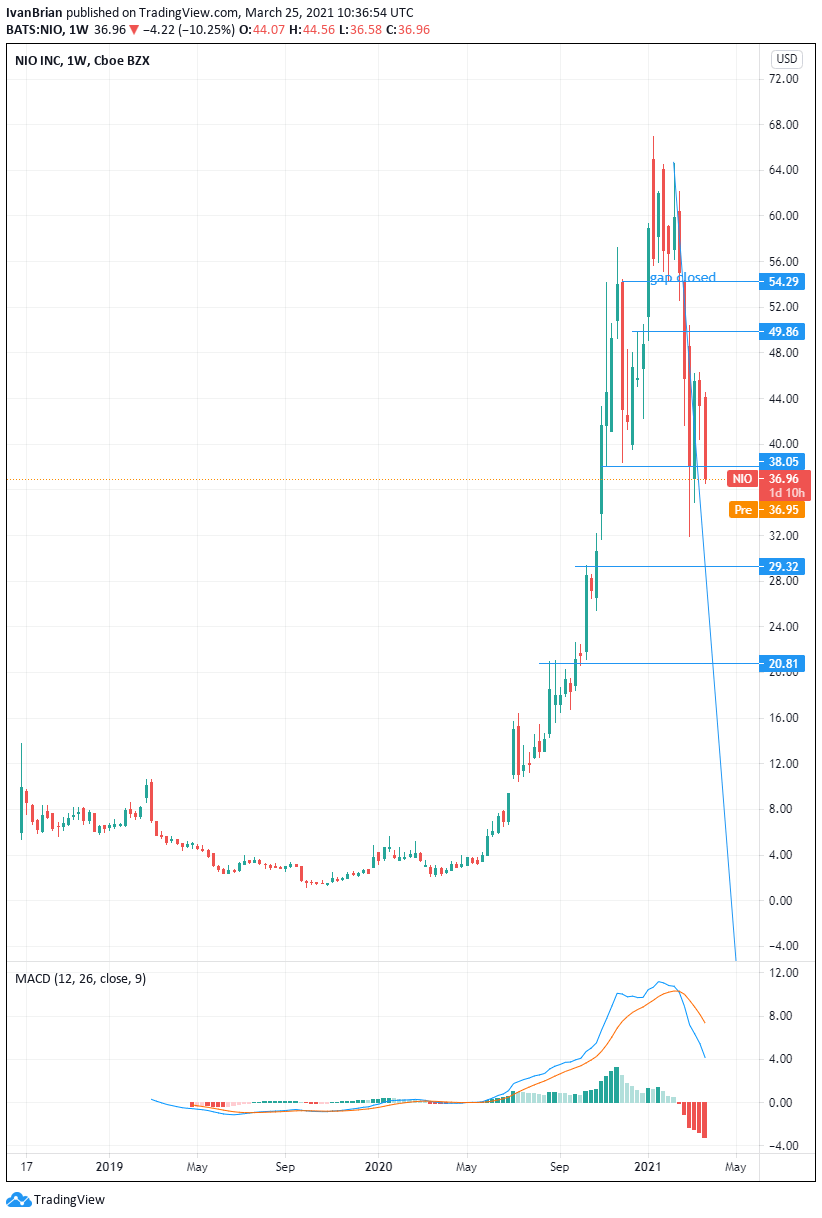