Another day and another steep drop for NASDAQ:NKLA as shares slipped by another 3.36% as the stock closed the trading session at $23.30. As the broader markets furthered the selloff from the previous day, Nikola still dropped significantly more than the NASDAQ which pared off 0.47% and the S&P 500 which actually closed the day higher after a mostly red morning. Investor sentiment of the Arizona-based electric truck maker is at an all-time low right now and more negative press from a significant institutional investor name has caused even more grief for Nikola.

That investor is Worm Capital, a California based investment management firm that recently wrote a letter to its investors that specifically pointed Nikola out as a landmine that they were relieved to have avoided. Worm Capital insists that it was skeptical of Nikola from the start and in their due diligence, saw that former CEO Trevor Milton was merely putting on a show of smoke and mirrors. Whether this is true or not remains to be seen as current CEO Mark Russell has stood by his company, amidst ongoing negotiations with General Motors (NYSE:GM) that would provide Nikola with an OEM partner. 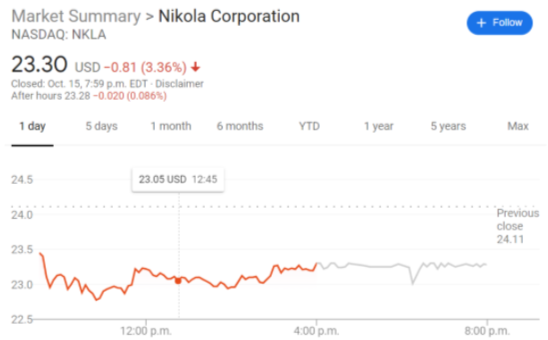 Russell insists that Nikola’s rugged pickup truck prototype, the Badger, can be discarded if GM refuses to sign on as an OEM partner. While Russell remains loyal to his brand, it may not be the best time to be puffing his chest and daring people to call his bluff considering the public perception of his company. The one bright spot for Nikola right now seems to be the battery-powered semi-truck they are building in conjunction with CNH Industrial NV in Ulm, Germany. If the Badger is a lost cause, the semi-truck would certainly be a step in the right direction for a company that is struggling to repair its image.