Update: Sept 3: After the PIPE transaction expiry-led meltdown in NASDAQ: LCID, the EV stock was primed for a sharp rebound, which materialized on Thursday. LCID shares jumped 4.89% to settle at $18.66, having found strong support at $18.00. Positive sentiment in the Wall Street indices helped the recovery in LCID. The recent series of weak US economic data pointed to a downbeat US NFP print, weighing on the Fed’s tapering expectations and pushing US stocks higher. All eyes now remain on Friday’s NFP release for fresh trading impetus for the Wall Street stocks.

NASDAQ:LCID has started the week off just as it ended the last: in the midst of another losing streak for the SPAC stock. On Monday, shares of Lucid fell a further 1.90% and closed the trading session at $20.63. The move lower came during yet another day where the NASDAQ hit a fresh new all-time high on the strength of big tech. High growth sectors were flying on Monday after dovish comments by the Federal Reserve signalled that it would be a slow approach to tapering monetary stimulus and bond buybacks.

September 1st marks the expiration of the PIPE investor lock up period for Lucid’s stock. What does this mean? Most stocks that begin publicly trading have a lock up expiry date where insiders or PIPE investors in the case of SPACs, are finally free to cash in on some of their shares. For private companies who use stock-based compensation, we usually witness a selling off of significant blocks of shares, which could have an effect on the stock’s price. Will this happen with Lucid? That remains to be seen, although it should be noted that the lock up for insiders is six to eighteen months down the road.

It was a mixed day for the broader electric vehicle sector. Tesla (NASDAQ:TSLA) is always the measuring stick for the industry, and shares finished 2.67% higher on the momentum after it announced its intent to sell electricity in Texas. Meanwhile, Chinese EV stocks were trading mostly lower as Nio (NYSE:NIO) and Li Auto (NASDAQ:LI) fell during the session, the latter after reporting its earnings before the markets opened.

Update September 2: Lucid Group Inc (NYSE: LCID) surged on Thursday, adding 4.89% to end the day at $18.66 per share. Wall Street advanced on the back of unimpressive US data hinting at a tepid Nonfarm Payroll report. Weak employment figures will mean a delay in tapering and probably push US indexes further up. The NYSE closed Thursday up 62 points at 16,908.42. 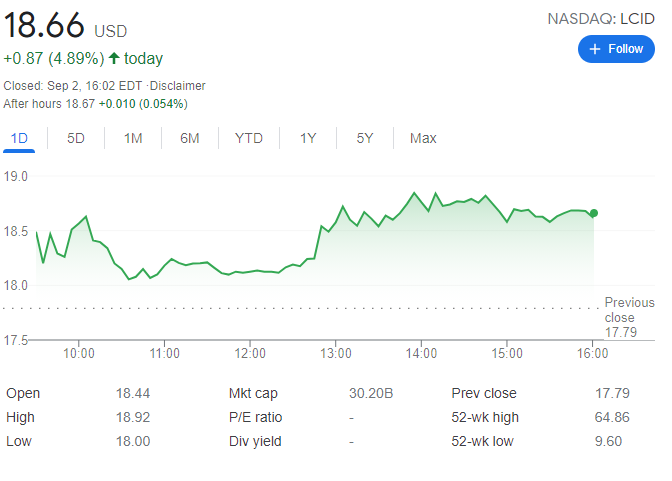 Update: Lucid Group Inc (NYSE: LCID) has closed Wednesday's turbulent trading session at $17.79, a drop of over 10% but significantly above the opening level of $16.12 level. It seems that retail investors saw the expiry of the PIPE lockup period-related fall as a buying opportunity and scooped up shares of the electric vehicle maker. According to after-hours data, LCID is set to open marginally higher on Thursday, trading closer to the $18 mark. Substantial volatility and high trading volume have attracted coverage from the wider press.

Update: Sept 1: PIPE expiry day is here and LCID shares have certainly panicked with a drop of 22% now to just $15.49. The PIPE transaction was done at $15 so there is not much profit to be made from selling for a mere 49 cents but panic creates panic and that is what could be happening here. Meme stocks are volatile with AMC spiking (see here), SKLZ up 14% (see here) PLTR breaking out (see here) and GME playing catchup (see here).

Update August 31: Lucid Group Inc (NASDAQ: LCID) has kicked off August's last trading day with yet another slide, losing some 1% and nearing the psychological barrier of $20. Over the summer month, the electric vehicle company shed some 14% of its value, in what seems like a long "hangover" in response to the completion of the SPAC merger with Churchill Capital Corp IV, which traded with the CCIV ticker. It is essential to note that the broader stock market is ending lower, paring some of its gains recorded during the summer.