NYSE:KODK has been one of the surprise stocks of the year so far as the Trump Administration awarded the former photography titan $765 million to begin producing pharmaceutical ingredients in New York. Shares are now up 72% since the beginning of the week as investors have shown renewed faith in the stock that rocketed up to $60 per share when the loan was first announced. Kodak exhibited a massive spike in trading volume over the past couple of days with a high of 90 million shares changing hands compared to the average trading volume of just over 26 million per day.

The legal investigation came from alleged insider action as the CEO awarded several executives with high volume stock options right before the government loan was announced. As a result, the entirety of the loan was frozen while the SEC looked into Kodak’s actions to determine if they were untoward or not. As a result of the investigation, the stock price took a nosedive from its high of $60 all the way back down to single digits. Now that the loan should be awarded in full, investors are chomping at the bit to get back into Kodak before the production of the pharmaceutical ingredients begins. 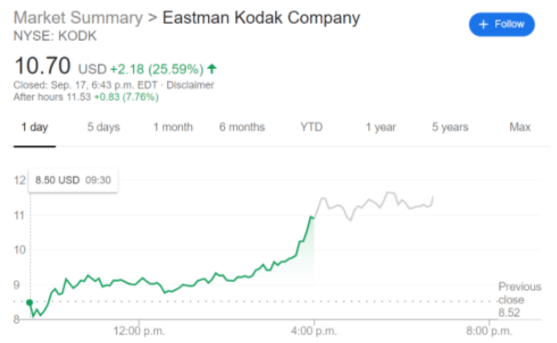 The question remains if Kodak can actually deliver on the production of these ingredients, some of which are believed to be used in the manufacturing of COVID-19 vaccines for America. Kodak has been dormant for years now after the popularity of film cameras went out of style. The market cap of the company has fallen to a measly $809 million and investors are certainly putting their faith into a company that has not been profitable for decades now.