NYSE:IPOB has had an eventful couple of days after Chamath Palihapitiya announced a deal to bring digital real estate company OpenDoor to the public markets via another SPAC IPO. Shares of Palihapitiya’s blank check company surged nearly 40% on Tuesday after the deal was announced, however, on Wednesday investors were singing a different tune. The stock fell 10% which is somewhat unusual for an IPO announcement, especially considering the performance of other recent SPAC IPO announcements like Tortoise Group (NASDAQ:SHLL) which partnered with electric truck company Hyliion and Diamond Peak Holdings (NASDAQ:DPHC) which teamed up with another electric truck company in Lordstown Motors.

SPAC IPOs have been all the rage this year as prospective companies who wish to be publicly traded combine with a so-called SPAC or special purpose acquisition company, to raise capital for an IPO. Some other well-known SPAC IPOs that have debuted this year are sports gaming website DraftKings (NASDAQ:DKNG) and Nikola (NASDAQ:NKLA). IPOB’s agreement with OpenDoor is great timing for the real estate company as the COVID-19 pandemic continues and in-person open houses and face to face meetings are at an all-time low. 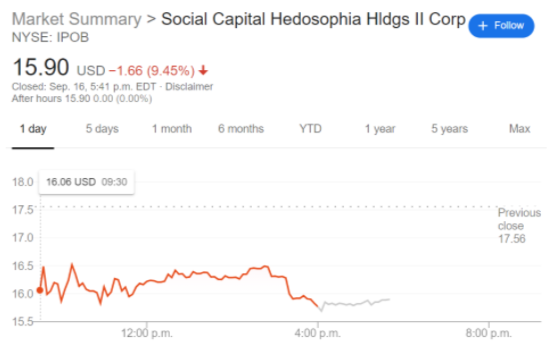 While no details have been given about a go-live date for OpenDoor’s public trading, IPOB could be a decent deal right now at a price that is very affordable for investors. If the recent track record of these SPAC companies is anything to go by – we could see the price of IPOB continue to climb as we approach the transition over to OpenDoor.