NASDAQ:INO has fallen far enough according to investors as bargain hunters flocked back to the biotech firm on Thursday, pumping the stock price up by 7.05% to close the trading session at $11.24. While no real news emerged to warrant the spike, it should be noted that the broader markets rebounded after mixed results for most of the week. Despite the gains made on Thursday, shares traded at a lower volume than on average for Inovio which signals that a few big trades may have been the source for the price jump, given the higher volatility.

Pharmaceutical giant Gilead Sciences (NASDAQ:GILD) received the first approval from the FDA for its COVID-19 vaccine candidate: remdesivir, also known as Veklury. While the drug previously received EUA or Emergency Use Authorization in May, the FDA has now given full approval as well as amending its EUA for use in pediatric patients. Veklury has been shown to reduce the recovery time of COVID-19 patients on average from 15 days to 10 days. Veklury has now been approved for use in nearly 50 countries around the world, including Australia, Canada, Iran, and Japan. 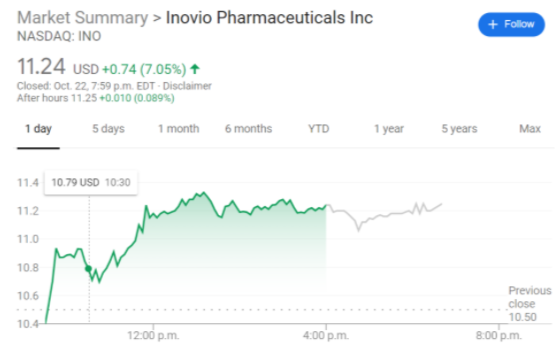 So is this the end for Inovio in terms of a COVID-19 vaccine? Not necessarily, although the chances of INO-4800 being chosen and distributed are fading by the day. Scientists have said that multiple variations of COVID-19 vaccines will be needed to sufficiently control the spread worldwide so just because Veklury has been chosen now, it does not eliminate other vaccines from being chosen in the future.

EUR/USD has extended its gains, nearing 1.1950, but quickly turned negative now trading around 1.1880. The greenback recovers as equities fall as the market’s sentiment turns sour.