NASDAQ:IMMU continued its upward rise towards the acquisition price of $88 per share that Gilead Sciences (NASDAQ:GILD) has agreed to pay for the biotech firm based out of New Jersey. Shares climbed a further 1.32% on Tuesday closing the trading session at $84.75 – which is down from briefly touching at all-time high prices of $86.91. IMMU stock is now up nearly 890% over the last 52-weeks compared to the 12.57% growth of the S&P 500. Of course, much of this has been enhanced by yesterday’s surge, so the true number pre-acquisition was still up nearly 380%.

Gilead investors seemed slightly more apprehensive about the deal, despite openly urging the pharmaceutical giant to start spending some of its large cash reserves. Before the deal to acquire Immunomedics, Gilead was sitting on about $30 billion in cash and had not made an acquisition since its 2017 purchase of Kite Pharma – a deal that probably did not turn out as lucrative as Gilead had hoped. The deal for Immunomedics cements Gilead's position in the oncology market and provides them with a tumour treatment that the behemoth was sorely missing. Trodelvy is Gilead’s first foray into breast cancer tumours as the other two treatments they have, Yescarta and Tecartus, are for treating blood cancers. 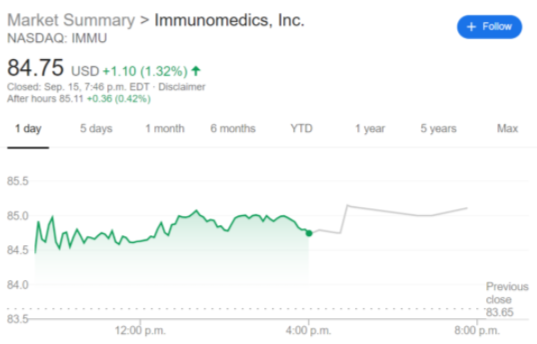 IMMU investors are still riding high after Monday’s jump and the fact that the stock continued to rise on Tuesday shows that not many are taking their profits and leaving. Trodelvy will provide an estimated $3-4 billion a year for Gilead, so the steep price that they did pay for Immunomedics should prove to pay itself off within a few years.

Forex Today: Dollar declines on hopes for a US fiscal deal, ahead of presidential debate

Stock markets remain cautiously optimistic and the dollar is on the back foot, extending the reversal from last week's moves. Investors are eyeing a slew of Federal Reserve speeches, fresh hopes related to Brexit, and the first presidential debate.