Gold Price (XAUUSD) fades the Fed-inspired recovery as it retreats to $1,830 ahead of Thursday’s European session. The yellow metal rallied the most in a month the previous day after the Federal Reserve (Fed) roiled the markets. The bullion’s latest weakness, however, could be linked to the US dollar’s recovery moves amid a sluggish trading session.

The US 10-year Treasury yields rebound from an intraday low of 3.288% to 3.32% by the press time. Even so, the benchmark bond coupons remain negative for the second consecutive day, down 7.3 basis points (bps) at the latest. It’s worth noting that the bond coupons dropped the most since early March after the US Federal Reserve announcements. 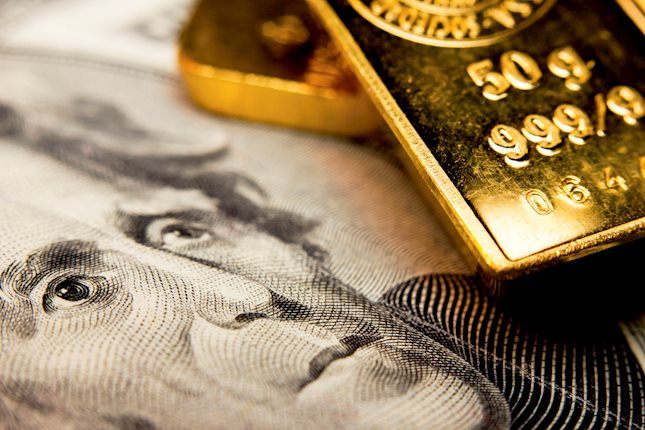 Bank note and a gold bullion

On Wednesday, the US Federal Reserve (Fed) announced the biggest interest rate hike since 1994 to battle inflation fears. The US central bank also revised inflation forecasts for this year and the next while cutting down the inflation expectations. Further, the policymakers also signaled either a 50 bp or 75 bp rate hike in the next meeting. However, the Fed’s rejection of the odds of a 100 bp rate increase and Chairman Jerome Powell’s measured comments seem to have triggered a relief rally in the Gold Price. However, major central banks remain on the path of higher rates, which in turn favors the bond sellers and weighs on XAUUSD prices.

Headlines from China seem to exert downside pressure on the gold prices of late. Be it the coronavirus fears or the Sino-American rivalry, recently over Taiwan, the pessimism surrounding one of the world’s biggest gold consumers challenges the XAUUSD rebound. It’s worth noting that overseas investors appear to have lost confidence in China, which in turn suggests further hardships for the dragon nation. “Overseas investors reduced holdings of Chinese bonds for a fourth consecutive month in May, and at the fastest rate in nearly five-and-a-half years, as diverging monetary policy kept Chinese yields pinned below their U.S. counterparts,” said Reuters.

The options market continues to flash the traders’ bearish bias, despite the previous day’s corrective pullback in Gold Price. That said, an index to gauge options market mood, namely the risk reversal (RR) braces for the biggest weekly fall in a month with the current print of -1.120. It’s worth noting that the RR is a difference between the market bullish and bearish bets, respectively known as calls and puts.

Fed Chairman Jerome Powell is up for a speech at the Inaugural Conference on the International Roles of the US Dollar, in Washington DC, on Friday. The US central banker recently praised the US economic transition and tamed the market’s fears of higher rates while showing readiness to reach a 2.0% inflation target. Should the policymaker reiterate hawkish expectations from the US economy and turns down expectations of witnessing 100 bps rate hikes, as some in the markets expect, the XAUUSD will have more downside to track.

Gold Price fades the Fed-inspired rebound from a one-month-old horizontal resistance while reversing from 23.6% Fibonacci retracement of April-May downside. The pullback moves, however, remain doubtful amid a recovery in the RSI (14) line and recently firmer MACD signals.

Even so, an upside clearance of the $1,837 immediate resistance may not be enough to recall the XAUUSD buyers as a convergence of the 100-SMA and 200-SMA, around $1,848, will be a strong resistance to watch. Should the quote rises past $1,848, an upward sloping trend line from May 24, near $1,880, will act as an extra filter to the north.

Alternatively, pullback moves could eye to retest the aforementioned monthly support near $1,805. Following that, the $1,800 threshold will act as a validation point for the further downside of the Gold Price.

The Fed to set gold surging?